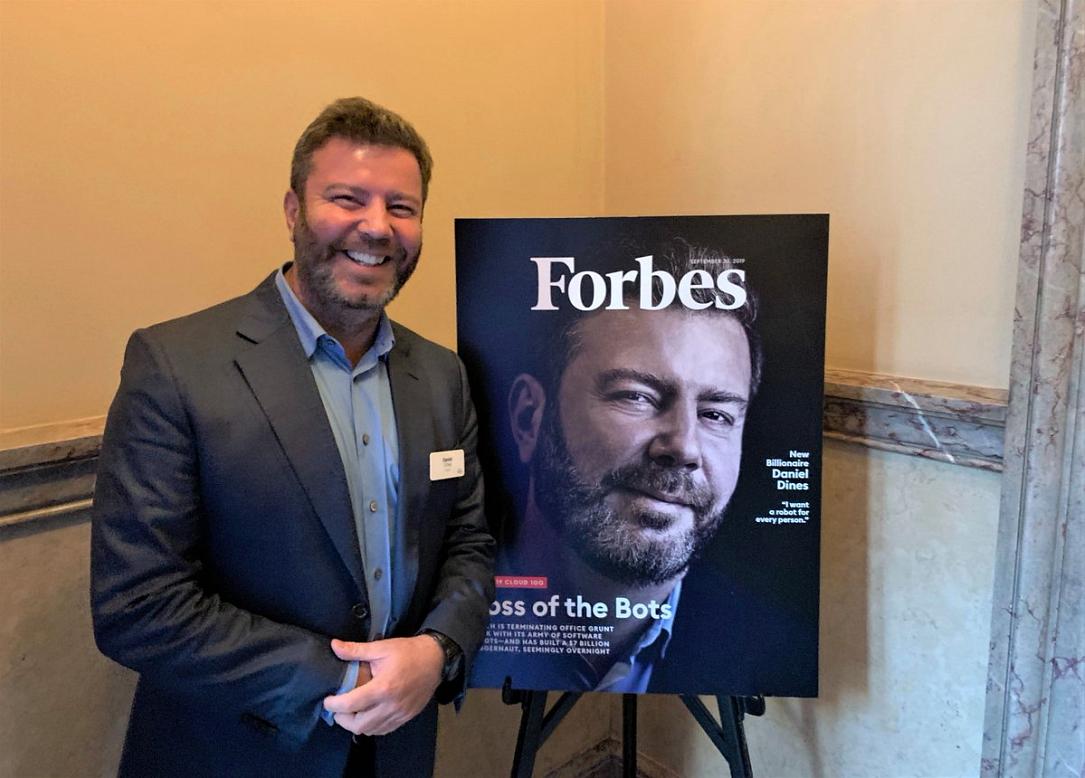 Forbes, the famous American business magazine following the stories of the world’s richest, has published an ample feature dedicated to Romanian Daniel Dines, the founder and CEO of UiPath, the biggest robotic process automation (RPA) company in the world.

“From Communism To Coding: How Daniel Dines Of $7 Billion UiPath Became The First Bot Billionaire,” is the title of the cover, which can be read on the Forbes.com website. Dines will also appear on the cover of the print issue of Forbes magazine, to be released on September 30, where he is presented as "Boss of the Bots".

In his feature, Forbes associated editor Alex Konrad follows Daniel Dines at the UiPath office in Bucharest, where he founded the company, now valued at USD 7 billion, as he conducts a meeting with his team: “Looking over central Bucharest, Romania, where he hatched UiPath, Dines rousts a product executive in Bellevue, Washington, where it’s 6:30 a.m. ‘I want you to rethink this,’ Dines says. ‘This feels very complicated to me. It should work like Gmail works.’”

The article tracks the company’s fast rise and the way it managed to become the leader of this hot sector, although it didn’t invent the virtual bots: “Dines, 47, didn’t invent RPA, but he’s adroitly positioned himself to dominate it. Two years ago, when European investors valued it at $110 million, UiPath was a little-known company of 150 based in Romania that had just booked less than $5 million in revenue. Today it’s headquartered in a gleaming skyscraper on Park Avenue in Manhattan and employs 3,200 in more than 30 offices around the world. It generated $155 million in revenue last year and expects to double that this year. The shift has shot it to No. 3 on Forbes’ 2019 Cloud 100. In April, Wall Street investors including Wellington Management pumped in $568 million, at a valuation of $7 billion, making Dines, who owns more than 20%, the world’s first bot billionaire.”

In his interview with Alex Konrad, Daniel Dines talks about his first steps in programming, his years working for Microsoft in Seattle, how he started the firm in 2005, how he got into RPA after a working visit at an Indian client, and how he landed the first big clients. He also recalls how he negotiated with Japanese investor Masayoshi Son, the manager of SoftBank’s Vision Fund, a USD 100 billion investment vehicle, who wanted to invest USD 1 billion in UiPath in exchange for more control over the company but also speaks about his mundane habits. “Dines wakes up most mornings and reads until he’s bored, an hour or more, then takes a quick nap. Only then—11 a.m. when he’s in Romania (Dines swears he’s a bit earlier in New York)—does he deign to open WhatsApp and Slack,” reads the Forbes article.