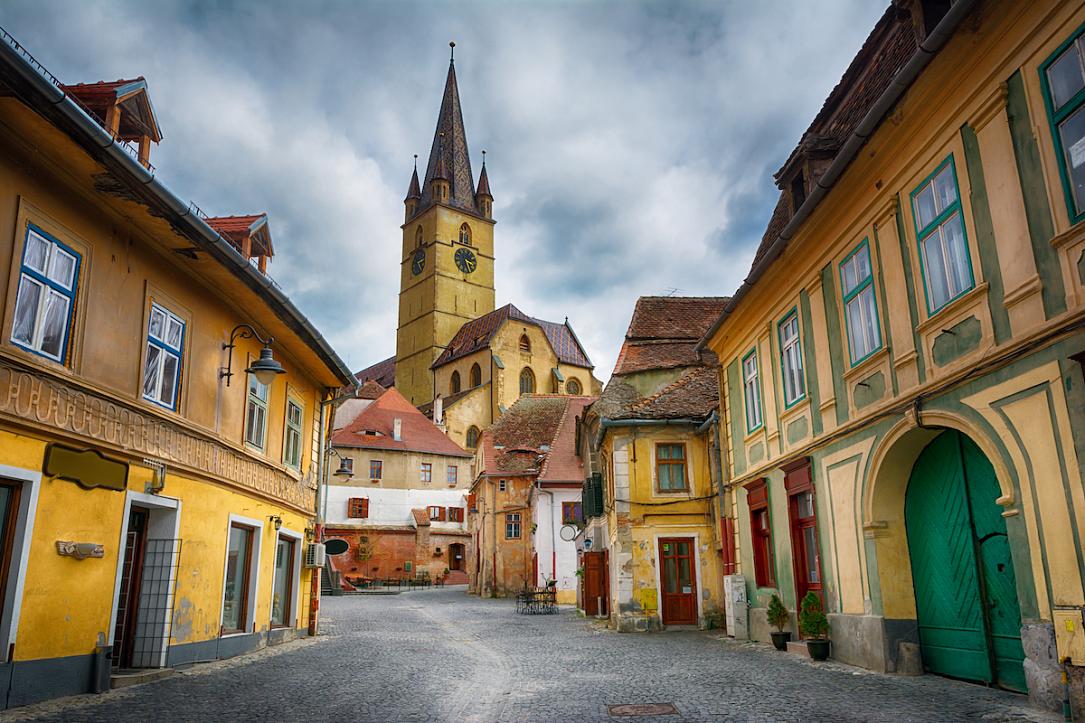 All eyes are on Sibiu these days, as this beautiful city in Transylvania is the place where European leaders meet on May 9, 2019, to discuss the future of the European Union. But there are plenty of reasons to visit Sibiu in any other day of the year, especially as this region holds the European Region of Gastronomy title this year. Visitors also have many tourist attractions to discover in this Transylvanian city, and plenty of events to choose from throughout the year.

One of the first things people notice when visiting Sibiu is its medieval charm. Its towers, stairs and narrow passages in the medieval center, combined with the colorful houses, fortified churches, and centuries-old buildings give visitors the sense of going back in time while still enjoying all the advantages of the present.

Sibiu, also known as Hermannstadt, is one of the seven walled citadels built by German settlers in Transylvania in the 12th century. It was already an important trade center in the 14th century, being for centuries the most important German citadel in Transylvania. The craftsmen of the city were organized in guilds, and in 1376 a number of 19 guilds were known. It was declared a city in 1366.

The majority of its population was ethnic German until 1941, which explains the Germanic feeling of the city. However, the ethnic Germans (called the Transylvanian Saxons) emigrated to Germany and Austria between the 1950s and until after the 1990s, but some still live here. A top personality of Romania born in Sibiu to a Transylvanian Saxon family is Klaus Iohannis, the current president of the country.

Sibiu is a city best discovered by foot, this giving visitors the opportunity to discover the entire historic center and its secrets and stories. All that while taking the best pictures from the Council Tower, enjoying the local food in the city’s beautiful public squares, or visiting its many tourist attractions

The "houses with eyes"

The “eyes” watching the visitors and locals alike from the houses’ roofs have become a real trademark of Sibiu and one of the city’s main attractions. These “houses with eyes” probably appear in most tourists’ photos, as it’s almost impossible not to notice them and wonder what’s their story.

Although some could feel like the Big Brother is watching them almost all the time, these “eyes” have a rather practical purpose, being ventilation windows for the houses’ attics. However, some say that, during the Communist period, the locals believed these “eyes” were built to scare them, to make them think that they were being watched.

The many tourist attractions

Although a medium-sized city, Sibiu is home to many tourist attractions. Take, for example, the Great Square (Piata Mare), where visitors can find the Brukenthal Palace – home to one of Romania’s most important art collections, and the Roman-Catholic Church. But there are two other beautiful squares in Sibiu, namely the Small Square (Piata Mica), which is linked to the Great Square by a passage beneath the Council Tower – the best spot for taking pictures in Sibiu, and the Huet Square, which has the Evangelical Cathedral right in the center.

And, of course, there is the Bridge of Lies (photo above) - the first bridge in Romania to have been cast in iron and a symbol of the city of Sibiu. This bridge surrounded by beautiful, old buildings has become quite popular among tourists mainly due to the legends surrounding it. According to one of the legends (and the most well-known), if a person tells a lie while on it, the bridge is supposed to creak.

But there are plenty of other places to see in Sibiu, such as churches, museums, and the city’s towers.

Probably one of the most famous outdoor attractions of Sibiu is the Museum of Traditional Folk Civilization ASTRA (photo above) – the perfect place to discover the old traditional village life in Romania while enjoying some time outdoors. The museum hosts the largest open-air ethnographic exhibition in Europe, offering visitors the chance to see old mills, wooden churches, and traditional houses, among many other things.

For those who feel like taking a break from visiting places and just take a relaxing walk, there’s the Sub Arini Park, a very popular spot among locals throughout the year. Sibiu residents go there in the summer to escape the heat and admire the beautiful flower arrangements, while in winter the park turns into a great place for sledding.

A wide variety of events

The EU summit hosted by Sibiu on May 9 is just one of the many events happening in Sibiu this year, the city hosting a wide variety of events throughout the year.

One of the most important events is the Sibiu International Theater Festival (June 14-June 23), which is expected to bring 3,300 artists from 73 countries to the city this year. Some 540 events are scheduled for the ten-day festival, its 2019 theme being “The Art of Giving.” Then, there is the Sibiu Jazz Festival (May 16-19), one of the oldest festivals of jazz in the world, and ARTmania Festival (July 26-27), which won the Best Small Festival title at the European Festival Awards 2018. Moreover, Sibiu also hosts one of the most beautiful Christmas fairs in the country.

But the region of Sibiu, which includes the city of Sibiu and its surroundings, is the European Region of Gastronomy 2019, and this means there will be plenty of events organized in the city that will help visitors discover the amazing taste of the local food and beverages. For example, happening this month is the VINO festival of urban gastronomy, which will take place in the Tineretului Park in Sibiu between May 17 and May 19. A few weeks later, a similar event will be organized in the city’s Great Square – the Sibiu Street Food Festival (June 6-9).