Ridesharing operators in Romania start petition to have their services regulated 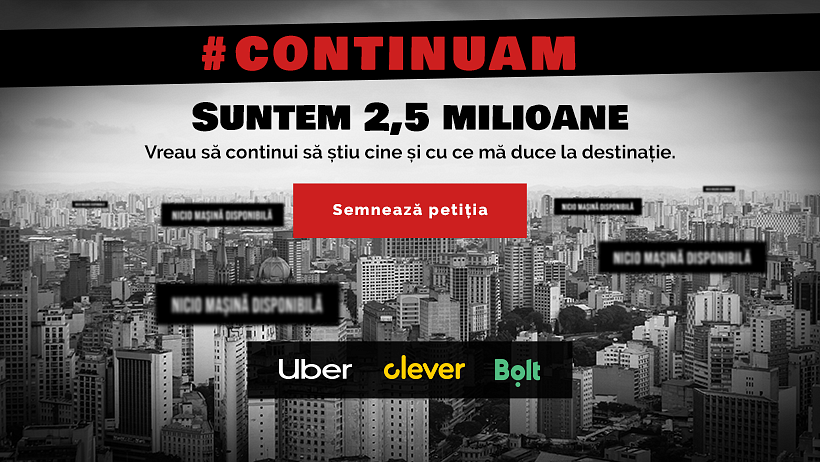 The Coalition for Digital Economy, an organization representing ridesharing companies Uber, Bolt and Clever, have launched the petition #continuam, asking for the urgent regulation of ridesharing services.

It comes after a government emergency ordinance (OUG), that came into force on May 16, brought several changes to the law regulating taxi services. The main change allows the Police to fine drivers providing transport services without a taxi license on the first offense and even hold their car plates. Transport minister Răzvan Cuc said the OUG was not aimed at banning Uber or similar services and advised the drivers providing transport services through the Uber and Bolt apps to go to court if sanctioned by the Police.

The coalition argues that only an OUG regulating the ridesharing services will ensure that these keep running at full capacity and prevent abuses from partner drivers.

“The association points to the fact that the wrong interpretation of the changes brought to the Taxi Law last week coupled with the lack of specific regulation led to numerous actions taken against drivers: fines, license plates taken by the Police, event acts of violence. As such, the number of active drivers on these platforms went down by 25% in one day and the waiting time for requests placed through the three apps increased to over 10 minutes,” the coalition said in a press release.

The ridesharing segment brings direct and indirect benefits of over RON 1 billion (EUR 210 million) yearly and offers a job to over 20,000 partner drivers, the association said.

By May 21 midday, the petition gathered more than 37,000 signatures. It can be signed at continuam.ro.