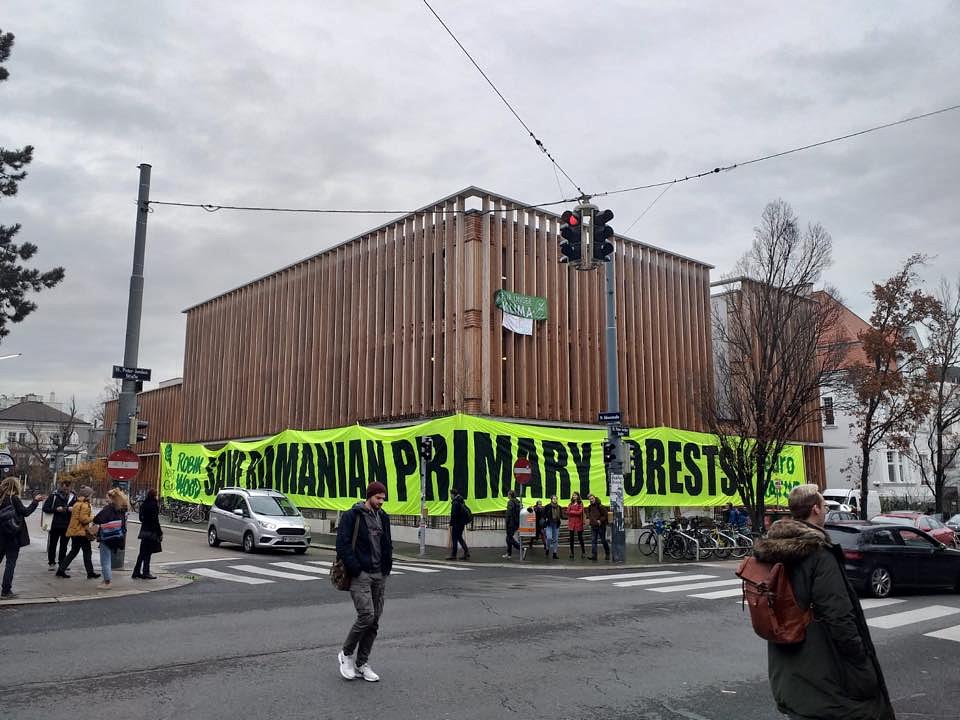 On Friday, environment activists in Vienna also went with the same banner to the BOKU University in Vienna, where timber producer Holzindustrie Schweighoffer organized a promotion event.

Austrian group Holzindustrie Schweighoffer, controlled by Gerald Schweighoffer, is the biggest timber producer in Romania. The group has been at the center of several scandals in Romania in recent years, being accused of buying and processing wood coming from illegal logging operations in Romanian national parks and other protected areas.

The problem of illegal logging in Romania came back under the spotlight recently after a forest ranger in Maramures county, in northern Romania, lost his life in violent circumstances and the local media reported that he was murdered by timber thieves. However, nobody was officially prosecuted in this case and the investigators seem to believe the ranger’s death was an accident.

Environment organizations active in Romania have constantly tried to show that the illegal logging phenomenon in Romania is more serious than the authorities acknowledge officially. A study carried out by a team of forestry specialists, with financing from the EU, shows that 38 million cubic meters of wood disappear each year from Romania’s forests, double the quantity of wood exploited officially. The new environment minister Costel Alexe recently said he believes the report’s conclusions are real after the previous Government tried to keep the figures in this report secret.

The protest of the environment activists in Vienna also targeted oil and gas group OMV, which also owns the biggest oil and gas company in Romania – OMV Petrom.