Skip to main content
Culture & History
Romania – 30 years of democracy: 1992, the year of many emotions 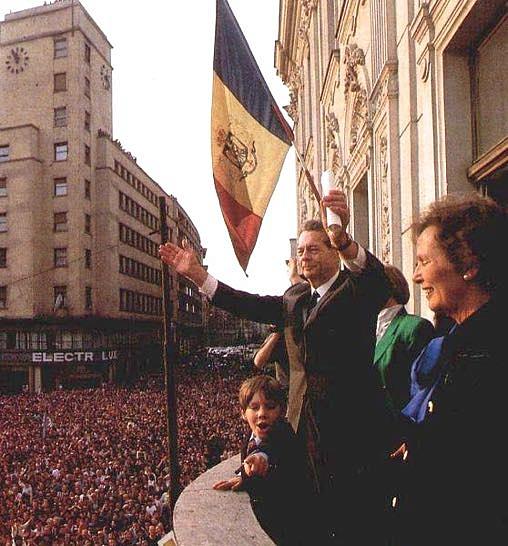 This year, Romania will celebrate 30 years since the 1989 Revolution, which marked the fall of the Communist regime led by dictator Nicolae Ceausescu, and the country's turn to democracy. This article series by Romania-Insider.com is a year-by-year look into the major events that have shaped today's Romania.

1992 was a year of many emotions, with Romanians passing from the tensions of electing new ruling politicians to the frenzy of seeing the king after decades and the hysteria of the first Michael Jackson concert in Romania.

The year began with a census, which came to show the Romanian population had grown since the previous count in 1977. Then, the Romanians were called to vote the mayors and local councilor in the first free local elections since 1937, and, later the same year, to also elect the president and MPs. Once again, Ion Iliescu was elected president by a wide margin.

Meanwhile, King Michael I managed to see his home country after decades of exile, being welcomed by many Romanians but not so welcomed by the political power of the time. And, after the strong emotion of seeing their king, the Romanians had another big surprise in the fall, when superstar Michael Jackson had his first concert in Romania. And while it was an incredible show for the Romanian fans, the concert was also turned into a political tool by the two main candidates running for president.

The first free local elections in more than 50 years

On January 6, 1992, the 128 legally registered political parties in Romania kicked off the electoral campaign (although some of them formed political alliances during the campaign). A series of interventions marked the start of the electoral campaign, meaning that each party had a short intervention at the national radio-TV broadcaster. In fact, it was the first time when local TV stations took part in the election campaign, interviewing local politicians.

The campaign for the local elections ended after exactly one month, on February 6, 48 hours before the first poll. At that time, more than 16.6 million Romanians aged over 18 had the right to vote. Over 12,100 candidacies were registered for the mayor office across the country, of which 35 for the Bucharest mayor position, while almost 120,000 were running for seats in the local councils. The National Salvation Front (FSN), the political organization that was the governing body of Romania, had most candidates for both mayor and local councilor positions.

The first round of elections was organized on February 9, 1992. More than 148 journalists were accredited for this major political event, including 69 from large press agencies from abroad, such as Reuters, TASS, AP, AFP, Novosti, and MTI, as well as from radio (BBC, Free Europe) and TV stations. After this first poll, FSN won 764 mayor seats (of a total of 1,340 positions filled after the first round), the Democratic Convention won 100 seats, and the Hungarian Democratic Union UDMR – 117 seats. The rest of the positions were split between the Democratic Agrarian Party (70), the Romanian National Unity Party (38), independent candidates and other parties.

The second round of elections was organized on February 23, and was not as popular as the first poll, with only slightly over 50% of voters choosing a candidate. FSN has once again scored a nationwide victory but the Democratic Convention won Bucharest (both the general mayor seat and the district mayors).

For the second time after the 1989 Revolution, in the fall of 1992, Romanians were called to elect a new president and a new Parliament. Following long negotiations between all political factors, September 27 was set as the date for both presidential elections and the elections for the Senate and Chamber of Deputies. It is worth noting that, compared to the elections of 1990, the number of candidates running for president doubled in 1992. Also, an independent was among candidates, a first for the presidential elections in Romania.

Romania’s first post-communism president, Ion Iliescu, was also running for a new term. However, this time he was supported by the Democratic National Salvation Front (FDSN), formed by Iliescu and his supporters in April 1992, after the breakup of FSN. Former prime minister Petre Roman was now the president of FSN.

Iliescu’s most powerful opponent was Emil Constantinescu, who was proposed by the Romanian Democratic Convention (CDR). Communism remained the main theme during the electoral campaign, with Iliescu still holding to the revolutionary rhetoric, telling voters that he was “in the midst of the fire” in 1989. Meanwhile, Constantinescu chose to focus his campaign on the big black spots of the years 1990 and 1991 and the two mineriads, as well as on the neo-Communist aura of his counter-candidate, Ion Iliescu.

The FDSN candidate Ion Iliescu won the first round of the presidential elections organized on September 27, with a score of 47.34%, while Emil Constantinescu came second with 31.24% of votes. The two confronted once again in the second round, which took place on October 11, and Iliescu was elected president of Romania with 61.43% of votes. FDSN also won most seats in the Senate and the Chamber of Deputies, followed by CDR and FSN.

Iliescu was sworn in as the new president of Romania on October 30, 1992. More than two weeks later, on November 19, the two houses of the parliament gave the vote of confidence to the new government and the next day prime minister Nicolae Vacaroiu and his ministers were sworn in. Thus, by the end of 1992, Romania changed its entire political management but somehow kept the old players in the game.

King Michael I returns home after decades of exile

One of the most emotional events of 1992 was the return of King Michael I to Romania after a long exile. In fact, he tried and succeded to enter Romania in December 1990 but the authorities stopped him on the road to Curtea de Arges and sent him back to the airport. This time, in April 1992, he got two spend three days in Romania and most Romanians were happy to see him.

King Michael I opposed the instauration of the communist authority starting 1944 but was eventually forced to abdicate on December 30, 1947. He lived in exile until 1992 when he made a three-day visit to Romania, for Easter, together with his wife Queen Anne. Almost one million people welcomed him, according to media reports of the time.

The king went to Putna, Bucharest and Curtea de Arges, and attended Easter religious ceremonies. In Bucharest, because he did not receive permission from the authorities to speak from the Royal Palace, King Mihai I addressed the crowd from the balcony of a hotel. Hundreds of thousands of people listened to his speech, applauding him and chanting his name and the slogan "Monarchy saves Romania! (Monarhia salveaza Romania!)".

However, the spectacular way in which the Romanians welcomed King Michael I worried the political power of the time. Thus, from 1993 to 1997, King Michael was once again refused entry to Romania. He died on December 5, 2017 far away from his home country, in Switzerland. He was 96 years old.

The King of Pop plays in Romania for the first time

Right in the middle of the presidential elections, the Romanians had to face even more strong emotions, this time triggered by the first concert of the “King of Pop” Michael Jackson in Romania. This was also the first performance of an international mega-star in the country after the fall of Communism.

Michael Jackson’s concert in Romania was indeed one of the most important events of 1992. In a country that was in turmoil, where the population was still going through many changes hoping for the best, such an event came to give more hope that Romania was being put back on the world map. But this event was also swallowed by the political battle, especially as it was organized between the two rounds of the presidential elections, and thus none of the two main candidates – Ion Iliescu and Emil Constantinescu – missed the chance to take advantage of the moment and use the superstar’s image for their campaign.

However, the event was in the end what it was expected to be – a massive concert that created hysteria among the artist’s fans. About 70,000 people attended the historical concert organized on the national stadium in Bucharest, screaming Michael’s name, crying or even fainting when seeing the superstar. The impressive effects, complex scene, set, and costumes, which changed frequently during the concert, simply fascinated the Romanians. The story repeated in 1996 when the “King of Pop” returned to Romania.

The first census after the 1989 Revolution

The year 1992 also began with the first census held in Romania after the Revolution. And it was a census of records, showing the population of Romania had registered a big increase since the previous count of 1977.

The census began on January 7 and ended one week later, on January 14. It came to show Romania’s population reached a record of 22.81 million people, up from 21.5 million at the census of 1977. The count also brought to light two other records, namely a record population in Bucharest – over 2 million, and a record urban population – almost 12.4 million. The only category that saw a drop compared to previous counts was the rural population, which in 1992 was of 10.41 million people.

The next two censuses (in 2002 and 2011) revealed the Romanian population began to shrink.

An important event of the year 1992 was the introduction of the Value Added Tax (VAT) by the government. This happened on July 1 and came to replace the tax on the movement of goods. Its value was set at 18% and its introduction led to an increase in consumer prices but had a stimulating effect on investments and exports.

Multinationals, such as Procter & Gamble, started operations in Romania and the Romanian Commodities Exchange (Bursa Romana de Marfuri) was inaugurated.

In June 1992, the Holy Synod of the Romanian Orthodox Church decides the canonization of Stephen the Great – ruler of Moldova from 1457 to 1504 and Constantin Brancoveanu - prince of Wallachia between 1688 and 1714.