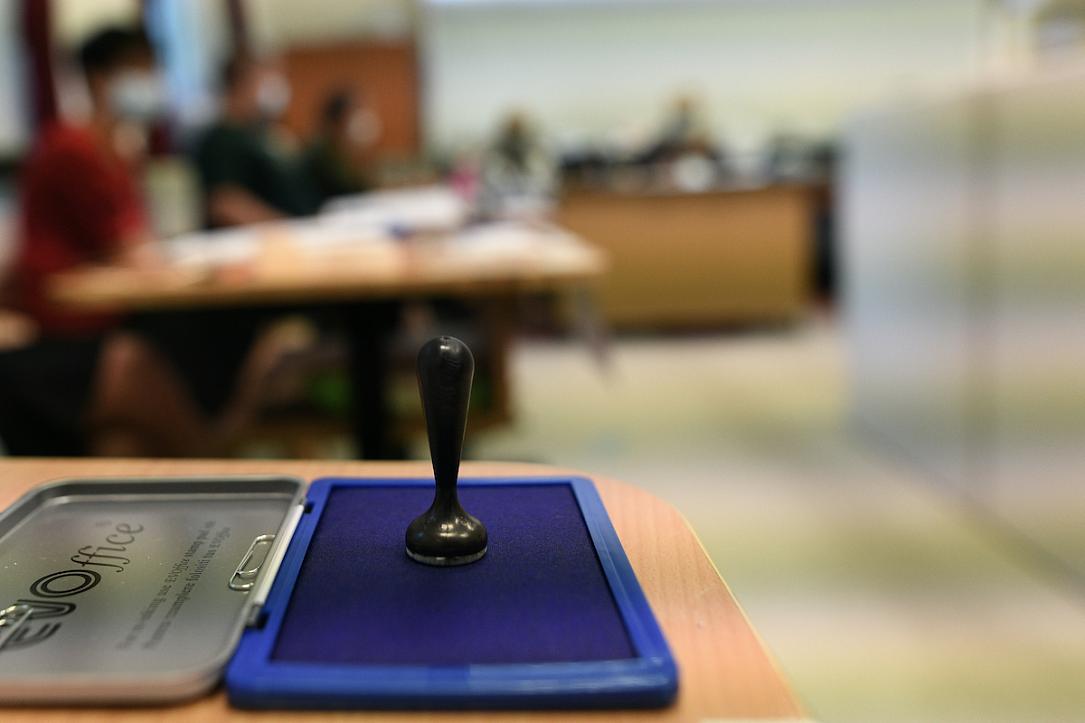 Clotilde Armand, 47, was born in France and became a Romanian citizen five years ago, which allowed her to run in the local elections. Four years ago, she was the mayor of District 1 for only one night, after the exit polls predicted her the winner, but the official results turned the score around and announced the victory of the PSD candidate.

Armand is married to Romanian mathematician Sergiu Moroianu, whom she met in the US while studying at the Massachusetts Institute of Technology (MIT). They decided to move to Romania together in 1999, and they have four children.

As for her political career, Armand is a founding member of the Save Bucharest Union (USB) and Save Romania Union (USR) parties. Since July 2019, she has been a member of the European Parliament.

Clotilde Armand ran for the Bucharest District 1 mayor position once before, in 2016. At that time, the exit-polls presented after the voting closed showed her in front of the Social Democrat (PSD) candidate Dan Tudorache. Still, the official results declared Tudorache as the winner. Clotilde Armand signaled possible frauds at the vote, but nothing changed, and Dan Tudorache remained mayor of District 1.

At the September 27 local elections this year, Armand ran once again against Tudorache for the District 1 mayor seat and won. She was backed by the center-right alliance of the governing National Liberal Party (PNL) and the USR-PLUS Alliance. But the race was tight this year too, and some feared that the 2016 scenario would repeat at these elections as well. In fact, Clotilde Armand and other USR colleagues again accused possible frauds at the vote-counting process. However, the results kept showing Armand as the winner.

Her program for the four-year term at the helm of District 1 - Bucharest's richest district - is available here.

Although very little known in the public space, Radu Mihaiu, 43, managed to pull a fantastic surprise at the local elections held on September 27 and win the race for the District 2 mayor seat. Like Clotilde Armand, he is seen as part of the new generation of politicians in Romania. He was backed by the PNL and the USR-Plus Alliance in the local elections.

Radu Mihaiu, who has been living in Bucharest's District 2 for the past 11 years, is married and has two daughters. He graduated from the Faculty of Mathematics of the University of Bucharest and has a degree in Computer Science.

Mihaiu has been an IT entrepreneur since 2006, being the founder of a company that develops digital applications in many areas, such as education, video games, or online stores. He was also Secretary of State at the EU Funds Ministry of the technocrat government led by the former prime minister and current PLUS leader Dacian Ciolos. From this position, he contributed to the development of an IT system for the absorption of European funds. He then continued to work on digitization projects and initiatives aimed at reducing bureaucracy.

Radu Mihaiu also contributed to the Fara penali in functii publice campaign, gathering signatures for this citizens' initiative to change the Constitution and ban convicted people from holding public office.

He continued his political career with USR. In September 2018, he became the president of the USR District 2 branch.

His program for District 2 is available here.

A member of the Social Democratic Party (PSD) until just a few months ago, Robert Negoita, 48, was re-elected mayor of Bucharest's District 3 at the September 27 local elections for a third term. He ran as a candidate for the Pro Bucuresti 2020 Alliance, with the support of the Pro Romania party of former prime minister Victor Ponta.

Negoita was born in a commune in Prahova county and has built both a business and a political career after the 1990s. In the period 2004-2007, he attended the courses of the Faculty of Law within the Bioterra University, and in the period 2004-2008, the courses of the Faculty of Economics of Domestic and International Tourism within the Romanian-American University, both in Bucharest.

He got involved in business in the mid-1990s, setting up and managing several companies. More precisely, he was the administrator of Euroline in 1996-1998, and in 1998 he founded Pro Confort, a company specialized in flooring products. In 2004 he took over as president of Confort Group. He and his brother Ionut Negoita are among the biggest developers of residential projects in Bucharest. Many of their projects are located in District 3. They also own the biggest hotel in Romania - Rin Grand Hotel.

Robert Negoita started his political career 16 years ago, in 2006, when he joined PSD. In 2006 he was elected vice-president of the PSD youth organization (TSD), while the following year, he launched the Young Social Democrats Entrepreneur League (LTISD) and became its president.

Negoita continued to climb the political ladder in the coming years: in 2008, he was elected executive secretary of the central PSD organization, while two years later, in 2010, he was voted vice president of PSD and president of Ilfov county branch. In 2011 he also became the interim leader of PSD's Bucharest District 3 branch.

The first time Robert Negoita was voted mayor of District 3 was at the local elections of 2012. He won a second term in 2016, and now a third term at the September 27 elections. However, as he was unhappy with the way things were being done in PSD, he decided to leave the party in July this year and run as a candidate for the Pro Bucuresti 2020 Alliance. Following the recent victory at the local elections, PSD leader Marcel Ciolacu said that he proposed Negoita to "return home" (at PSD).

Robert Negoita's plans for the next four years are detailed here.

Daniel Baluta, 43, is the second mayor who managed to get re-elected for a new term and the only PSD mayor left in the capital city. According to partial official results, he managed to get more than half of the votes at this year's local elections, scoring a significant victory against the primary challenger from USR-PLUS.

Baluta was born in Bucharest and spent most of his life in District 4. He is married and has a daughter.

He graduated from the "Ion Creanga" Theoretical High School, and then followed the courses of the Faculty of Dentistry within the "Carol Davila" University of Medicine and Pharmacy. In 2009, following the residency and other specialization programs, he obtained the qualification of primary doctor in general dentistry.

In June 2012, he became a member of the District 4 Local Council, while one year later, he was elected deputy mayor of the same district. In November 2015, following the resignation of mayor Cristian Popescu Piedone, he took over as interim mayor. Several months later, at the local elections of 2016, he was elected mayor of District 4.

At the September 27 local elections, Baluta was re-elected for a second term, and promises to transform District 4 into "the capital of Bucharest." Further details here.

Cristian Popescu Piedone, 57, served as mayor of Bucharest's District 4 for about seven years, from 2008 until early November 2015, when he resigned following the street protests triggered by the fire at the Colectiv nightclub in the capital, which is considered the biggest tragedy in Romania in the last 30 years. On September 27 this year he was elected mayor of District 5, backed by the Social Liberal Humanist Power Party (PPU-SL).

Cristian Popescu Piedone was born in Bucharest. He graduated from the Dimitre Gusti High School in Bucharest and later continued his studies at the University of Petrosani, which he graduated in 2002.

Piedone also tried his luck in business in 1990, when he opened a restaurant in Bucharest and entered politics in 1994 when he joined PSD. He quit the Social Democrats to join a smaller party, and in 2008 ran for the District 4 mayor seat as a candidate of the Conservative Party. He was re-elected in the June 2012 elections with a massive score of over 80%, but he didn't complete his second four-year term as mayor of District 4.

On October 30, 2015, a fire broke out at Colectiv, a very popular club in Bucharest, killing dozens of people and injuring many more. Since mayor Piedone was the one who authorized the nightclub, the protesters who took to the streets after the Colectiv tragedy demanded his resignation. He resigned five days later, on November 4.

In December 2019, Cristian Popescu Piedone was sentenced to eight and a half years in jail in the Colectiv club fire case. However, the sentence ruled by the Bucharest Court was not final. A final ruling is expected in the first months of next year.

He is now the newly elected mayor of District 5, the poorest district of Bucharest, and promises to change the citizens' lives for the better. He stays in touch with his followers and voters on social media - here.

Liberal Ciprian Ciucu, 42, ran for the District 6 mayor seat with the support of PNL and the USR-PLUS Alliance and won. He replaces the PSD mayor Gabriel Mutu.

Ciucu was born in Pitesti and, although he is a member of one of the governing National Liberal Party (PNL), he is also seen as part of the new generation of players on the local political stage. He is married and has one child.

He was general councilor of Bucharest from June 2016 until December 2019, when he resigned to become president of the National Agency of Civil Servants (ANFP). While a member of the Bucharest General Council, he was one of the biggest opponents of former general mayor Gabriela Firea.

Ciprian Ciucu taught project management at the University of Bucharest for seven years, was part of the National Integrity Council, and worked in administration projects in Moldova, Kosovo, and Georgia, according to G4media.ro. He also worked as director and public policy expert at the Romanian Center for European Policies.

In 2016, Ciprian Ciucu announced that he wants to run as an independent for the Bucharest City Hall, backed by the M10 party, but he withdrew from the race and joined the PNL, according to Ziare.com.

Ciucu also uses social media to stay in touch with the citizens of District 6 and not only - here.