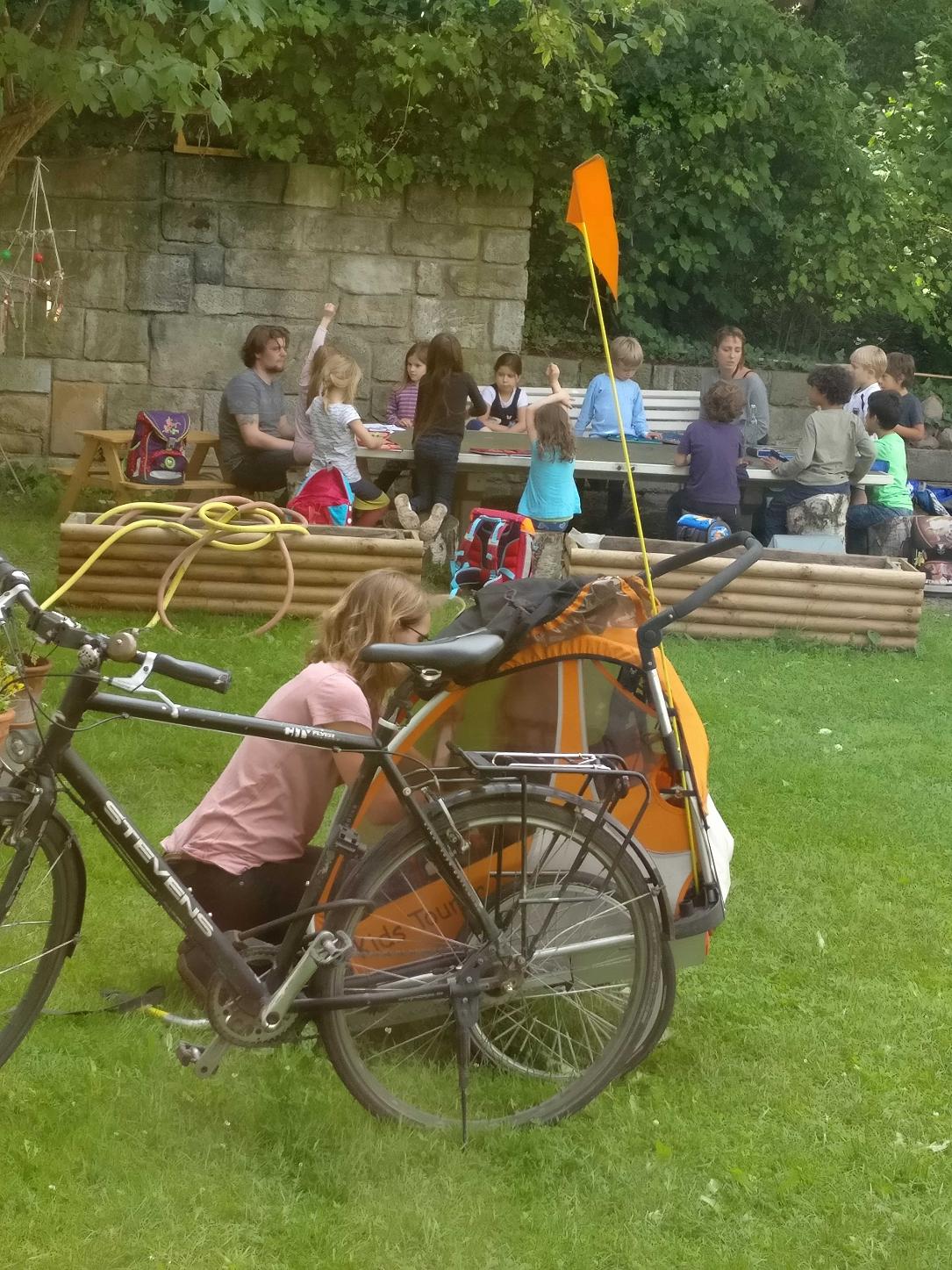 Cycling is a way of life for some, while for others, it is a relaxing and healthy weekend activity. But a bike ride can also be a fun way to discover a city. So, this weekend, we also embark on a two-wheeled adventure through Bucharest.

We are in Romană Square in downtown Bucharest and the day promises to be sunny, but not too warm: a perfect spring day for a bicycle ride. It is Saturday morning, which means that the square is not yet crowded.

Not far from the subway, we find an automated bike-sharing station. We get closer and choose our bikes carefully (for a journey without incidents, it's important to have a bicycle in good condition). After a quick inspection, we unlock the bikes with a mobile app. We downloaded and registered on the app before leaving home, so now we just have to scan the QR code on the bike.

We're now ready for the journey; our destination today: Regele Mihai I (Herăstrău) Park - one of the largest parks in the Capital and one of the main weekend attractions in the north of the city. The first stop: Victoriei Square. We choose to get there by pedaling on Calea Victoriei, as this avenue has a marked bike lane.

The alternative transport infrastructure is still under development in Bucharest, and the short ride to Calea Victoriei requires a little more attention: we pedal slowly on Dacia Boulevard for several hundred meters, paying attention to the cars passing by. However, once we reach the bike lane on Calea Victoriei, the ride becomes relaxing and even fun, especially on the segments where we can pedal a little faster: adrenaline levels start to rise as we enjoy the feeling of freedom offered by this activity.

On Calea Victoriei, we pass by old buildings - some restored, others with deep scars of the past, but also by tourist attractions such as "George Enescu" National Museum (housed by one of the most beautiful buildings in Bucharest - Cantacuzino Palace) and Filipescu-Cesianu House (a former aristocratic residence that is today a museum).

We arrive in Victoriei Square, a hot spot on the tourist map of the Capital, mainly because of Victoria Palace - the imposing building where the Romanian Government works. In this square, we also find the "Grigore Antipa" National Museum of Natural History, as well as the National Museum of the Romanian Peasant and the Museum of Geology. They're all waiting for visitors with novel information and impressive collections. Near the Antipa Museum, the bicycle rack invites for a short stop to visit the museum – you can read about it here.

We continue our bike ride. We pass by Victoria Palace and enter Aviatorilor Boulevard - one of the largest venues in Bucharest. Usually crowded during the week, the boulevard is free today, so we enjoy a relaxing bike ride in the shade of the trees bordering Kiseleff Park. As we pass by, we can hear the cheerful voices of a group of children running on the alleys of the small park. We pass Aviatorilor Monument and pedal further to Charles de Gaulle Square - one of the entry points to Regele Mihai I Park.

We pedal right past the statue of great French politician Charles de Gaulle to enter the park; not far from this entrance, a few young people choose their bicycles from another bike-sharing station.

There is a lively atmosphere in the park, as its wide alleys are full of tourists and Bucharesters of all ages, all enjoying the beautiful spring weather. Children play with a ball on the grass under the close supervision of parents resting on a nearby bench, while a couple jogs on the alley. We’re not the only ones riding bikes – two – wheeled trips are popular in Bucharest’s parks. We continue to pedal, but we stop from place to place to take pictures of tourist attractions that we meet on the way, such as the Modura Fountain or the Sleeping Nymph - a marble statue signed by Romanian sculptor Filip Marin.

We also pass the Summer Theater and reach the lake, where we decide to rest a little. The day is sunny and a few minutes' break on the lake is more than welcome. A few ducks float quietly on the water and some kids try to lure them closer to the shore with pieces of bread. They fail to do so, but their excitement gets out attention and makes us smile.

After a ride around the lake, we decide it's time for lunch. So, before we head back to Romană Square, we stop at a restaurant in the park, where we enjoy a tasty meal and a refreshing lemonade - precisely what we needed to continue our route. Not far from this venue is the "Dimitrie Gusti" National Village Museum – an open-air museum that should be on the list of everyone curious to discover the Romanian village life. You can read more about the Village museum here, and about the park here.

We use the exit from the Arch de Triumph to get out of the park and we stop here for a few moments to take pictures with the monument erected to commemorate Romania's victory in the First World War.

We've changed the return route a bit, so we're now pedaling on Kiseleff Road – a very crowded boulevard on weekdays, bordered by tall trees whose shade provides refuge on hot summer days. On both sides of the boulevard, there are imposing historic buildings hosting embassies or private houses.  We stop for a short break in the small Kiseleff Park before arriving back in Victoriei Square. We pass Victoria Palace once again and turn right on Lascăr Catargiu Boulevard this time, which takes us directly to Romană Square.

We leave our bikes at the same automated station from where we started our long journey today and head to one of the coffee shops in the area. We end the day with a flavored specialty coffee, which we enjoy while browsing the photos taken today.

But the weekend is not over, so Sunday finds us in the center of the Capital once again – this time in Universității Square. For today we have chosen a shorter route, but just as fun.

Similar to the previous day, we find the bike-sharing station very quickly, as this one is also located not far from the subway station, on Regina Elisabeta Boulevard. It's an automated station as well, so we use the same mobile app to unlock the bikes.

We get ready and start the adventure. Today's destination: Izvor Park and the Parliament Palace.

Universității Square is probably the most famous public square in Bucharest. Foreign tourists use map apps on their mobile phones to find their way around, while the Bucharesters wander up and down Regina Elisabeta Boulevard: some go to Cișmigiu Park, others enter the bookstores, and some stop at a terrace for a late lunch. We also start pedaling carefully on Elisabeta Boulevard and not long after we turn left on Calea Victoriei.

While riding our bikes on this segment of Calea Victoriei, we pass by other tourist attractions of the Capital, such as the romantic Macca-Villacrosse Passage and the elegant CEC Bank building. There is a lot of movement on the stairs of the National Museum of History: groups of young people are talking and laughing, while some tourists are heading towards the museum's entrance.

We continue our journey, enjoying the hustle and bustle of the city, which gets our energy levels back up while increasing our adrenaline. Other cyclists pass by: we say hello, smile and pedal further.

Soon we reach the Dâmbovița river, so we turn right on Splaiul Independenței and continue pedaling along the river, carefully, until we reach Izvor subway station; at this point, we cross the bridge over the river and enter Izvor Park. This is a lively place too: teenagers roller skate on the park's alleys, while the children run on the grass or have fun at the playground. Some dogs bark nearby, in the small dog parks.

We pedal slowly down the crowded alleys until we reach the other side of the park, where we sit on the grass. In front of us, the Parliament Palace stands tall, imposing – a reminder of the communist regime that ruled Romania before the 1989 Revolution, changing the country's path forever.

We spend some time in this park, to take pictures, enjoy the sweets sold at the small kiosks in the park and relax on the grass. Around us, other people take pictures too, walk their dogs, jog, or play with the kids. The atmosphere is cheerful and gives us the energy we need to head back to Universității Square.

We follow the same route back, and after we leave our bicycles at the bike-sharing station, we walk to the Old Town - the central point of Bucharest, where we plan to pamper ourselves with a delicious dinner and a refreshing dessert.

In Bucharest, there are bike rental centers close to the large intersections and near the main parks. Some of them are self – service centers, which require payment and an app to rent the bikes, which can then be returned to any similar center in the city. In other places, especially near parks, you will find operators who will provide a bike for an hourly or daily fee.

The parks in Bucharest are closed during this period, due to the coronavirus pandemic (COVID-19). Also, according to the same set of measures taken by the authorities to limit the spread of the new virus, the museums and other tourist destinations, as well as the restaurants and bars are closed in this period. Cycling is only allowed on short distances around the house. 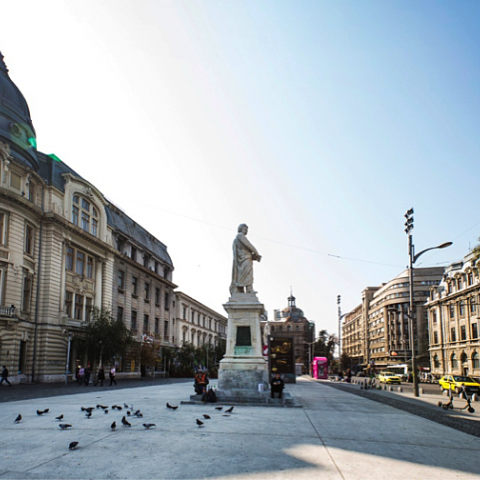 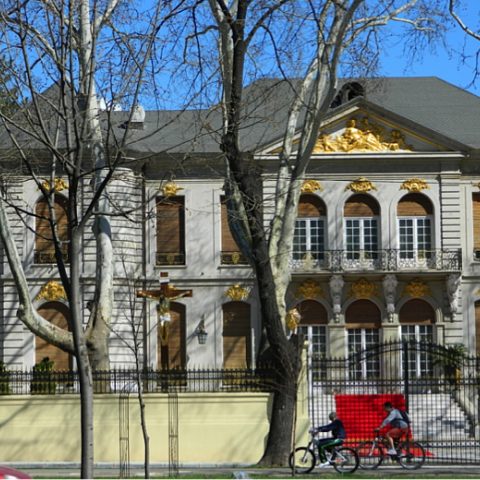 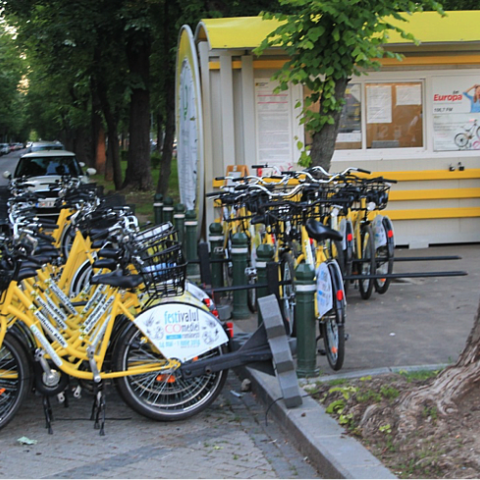 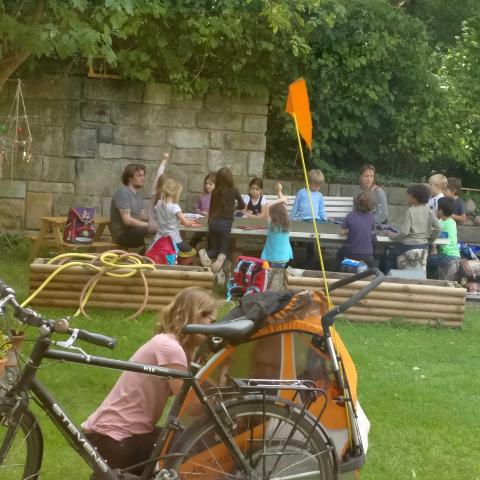 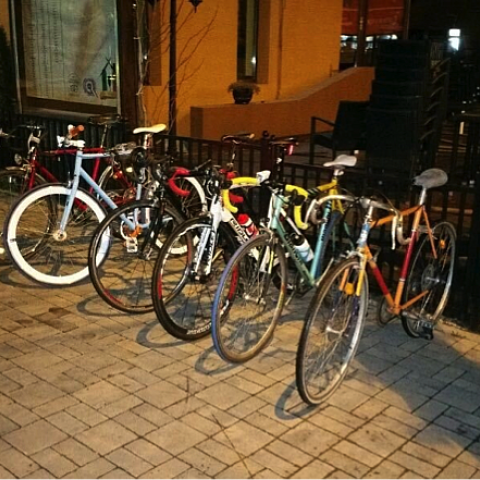 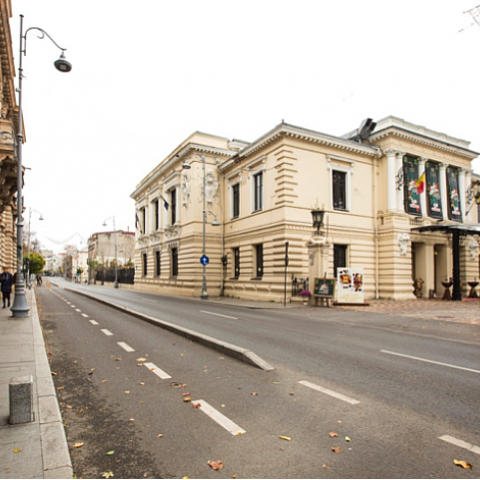