Skip to main content
Politics
Romania’s new Government: Who are the 27 people who will manage the country? 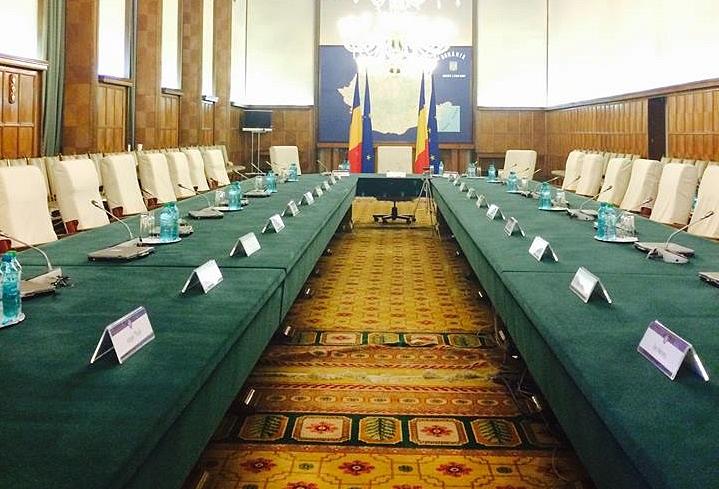 Romania’s new Government led by Sorin Grindeanu will have 27 members, including the Prime Minister and two deputy prime ministers.

The Social Democratic Party (PSD), which won 46% of the votes in the December 11 parliamentary elections, will have 23 members in the new cabinet. Their allies from the Liberal Democratic Alliance (ALDE) will have four seats, including a deputy prime minister.

Most of the nominated ministers are at their first mandates in Romania’s Government, although some of them are politicians with many years of experience behind. A few of them have been members in the PSD cabinet led by Victor Ponta and two were members in Adrian Nastase's cabinet, but all had relatively short mandates.

Sevil Shhaideh, PSD leader Liviu Dragnea’s first Prime Minister proposal, will be one of the most powerful ministers in the new cabinet. She will be deputy prime minister and will coordinate a mammoth-minister made of the former Development Ministry and the former EU Funds Ministry. Shhaideh, a person in which Dragnea has “full confidence” will thus make important decisions about how the Government will allot investment funds to the local authorities and will manage the programs for attracting EU funds, which are an important component in PSD’s governing program.

The new cabinet will also have a minister delegate for EU funds, Mihaela Toader, who will work under Shhaideh’s coordination. Mihaela Toader, has worked as a director within the EU funds ministry.

The Finance Ministry, another key portfolio, will be led by Viorel Stefan, one of PSD’s top economists. He has been the president of the budget and finance committee within the Chamber of Deputies in recent years. He was a senator from 1996 until 2008 and a deputy after that. He recently got another mandate. Before going into politics, Viorel Stefan was a general manager of NAVROM Galati, a top river navigation company in Romania.

The Economy Ministry, which handles Romania’s industrial strategy, will be managed by Alexandru Petrescu, the general manager of the Romanian Post. Petrescu worked for several financial services companies in London before returning to Romania, where was first appointed as strategy and development manager within the Romanian Post, in 2012, and general manager in 2014. He’s also the president of the board of directors of railway passenger carrier CFR Calatori. Both the Romanian Post and CFR Calatori are owned by the state.

The new cabinet will also include a Ministry of Small and Medium Enterprises led by Florin Jianu, who also held a similar position in the Victor Ponta cabinet. Jianu is currently the president of one of biggest SME association in Romania, the CNPIMMR.

There will also be a dedicated Tourism Ministry. Led by Mircea-Titus Dobre, a 38-year old economist from Constanta, this ministry should be in charge of Romania’s tourism strategy. Dobre, who is a member of PSD Constanta, worked for his family’s bakery and pastry business, Dobre & Fiii (Dobre & Sons) before being elected deputy in 2012.

In the cabinet led by Dacian Ciolos, the Economy Ministry included the SMEs and tourism, which are now separate ministries.

Craiova mayor Lia Olguta Vasilescu will also have an important position in the new cabinet, where she will lead the Ministry of Labor and Social Justice. Vasilescu, 42, was reelected mayor of Craiova in June 2015 despite the corruption investigations targeting her. She will have an important role in implementing some of the promises in PSD’s governing program, including the increase in pensions and public employees’ salaries, as well as the increase of the minimum wage in Romania. The Labor Ministry is usually one of the most demanding positions in the Government and requires solid negotiation skills.

The Transport Ministry will be led by Razvan Alexandru Cuc, a 33-year old economist from Giurgiu. He joined PSD in 2014 after previously being enrolled in the People’s Party led by media mogul Dan Diaconescu (PP-DD). He was a state secretary in the Transport Ministry from October 2015 until May 2016. On December 11, he was elected deputy. The Transport Ministry is another demanding portfolio, as it is in charge of Romania’s infrastructure projects, such as highways, railroads, and airports, and it has several troubled companies under its authority, including railway freight carrier CFR Marfa, railway passenger carrier CFR Calatori, and the state airline Tarom.

The Ministry of Agriculture will be led by Petre Daea, a 67-year old agronomist from Mehedinti. He was agriculture minister in Adrian Nastase’s cabinet between July and December 2004. He was senator from 2004 until 2012 and from 2012 on he has been a deputy. The Agriculture Ministry also manages significant amounts of EU funds for local farmers.

The Energy Ministry will be led by Florin-Toma Petcu, a 38-year old hydro construction specialists from Giurgiu. He has managed several navigation and shipbuilding companies in Giurgiu before starting a career in administration, first as a director in the state’s asset management company – AAAS, and then as a president of the Environment Protection Agency, from December 2014 until May 2016. He was recently elected deputy. He’s one of the four ALDE ministers in the Government.

ALDE co-president Daniel Constantin, a former agriculture minister in Victor Ponta’s cabinets, will be the new minister of environment. He will also hold the second deputy prime minister position in the cabinet.

However, this ministry will also be thinner than the one in the Dacian Ciolos cabinet, as the new Government will also have a Ministry of Waters and Forests, which will be in charge of managing Romania’s water and wood resources, including two important companies: the waters management company Apele Romane and the national forest company Romsilva. PSD’s Adriana Petcu will be in charge of this portfolio.

The Communications Ministry will have the youngest minister, 30-year old Augustin Jianu. An engineer in automatics and applied informatics, Jianu has been a general manager of CERT-RO, a public institution in charge of researching computer security incidents and developing cyber security solutions. The Communications Ministry sets the regulation for the telecom sector and the booming Romanian IT sector. It also coordinates the Romanian Post and holds a significant stake in telecom operator Telekom Romania.

The Interior Ministry, which coordinates the domestic security forces, including the Police, will be managed by a woman, Carmen Daniela Dan, a former subordinate of PSD leader Liviu Dragnea at the Teleorman County Council. She was the prefect of Teleorman county from March 2014 until October 2016. In December, she was elected senator.

56-year old mechanical engineer Florin Iordache, who has been a deputy since 2000, is proposed to take over the Justice Ministry. He was one of the MPs who supported a project to modify several important laws impacting the justice system, in 2013, according to local Hotnews.ro.

Florian Bodog, a surgeon and dean of the Medicine and Pharmacy Faculty within the Oradea University, will be the new health minister.

The Education Ministry will be led by Pavel Nastase, a former record of Bucharest’s Academy of Economic Studies (ASE).

Ionut Vulpescu, an adviser to former Romanian President Ion Iliescu, will lead the Culture and National Identity Ministry. The 40-year old theologian was a culture minister in the Victor Ponta cabinet as well, from December 2014 until November 2015.

Serban Constantin Valeca, 60, is the proposed minister of research and innovation in the Grindeanu cabinet. A professor at the Pitesti University he’s also the president of PSD Arges. He was a minister delegate for research in the Nastase cabinet, in 2000, and recently got his third senator mandate.

Marius-Alexandru Dunca, 36, will be the new minister of youth and sports. He was vice president and then president of the National Authority for Consumer Protection, from May 2012 until November 2015.

Ana Birchall, 43, will be the new minister delegate for European Affairs. She has a PhD from Yale Law School in the U.S.

Andreea Pastarnac, Romania’s ambassador to Israel, will be the new minister for Romanians abroad.