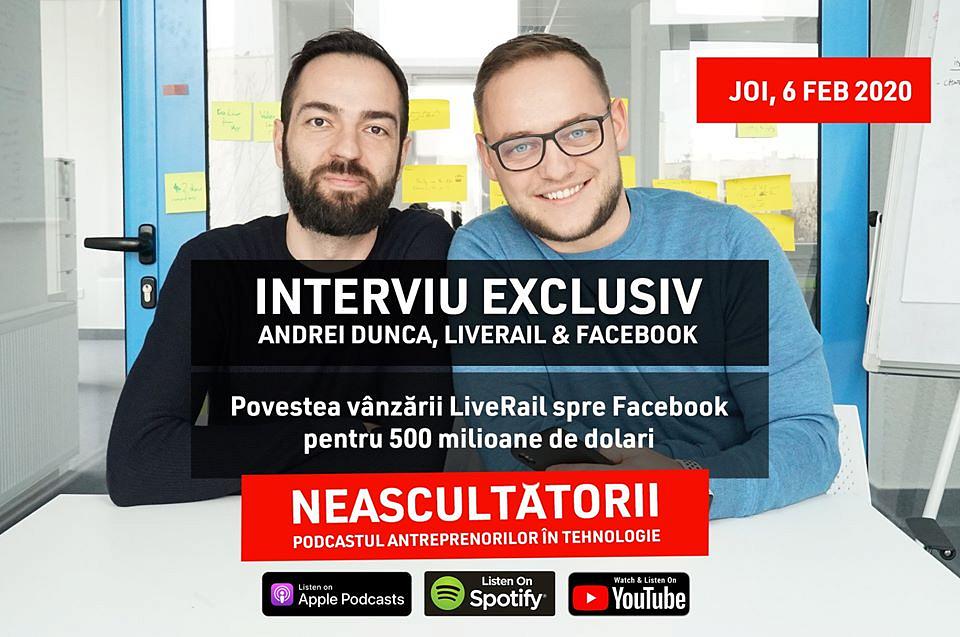 Romanian entrepreneur Andrei Dunca shared for the first time the story behind the sale of LiveRail, one of the most valuable projects ever developed in Romania, to Facebook. In a podcast interview with his long-time business partner Sergiu Biris, Dunca spoke about the months of negotiations and doubts and about what happened after the USD 500 million deal.

LiveRail was a software company that developed technologies for online video advertising aimed at helping content producers monetize their inventory better. The company was founded in 2007 by British investor Mark Trefgarne and Romanians Andrei Dunca and Sergiu Biris and most of its technology was developed by a team of programmers based in Cluj-Napoca, coordinated by CTO Andrei Dunca. In 2014, Facebook bought the company in a deal estimated at USD 500 million. Two years later, Facebook gave up on the Liverail project and integrated part of the technology into other Facebook services. Why did this happen?

“Any such acquisition has a sponsor or an internal team that sponsors the idea, meaning they go to the leadership internally and say we want to buy this company because it helps us with that strategy. We also had a sponsor, a director who was very committed to making the acquisition happen. The mission was to build a direct competitor for Google DoubleClick for video and mobile,” Andrei Dunca recalls.

Everything was OK during the negotiations and due diligence phase and everyone was on the same page. Some 3-6 months after the transaction, the “sponsor” moved internally to another team, moved from Menlo Park to London to work on another Facebook product. The new managers that replaced him came and questioned the strategy: “What are we doing here? What is it about? Is this really the right strategy, is it not too complicated? Let's do something else.”

“So, we lost our ‘internal champion’ and none of us had any experience with these corporate politics. We didn't know how to navigate issues like this, we were just nervous and frustrated and it was very hard to get over the idea that LiveRail was no longer our child,” Dunca says.

LiveRail’s management started the negotiations with Facebook in the autumn of 2013. Initially, they were trying to find a way to cooperate, given that Facebook had no video advertising service of its own. “After that, we heard nothing from them for several months and thought that things were dead. Then, in January 2014, they came back and told us they were looking to make an acquisition and they were talking to 40 companies, and we were one of them,” Dunca recalls.

The focus was on technology and Facebook concluded that LiveRail had the best technology for what it needed. “We then went through a very deep and detailed due diligence. At one point, all of LiveRail’s management spent one week at the Facebook headquarters. Our employees were puzzled and we had to come up with some excuses because we couldn’t tell them what was really going on,” the entrepreneur says.

At the Facebook headquarters, they had to enter through a back door and under a different name to keep the process a secret.

The due diligence was focused on the technology and the source code. Dunca had to answer all the questions raised by Facebook technicians such as “what does this function do?”. At the end of this process, the Facebook team was satisfied after which the financial negotiation started, which was much more difficult, according to the Romanian entrepreneur.

“There’s a short scene in Family Guy in which peter negotiates with someone and Peter says <<We want everything!>>, to which the answer is <<We give you nothing>>, and he says <<I want something>>, <<OK, we have a deal>>. In our case, the negotiations went kind of like that. We went with our formulas and our calculations and said we wanted a billion and a hundred million dollars and they came with their formulas and justifications and offered us 78 million dollars,” Dunca says.

In 2014, when the transaction took place, LiveRail had revenues of USD 250 million and was profitable, according to Dunca. However, the negotiations phase took weeks and more than once the LiveRail founders expected the deal to fail.

Although the two parties agreed on the USD 500 million price, LiveRail’s shareholders didn’t immediately get the money. Moreover, Facebook’s decision to close the project raised questions about the money being paid, according to Andrei Dunca.

“The money part is not that optimistic either, in the sense that they did not pay all the money at once, no one pays all the money at once. A lot of the total value was divided on a vesting schedule of 3 years or 4 years, depending on how long we would stay in the company. About 20% of the total amount was held in escrow, in case of fraud and other legal issues, for 18 months, so a year and a half a lot of money is in escrow. And we began to wonder: if there’s no more LiveRail and we are not working on LiveRail anymore, do we still get that money or not?”

Dunca didn’t mention in the interview if he got all the money he was supposed to get for his share in LiveRail or not. However, he said he left Facebook after three years and nine months, during which he worked at the company’s headquarters in Menlo Park and coordinated a remote team in London, as he wasn’t really happy with life in the corporation.

Startup versus corporation (entrepreneur vs. manager)

Andrei Dunca, who has worked on developing several startups, says there are some advantages to working in a big corporation like Facebook, mainly in terms of resources. “You don’t have to think about bills, payrolls, recruiting, which is all you think about as an entrepreneur. You can focus 100% on the product,” Dunca says.

However, the disadvantage, in his case, was that he found himself in a middle management position in which he depended on forces he couldn’t control, such as strategic decisions taken at top management level.

Andrei Dunca has settled in San Francisco and recently became a U.S. citizen. He is currently an investor and advisor in several startups.

The full podcast interview (in Romanian) is available here.