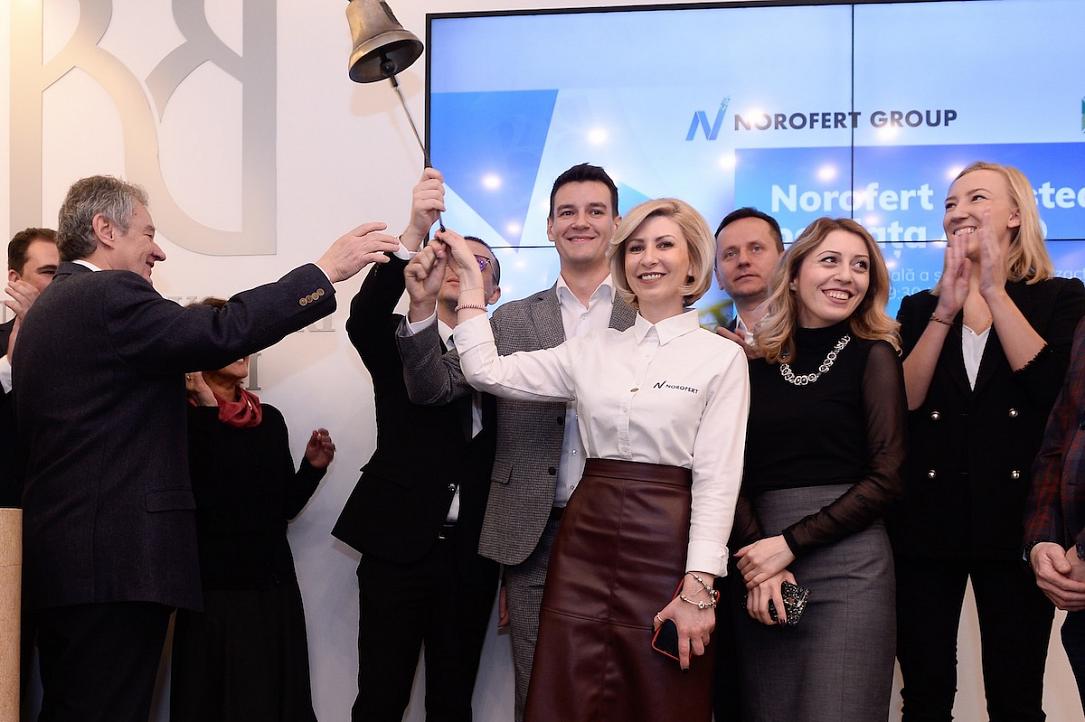 Three companies listed their shares on the Bucharest Stock Exchange’s AeRO market since the beginning of this year after raising money through private placements last fall. The investors who participated in those private placements made some hefty profits, while the investors who bought shares on the first trading day also obtained double-digit returns in under two months.

Thus, ringing the bell for the listing on the Bucharest Stock Exchange or AeRO is not a happy moment just for the company owners, who have the value of their businesses confirmed by the market, but also for the investors, who get the opportunity to make significant profits with these companies.

Romania-Insider.com has analyzed the evolution of the last seven companies that listed their shares on the AeRO market in the last two years. Here are the main findings:

1.Investors who bought shares in private placements more than doubled their money on the first day of trading on AeRO.

The investors who bought shares in the private placements carried out by these companies could mark an average profit of 173% on the first day these shares were traded on the AeRO market. The returns ranged from 20% for Norofert to 425% for Safetech Innovations.

The returns are visibly higher for the three companies listed this year (MAM, SAFE, and AG), which multiplied their investors’ money by an average of 271% on the first day of trading. Meanwhile, NRF and HAI listed their shares in 2020, when the general market context was less favorable, which explains their lower returns on listing day.

2. Investors who bought in the private placements and kept the shares in their portfolios up until now have multiplied their money four times.

The investors who participated in the private placements carried out by the five companies and kept the shares in their portfolios to date (March 10, 2021) multiplied their money fourfold (on average). The returns vary from 67% for HAI to 950% for NRF. For the three companies listed this year, the investors’ average return to date is over 430% in less than six months.

The returns from private placements have been massive, but only a relatively low number of investors had access to them, as conditions for participating in such offers are somewhat restrictive. Still, the investors who had to wait until these companies listed their shares on the AeRO market to buy their shares were also rewarded with double-digit returns.

Seven companies listed their shares on the AeRO market in the last two years. Besides the five mentioned above, smartphone producer iHunt (HUNT) and affiliated marketing platform 2Performant Network (2P) carried out technical listings without raising money through private placements. The investors who bought shares in these seven companies on the first trading day have recorded an average return of 225% up to date.

In most cases, these returns didn’t come immediately. The average return offered by these companies in the first month after listing is 12%. Some traded at the same level for an extended period after listing as the sale pressure from existing shareholders and those who had bought shares in the private placements before listing prevented the prices from going up too quickly. However, once this sale pressure disappeared, some of these companies recorded impressive evolutions.

For example, investors who bought Norofert (NRF) shares on the day of its listing (March 3, 2020) multiplied their money more than eight times in just one year. The NRF share price is now RON 26.2, compared to a closing price of RON 12 on listing day. However, the company has also carried out a capital increase in July 2020, giving its shareholders three new shares (free of charge) for each share they previously held. Thus, an investor who bought one share worth RON 12 on listing day now has four shares worth RON 104.8 (on March 10, 2021).

The shares of smartphone producer iHunt also recorded a massive increase of 645% since its listing in July 2019. For the three companies listed this year, the average return compared to the first day of trading on AeRO is 38%. The return ranges from 10% for Agroland (AG), which listed its shares on March 1, and 74% for Safetech (SAFE), which listed its shares at the end of January.

What’s the explanation for these high returns?

Several factors have contributed to these high returns offered by new companies listed on AeRO. One is that some of these companies are relatively young and have high growth rates.

Simultaneously, the low number of such listings in previous years has made it difficult for company owners and brokers to correctly guess the right valuations. Thus, some of the private placements carried out in 2020 were rather undervalued, allowing investors who participated in them to get massive returns. This could change as the number of such private placements increases, and the company owners and brokers have better references.

The favorable context that has pushed the Bucharest Stock Exchange indices to new highs in the last two months has also helped the companies on AeRO, which recorded among the highest returns this year.

How to benefit from these opportunities?

The number of listings is likely to increase in the following period, as more companies will be encouraged to look for financing on the Bucharest Stock Exchange (BVB) and AeRO. However, it’s likely that the next private placements will also be better valued so that the future returns from such listings may not match the past results. Still, there will still be plenty of opportunities for profit from such investments as long as the general market trend remains positive or stable.

The next listing on AeRO will likely be that of videogame producer FireByte Games, which carried out a private placement at the end of February.

As for private placements, local dairy producer Bonas, which operates mainly in Cluj-Napoca, is looking to get RON 2 mln from such an operation. Agroland (AG) is also looking to carry out a private placement for its agribusiness division, which it also wants to list on AeRO.