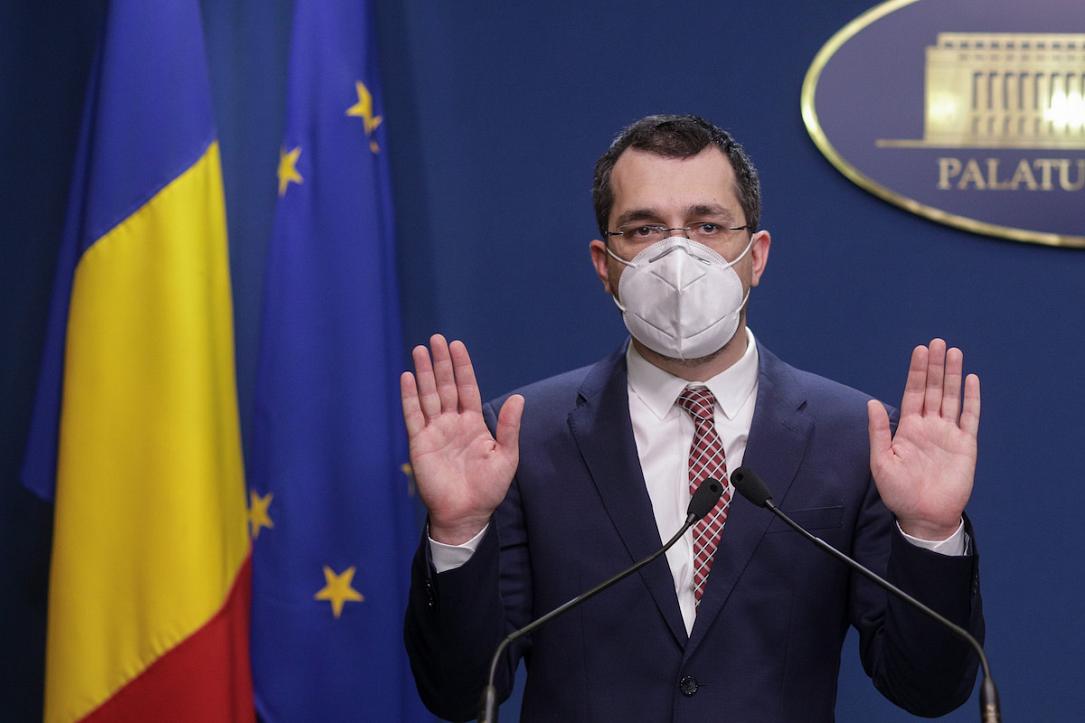 Vlad Voiculescu, one of the stars of the reformist alliance USR-PLUS, lasted less than four months in his second term as Romania’s health minister. Liberal prime minister Florin Citu decided to dismiss him on April 14, sparking the first big scandal in the ruling coalition.

Vlad Voiculescu thus becomes the first minister removed from Citu’s cabinet, but this does not come as a surprise. In just three months, Voiculescu has clashed with Liberal mayors and ministers and with the prime minister himself and has been under fire by the opposition and the local media for failing to manage the COVID-19 crisis when, in fact, he had little power to do it.

The prime minister’s decision to dismiss the health minister comes after an order related to COVID-19 quarantine measures. However, Voiculescu’s party colleagues claim that the decision may have been motivated by the reforms he initiated, which included changing the managers of the county health insurance houses, who manage significant chunks of the health budget in Romania, with new ones appointed following public competitions.

A bit of context

Vlad Voiculescu’s dismissal by PM Florin Citu comes after three months in which the Romanian authorities have been struggling to manage the third wave of the COVID-19 pandemic and put the vaccination campaign on track. During this period, the pandemic response has been inconsistent with many controversial decisions and communication errors.

For example, the prime minister recently announced that Romanians would start to return to their normal life this summer and that they would be able to go on holiday at the seaside on May 1-Easter. At the same time, the number of critical COVID-19 patients treated in intensive care units (ICUs) has climbed to new highs and the authorities enforced new restrictions in big cities with high COVID-19 infection rates, such as earlier curfew and shorter opening hours for supermarkets.

These inconsistencies, the opposition’s harsh criticism of the Government’s measures, and the recent street protests organized by anti-mask and anti-vaccine advocates against the new restrictions have fueled the perception that the Government is doing a poor job in managing the pandemic.

The scandals reached a new level last week when the patients treated in a hospital in Bucharest were evacuated overnight to make room for COVID-19 patients and three patients died after the failure of a mobile ATI unit. All these events have led to a serious image crisis for the Government of PM Citu on the pandemic front. Thus, the prime minister needed to make a move to defuse the situation for now. He chose to sacrifice the health minister and thus appease his party colleagues who had been asking for Voiculescu’s head in recent months. Citu needs his party’s support as he may take on Liberal leader Ludovic Orban at the party’s congress later this year.

“The health minister is responsible for each patient in Romania!”

This is what prime minister Florin Citu wrote on Facebook the next day after the controversial evacuation of the Foisor Orthopedics Hospital in Bucharest, which was turned overnight into a hospital for COVID-19 patients. “Let’s see if there is any honor left,” the PM added, hinting that the health minister’s resignation would be appropriate. Citu also said recently that the health minister was responsible for freeing up more ICU beds for COVID-19 patients.

While indeed it may seem that the health minister should be the top official most suited to manage the health crisis, in reality, the situation in Romania is more complicated than that.

The person with the highest decision power in managing the pandemic is not the health minister but the head of the Emergency Situations Department Raed Arafat, who is also a secretary of state in the Interior Ministry. In fact, Arafat ordered the evacuation of the Foisor Hospital on Friday evening, not Voiculescu.

Secondly, the health minister doesn’t have power over all the hospitals in Romania. In fact, most of the hospitals are under the local administration’s authority. Again, this is the case with the Foisor hospital, which is under the Bucharest City Hall’s authority. Thus, the hospital’s manager doesn’t take orders from the health minister but from the mayor – in this case, Bucharest mayor Nicusor Dan. While the Health Ministry has been trying to convince more local hospitals to make room for COVID-19 patients, the managers and local authorities have constantly refused this. As a result, the number of ATI places for COVID-19 patients hasn’t increased.

In the particular case of the Foisor Hospital, the manager had been refusing for weeks to allow his hospital to be transformed into a COVID-19 hospital. In the end, Raed Arafat issued an order to transform the hospital into a COVID-19 unit, but the manager continued to refuse. Thus, Arafat called the prime minister, who called Bucharest mayor Nicusor Dan, who passed on the decision forward to the local hospital administration. However, the PM said that it wasn’t his responsibility to make the call (to Nicusor Dan) and criticized the health minister for this situation. Vlad Voiculescu, who also vied for the Bucharest mayor seat and was elected deputy mayor last year just before getting the health minister seat, is not on good terms with Nicusor Dan, according to the local media. Ironically, as deputy mayor, one of the areas he would have managed was the city’s hospitals.

The health minister was also pointed as one of the people responsible after three patients lost their lives due to a malfunction at the oxygen installation of a mobile ICU unit in Bucharest. However, that ICU unit had been purchased by the SMURD, under Arafat’s authority.

While not actually managing the pandemic, the health minister ended up paying for all the bad decisions and the accidents related to it.

The situation escalated at the beginning of March when the health minister made a gesture that caught his colleagues in the ruling coalition by surprise: he released a list of all the vaccination centers in Romania and how many people had been vaccinated in each of them. The list revealed that, besides the official vaccination centers where people could schedule for vaccination using the public platform launched by the authorities, there were even more vaccination centers with closed-circuit dedicated to military and secret service personnel. This sparked a big media scandal and justified social outrage.

However, the health minister’s transparency act further strained his relationship with his coalition partners, and especially with prime minister Florin Citu, who was seen as responsible for allowing this parallel vaccination network to operate. In response, Citu ordered an internal investigation on the disclosure of sensitive state security data and recently notified the prosecutors about potential illegalities.

First major conflict in the coalition

Getting back to today, the prime minister had plenty of arguments to ask for Voiculescu’s dismissal. The Health Ministry’s recent order that sets new guidelines for quarantining cities in Romania is important enough that the minister should have consulted in advance with the prime minister and other ministers. The fact that Voiculescu didn’t do that can be interpreted as an act of defiance or a major communication error.

However, Citu made his decision without consulting the coalition, which angered the USR-PLUS alliance. Voiculescu is a top member of PLUS, the party of former prime minister Dacian Ciolos. The alliance’s radical members immediately stated that the prime minister’s decision was unjustified and suggested that it was determined by Voiculescu’s reforms in the health system, which upset many Liberals. Some USR-PLUS members even suggested that the alliance could leave the ruling coalition while others said it would remain in the coalition but only if Citu steps down as prime minister.

Realistically, however, it’s unlikely that USR-PLUS will leave the ruling coalition – the political price would be too high - or that Citu will step down as prime minister after he has just shown his party and his coalition partners that he is the head of his cabinet.