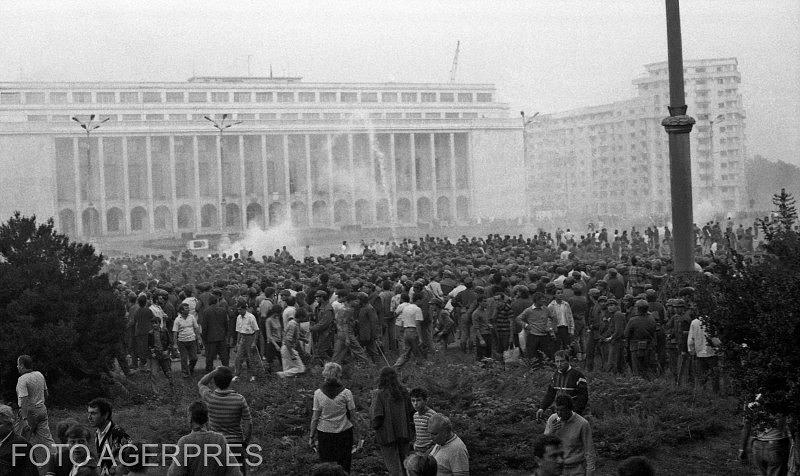 This year, Romania will celebrate 30 years since the 1989 Revolution, which marked the fall of the Communist regime led by dictator Nicolae Ceausescu, and the country's turn to democracy. This article series by Romania-Insider.com is a year-by-year look into the major events that have shaped today's Romania.

In 1991, Romania’s first post-revolution Constitution was adopted, following a high-turnout referendum. Social unrest did not subside and a new miner’s riot resulted in the fall of the Petre Roman Government, all against the background of a tough economy.

If in 1990 the opposition parties and their leaders were among the targets of the miners who came to Bucharest, this changed in 1991. This time, the miners directed their discontent at the ruling National Salvation Front (FSN) and the government of Petre Roman. Some believe that the events in September 1991 were orchestrated by people close to Iliescu to remove the Roman cabinet.

On September 24, the miners in Valea Jiului started a strike and requested that prime minister Roman come from Bucharest to listen to their demands. As this did not happen, 10,000 miners headed for Bucharest, where they went to Victoria Palace, the Government’s HQ, attempting to talk to Roman. Violence followed as the miners attacked the security forces and set the ground floor on fire.

Then they marched through Bucharest going to the Parliament. An emblematic photo of that year shows Ion Rațiu, a leader of the National Peasants' Party - Christian and Democrat (PNTCD), surrounded by miners at the tribune of the Parliament, attempting to calm down the spirits. The miners had entered the assembly room of the Chamber of Deputies and were requesting the resignation of president Ion Iliescu and that all of their demands were met.

The miners them went to the Cotroceni Palace, where president Ion Iliescu met their leader Miron Cozma and accepted the miners' demands, including the resignation of Petre Roman. The former PM later stated that this was a coup and that he didn't announce his resignation but was rather forced to accept it.

Almost 500 people were hurt during the time miners spent in the capital, and three died – two bystanders and one gendarme - as fires were shot by the security forces. The miners' leader Miron Cozma was sentenced to 18 years in prison, in February 1999, for his role in the events. President Iliescu pardoned him in December 2004, a few days before the end of his last mandate.

A second cabinet takes over

After Petre Roman's resignation, a technocrat government headed by Theodor Stolojan was appointed. The new cabinet was in place from mid-October 1991 to November 1992. It took over with the mission to continue the reforms started by the previous Government and to prepare the 1992 elections.

An economist and former finance minister in the second cabinet led by Petre Roman, Stolojan worked at the World Bank after his mandate as prime minister ended. He was also a presidential candidate in 2000, on behalf of the National Liberal Party (PNL), coming out third in the first round of the elections.

Stolojan took over the Government in a difficult moment for Romania. The miners' uprising scared off foreign investors who didn't want to come to Romania. Moreover, representatives of the World Bank, who were in Bucharest those days, got beaten by miners, Stolojan recalls. "The IMF and World Bank pulled out of Romania and we found ourselves in the autumn of 1991 with no foreign exchange reserves, no credit lines, and nobody wanting to credit Romania," the former PM said in an interview with Evenimentul Zilei.

Thus, to recapitalize local banks, in November, he decided to "nationalize the foreign currency", forcing all companies that held foreign currency to sell it to the state at a fixed rate of 180 old lei (ROL) for 1 USD. The price of raw materials and imports was aligned at this level. The Government was trying with this measure to gather the funding needed to buy the energy needed for the winter period.

A new Constitution is adopted

The need for a new Constitution emerged quickly after the December 1989 events. On June 11, 1990, a commission made up 23 members of the Parliament and five professors, led by law professor Antonie Iorgovan, was appointed to work on the project of the new Constitution.

Iorgovan, sometimes referred to as “the father of the Constitution” was the only MP elected outside of any party list in the Romanian Parliament after 1990. He became an independent senator representing Caraș-Severin in May, 1990, and was part of the parliamentary group of the National Liberal Party.

The new Constitution was inspired from the French one of 1958. Its drafting, the debate on it and the adoption took almost one year and a half. Some of the hot topics of debate prior to the adoption of the Constitution covered the rights of the national minorities, the form of government, the fact that property was not guaranteed but “protected” in the fundamental law, the right to land ownership granted exclusively to Romanian citizens, and the separations of powers.

The Constitution was adopted in the Constituent Assembly on November 21, 1991 and came into force after it was approved, following a referendum on December 8. Over 77% of the almost 11 million Romanians who cast their ballot approved the new Constitution.

The document established that Romania is a national, sovereign and independent state and that the form of government is the republic. It guaranteed the rights and freedoms of citizens and political pluralism. It also established the principle of the separation of powers: legislative, executive and judicial, and a two-chamber parliament. It also stated the principle of autonomy and decentralization in the public administration. The document guaranteed the right to vote, the right to be elected, the right to free movement in the country and abroad, the right to associate and meet, and, last but not least, it abolished the death penalty.

After it went into force, its revision was discussed on several occasions. It finally happened in 2003, when more than half of the document’s articles underwent changes. In 1995, the Day of the Romanian Constitution was established for December 8.

In search of a place in Europe

The string of miners’ riots, the ethnic confrontations of Târgu Mureș, and aggression aimed at members of the opposition parties had chipped away at the international sympathy the country had gained following the 1989 Revolution. Romania made the first steps towards reclaiming its part in Europe in February 1991, when it received the statue of special guest of the parliamentary assembly of the Council of Europe. By December of the same year, the country submitted the official request to join the European Council.

In April 1991, French president François Mitterrand made an official visit to Romania. It was the first visit of a head of state of a Western country after the fall of communism and the first of a French president since 1979, when Valery Giscard d’ Estaing came to Romania. A year before, prime minister Petre Roman had visited France and the talks about the economic collaboration between the two countries started. With Mitterrand, the first French companies also came, laying the ground for what was to become one of the most significant foreign investors’ presence in Romania.

Mitterrand’s visit was also another opportunity for the opposition to show its discontent with president Ion Iliescu as hundreds of protesters gathered around the building of France’s Embassy to chant :”Jos Iliescu! (Down with Iliescu!)”, "Jos socialismul (Down with socialism)!”.

n August 1991, Romania was the first country to recognize the independence of the Republic of Moldova, thus giving up on the idea of the union of the two territories. A year before, the two countries had organized a “bridge of flowers” over the Prut river on May 6. On that day, for a few hours, Romanian residents were allowed to cross the river into Soviet Moldova without a passport or a visa. Another “bridge of flowers” was organized in June 1991, this time allowing Moldova citizens to cross into Romania without paperwork. Similar events took place in 2015 and 2017.