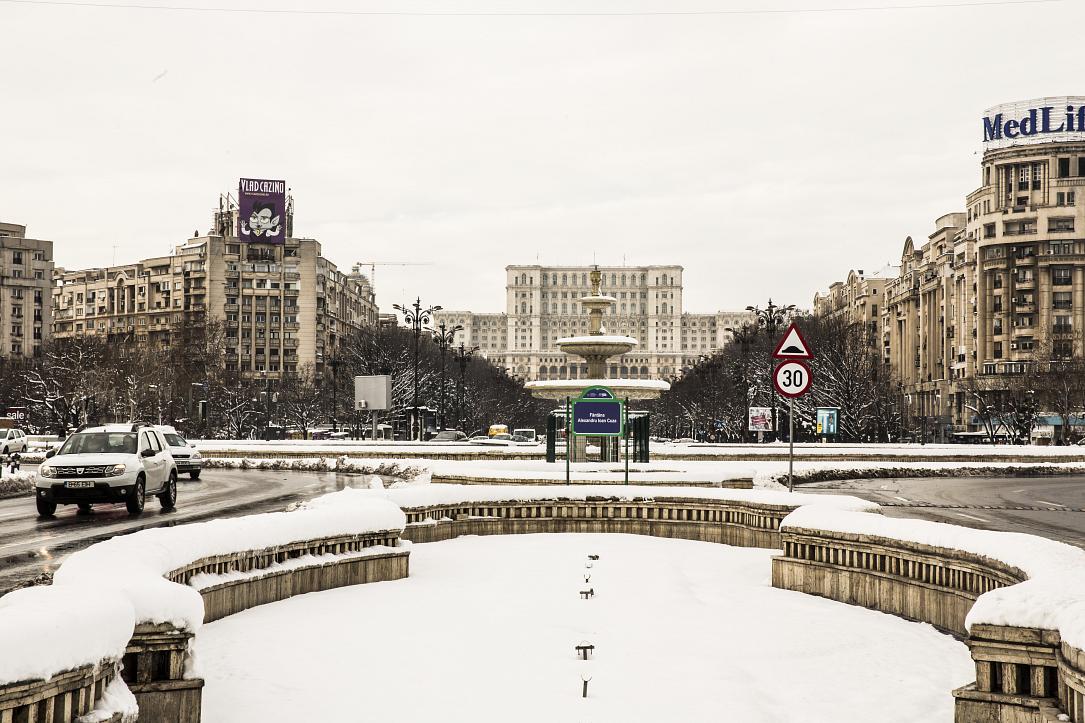 Bucharest’s travel offer is varied and complex, including a large number of landmarks and tourist attractions. And the city squares and plazas are points of connection between all these attractions, perfect spots for holiday photos and relaxing breaks. Plus, the squares are places full of history, each of them hosting tourist attractions you mustn’t miss during your trip to the Romanian capital.

As soon as we leave the subway station we are greeted by the buzz of Victoriei Square, specific to a working day. The sun is still hidden behind the heavy February clouds. However, Victoriei Square is busy as always. Most people rush to work, but there are also some tourists who, like us, stop to take pictures of Victoria Palace - the headquarters of the Romanian Government.

The Victoria Palace, whose architecture is signed by Romanian Duiliu Marcu, is one of the most important buildings in Romania - the Government, the public authority of the executive power, works here. Important decisions are taken in this building whose construction lasted for seven years (1937-1944). The work didn’t end, however, in 1944, as the bombing of that year seriously affected the building. Therefore, the works were resumed and completed in 1952.

Initially, the building’s main facade was covered with Carrara marble tiles, with carved decorative panels on the side, of the same material. Following the bombing of 1944, the facade of the palace was restored using travertine tiles, while the two panels were removed.

Victoriei Square is located in the north part of the Capital, at the intersection of Bucharest’s most important boulevards, including the famous Calea Victoriei. Central point on the tourist map of Bucharest, this square hosts many of the city's top museums, including the “Grigore Antipa” National Museum of Natural History, the Romanian Peasant Museum and the Geology Museum. They all await visitors with surprising information and impressive collections.

We head to Romană Square, where the big boulevards Lascăr Catargiu and Magheru intersect. The temperatures are friendlier now, so we decide to walk the 1-km distance to this square. And Calea Victoriei, a wide boulevard with bike lane and buildings with eclectic architecture, seems the most interesting route.

Walking on Calea Victoriei we pass by the Filipescu-Cesianu House - one of the few aristocratic residences of the Capital’s Belle Epoque period that has remained almost unchanged, the Cantacuzino Palace - which houses the “George Enescu” National Museum and the Grădișteanu-Ghica House - a true architectural jewel. We enter the Dacia Boulevard and soon arrive in Romană Square.

We immediately spot, on the other side of the square, the main attraction of this place - the Palace of the Commercial Academy, a symbol of the city, which houses the Academy of Economic Studies (ASE). In fact, most locals simply call it the ASE Palace, the building being today a meeting point for Bucharesters.

The palace was built in three stages and was consolidated and modernized several times over the years. Its first building, located in Romană Square and on Căderea Bastiliei street, was put into use in 1926. Nine years later, in 1935, Building 2 was inaugurated, followed a few years later by Building 3, which today houses the university's reading rooms.

Romană Square is one of the most important commercial areas in the center of Bucharest, offering a diverse range of services, including restaurants and cafes. So, after walking around the square for a few more minutes, we decide it's time for a short break. Amzei Square is nearby and in the area we find a quiet coffee shop where we get the energy we need while browsing through the photos we have taken so far.

We return to Romană Square and decide to go underground and take the subway to the next stop: Universității Square. The two locations are close, but the Romană Square subway stop is unique in the underground network of Bucharest, so we can't miss it. The station was not included in the initial plan, being built later as an intermediate stop between Universității Square and Victoriei Square. Therefore, the Romană Square station is asymmetrical and narrow, without a wide platform as the other stations.

We arrive in Universității Square in just a few minutes. Right in the middle of the square, looking towards the University Palace, we find four statues dedicated to great Romanian personalities: writer and politician Ion Heliade-Rădulescu, ruler Mihai Viteazul, Gheorghe Lazăr – important figure of the Romanian education system and Spiru Haret - mathematician and politician. A group of foreign tourists stopped here for a few minutes. Some of them take pictures while the guide tells them, in English, interesting things about the history of the place.

The University Palace, headquarters of the prestigious University of Bucharest, was built in neoclassical style based on the plans of architect Alexandru Orăscu. Its construction was completed in December 1869, but the building was expanded years later. The side buildings of the palace were erected between 1912-1926, according to the plans of architect Nicolae Ghica-Budești. The four muses that adorn the building’s facade, signed by Emil Wilhelm Becker, were added in 1929.

The Oscar Maugsch Palace, one of the most representative buildings of the area, also attracts our attention. Built in 1906 based on the projects of architect Oscar Maugsch, the palace initially housed one of the first insurance companies in Romania - Societatea de Asigurări Generala, which was abolished in 1948.

Also in Universității Square we find the Suțu Palace - the headquarters of the Bucharest Museum. The building, made by architects Conrad Schwink and Johann Veit between 1833 and 1835, is one of the oldest aristocratic residences in Bucharest. The interior is equally spectacular, being designed in 1862 by the renowned sculptor Karl Storck.

We stop for a few minutes in the small Colțea Park, where we take pictures of the Broken Violin monument, and then we cross the street towards the "I. L. Caragiale" National Theater of Bucharest. We go, of course, to the ensemble of sculptures installed in front of the theater, which represent popular characters from the works of the famous Romanian playwright Ion Luca Caragiale. Groups of people are resting on the benches nearby while others are heading to the theater. Next to us, two young people are also trying to capture the best pictures of the bizarre sculptures.

Across the square, small monuments such as the KM 0 marker and crosses commemorating the country’s heroes remind us of the 1989 Revolution, which put an end to the communist regime in Romania and which took place in this square too. Across the street from the National Theater is the 21 Decembrie 1989 Square – bearing its name after the date of the Romanian Revolution. It’s easy to find it, as it is also a meeting point for many Bucharesters: a fountain stands right in the middle, with benches installed around it. The fountain is off today so a few pigeons are walking quietly on its edge, picking bits of bread or seeds.

We continue our route on foot, heading towards Revoluției Square, the place where the anti-communist Revolution started in Bucharest. On December 21, 1989, the former communist leader Nicolae Ceaușescu gave his last speech from the balcony of the Central Committee of the Communist Party’s headquarters (today the Palace of the Ministry of Interior) in Palatului Square (today Revoluției Square). Ceaușescu tried to regain control with his speech, but the crowd revolted. The following day, the Ceaușescus fled from the roof of the same building, in a helicopter.

Near the Palace of the Ministry of Interior we notice the Memorial of Rebirth - a monument erected in the memory of the 1989 Revolution victims. The work, signed by sculptor Alexandru Ghilduş, has a height of 25 meters. Its form has triggered many controversies over time, bringing it nicknames such as “The spike in Revoluției Square” or “The potato on a stick.”

We pass by a few electric scooters parked on the sidewalk and stop to photograph other buildings and emblematic monuments of Revoluției Square: the Carol I Royal Foundation Palace (housing today the Central University Library) and the equestrian statue of King Carol I, but also the famous Royal Palace, one of the most imposing buildings in Bucharest, which today houses the National Art Museum of Romania.

After a few steps we reach the George Enescu Square. We spot the building of the Romanian Athenaeum right away, with its special architecture that combines the neoclassical and eclectic styles. And the small park in front of the building makes it all look even more elegant. The building was erected between 1886 and 1888, following the plans of French architect Albert Galleron. Today, the Romanian Athenaeum is an important concert hall, headquarters of the "George Enescu" Philharmonic.

We continue our walk on Calea Victoriei and leave behind the monument dedicated to the great politician Iuliu Maniu, installed across the street from the Krețulescu Church and the monument dedicated to Corneliu Coposu. After less than 10 minutes we spot the Odeon Theater on the left, one of the most representative theaters in Bucharest, housed in a beautiful historic building. We make a short stop here, for some pictures in the small square in front of the theater.

After only a few meters, just before the intersection with Regina Elisabeta Boulevard, we find the Palace of the National Military Circle, built between 1911-1916 at the wish of the officers of the Military Circle in Bucharest. In front of the palace are the small Drapelului Square and the Sărindar Fountain.

The next stop is Unirii Square, which is right in the center of the Capital. We decide to pass through the Old Town to reach this square. So we walk a few more meters on Calea Victoriei and then pass through the famous Macca-Villacrosse Passage to reach Lipscani street. We can hear music coming from somewhere down the street, as someone is playing a cheerful song at accordion. The Old Town is one of the main tourist areas in Bucharest, a place full of history, with many sights to visit such as the Old Princely Court, the Stavropoleos Monastery or Manuc's Inn.

From Lipscani street we turn right on Smârdan street, then again right on Șelari street and enter Halelor street, which goes straight to Unirii Square. We are greeted by the noises specific to a central square, but we find shelter in Unirii Park - a green area in the middle of the large boulevards crossing the square. A family is walking their dog on the alleys of the park, and two friends are talking and laughing on one of the benches.

We take some pictures in the small park and then go to the water fountains. Built in the late 1980s and recently upgraded, this is one of the longest systems of fountains in the world (1.4 km). Although they are currently stopped, the fountains in Unirii Square come to life starting with the last spring month, when shows of light, music and water attract thousands of tourists and Bucharesters. Usually organized in weekends, the Water Symphony event attracted more than 250,000 spectators in the 2019 season.

We follow Unirii Boulevard to reach Constituției Square, the perfect spot for those who want to have the famous Parliament Palace as the background for their holiday photos from Bucharest. The building, erected with immense human and financial effort at the wishes of former Communist leader Nicolae Ceaușescu, is the second largest administrative building for civilian use in the world, but also the heaviest building in the world.

The sun starts to set over the city, leaving us time for only a few more photos, but we promise to visit again the Parliament Palace - you can read about it here. 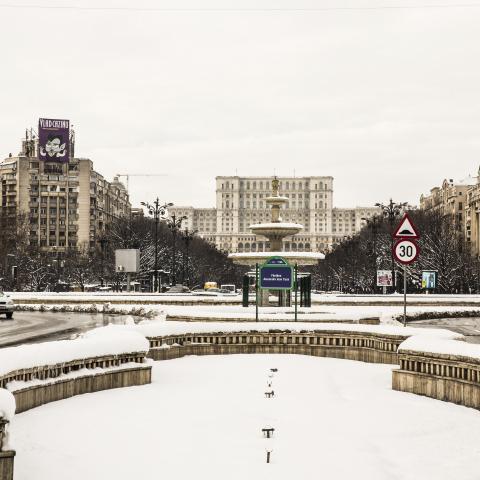 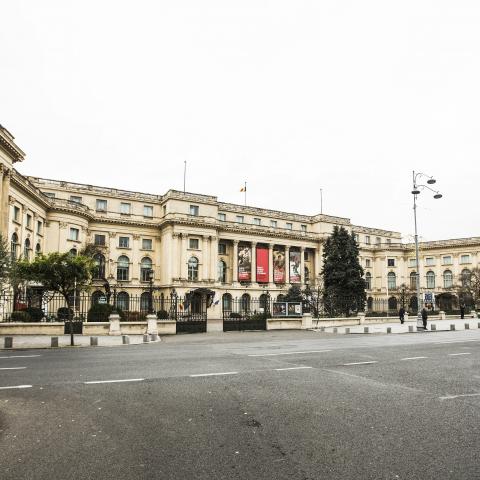 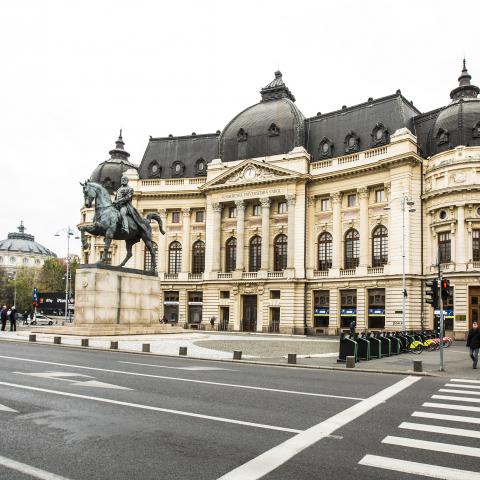 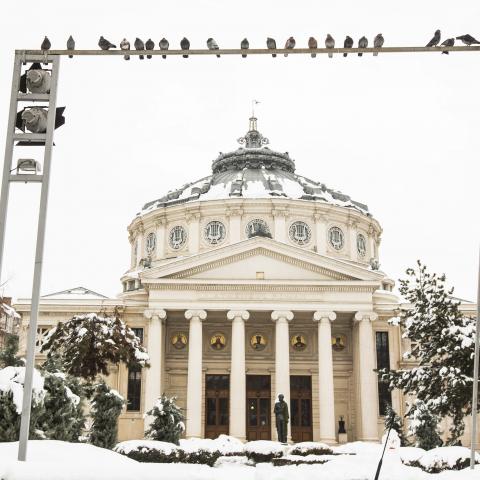 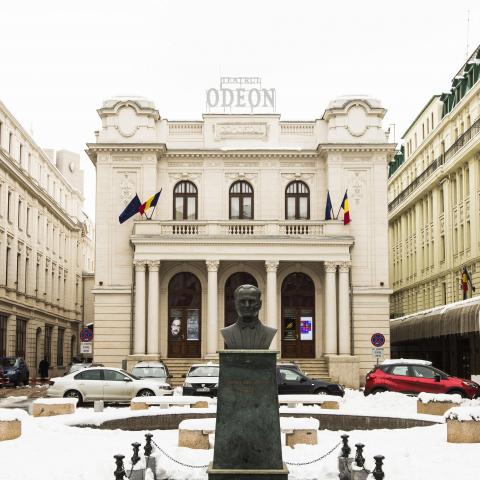 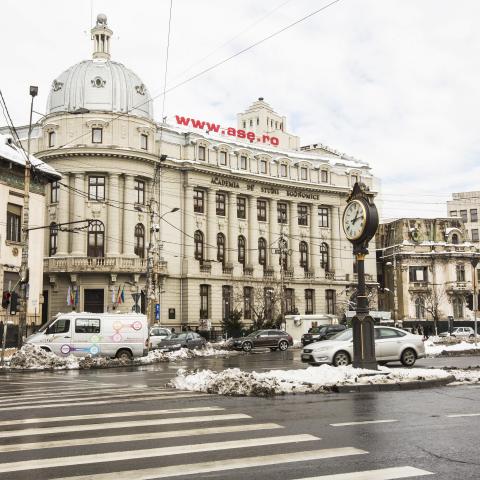