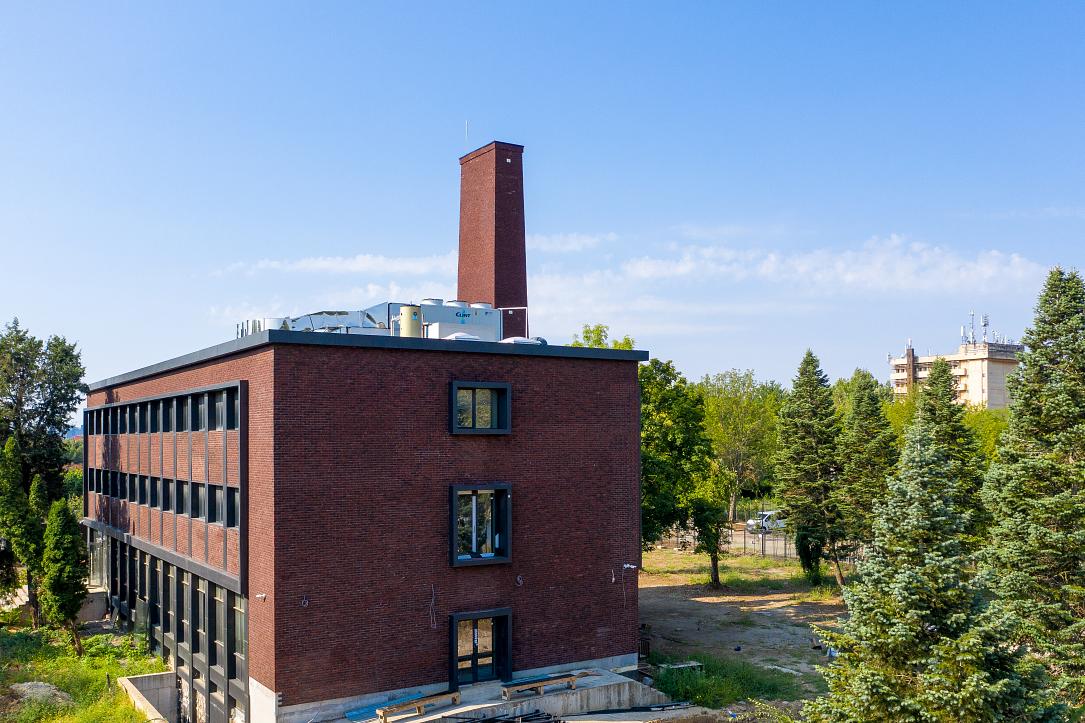 The Cambridge School of Bucharest opened this September the first phase of a new campus in northern Bucharest, a EUR 35 million investment. At full capacity, it will allow the school to accommodate up to 1,400 students, double the number currently enrolled, while offering a host of sports and creative activities in dedicated spaces.

When the students of the Cambridge School of Bucharest (CBS) started the new academic year, they walked into classrooms disinfected by a UV robot. Deployed at the end of the day, after the students and teachers leave, the robot is one measure brought on by the current coronavirus situation, one of the several taken by the school as it kicks off the new school year in a new campus in Pipera, in northern Bucharest.

The idea of the new campus emerged in 2016 after the school was bought by new shareholders - Walid Abboud, Roger Akoury, and Joseph Khoury. As the school wanted to grow, a 50,000 sqm plot of land was purchased in Pipera, and the project of a new campus kicked off.

This September, it opened its doors for the students, replacing the school’s previous location, in a historical building in the city’s Dorobanți area. All of the school’s students now learn at the new campus, but the school kept a kindergarten in Ștefan cel Mare, for the parents who live in the area, in addition to the kindergarten in Pipera.

The total investment stands at around EUR 35 million, covering both phases of the project.

“The coming phase, which we are working on, for the time being, will have new facilities. We will have two swimming pools, a theater, a huge auditorium; we’re going to have a canteen for our students, as well as a design and technology lab, a big one, and very well equipped,” Rita Hayek Maalouf, the director of CBS, explains.

There will also be a gymnasium and an urban farm as students are encouraged to get close to nature. “This is why our architects insisted, since we are close to the Băneasa forest, to continue the forest embedded here in our campus,” she adds. “We planted 1,300 trees just to continue the feeling that we are living in a forest, in a healthy environment and in nature, and not in a city with pollution.”

The opening of the campus allows the school to increase the number of students. At full capacity, the campus can accommodate 1,400 students, double the 700 who study in Pipera starting September. “Our plan is to reach the reach the 1,400 students in around five to six years’ time,” the CBS director says.

Most of the school’s students are in middle school, followed by the lower school. Apart from this, 80 students are enrolled in the school’s kindergartens in Ștefan cel Mare and Pipera. The school now has 80 teachers, compared to 60 before the move.

Students of 44 different nationalities study at the school, which offers a full British curriculum. Afterward, the majority of CBS’s students go on to study in Europe, in the UK, the Netherlands, Switzerland, Spain, or Italy. The school also had students who continued their studies in the United States, China, or in Romania, at the Carol Davila University of Medicine and Pharmacy, the Polytechnic University of Bucharest, or the Academy of Economic Studies (ASE).

On the curriculum side, the new campus means a host of new activities in dedicated spaces.

“Because the building is purpose-built, it allows us to have dedicated classrooms for design and technology, for arts. It improves the technology that we have available in all of our classrooms. Also, once we are able to begin again with team sports, it will allow us to have dedicated basketball courts, football pitches, a running track, and swimming pool as the development continues. So really it allows us to tailor what we have in the classroom around the curriculum needs of our students,” Heath Renfroe, the CBS deputy director, explains.

The school offered these types of activities before, but not always on campus. “Now the buildings are made for what we are going to be doing in classes, so it allows for greater ease in curricula delivery,” he says.

For instance, the diverse curriculum of Design & Technology, will be hosted in a dedicated lab, where students from year 2 to year 10 can learn robotics, woodwork, sewing, or cooking, among others.

The Covid-19 pandemic was a period of adjustment, as it happened across all sectors. The institution immediately moved its classes online under the period of home isolation and finished the school year and all of the curriculum elements in June, as planned.

For the start of the new school year, it has put in place a hybrid, rotating system, where students alternate in-classroom and online attendance but also factored in a potential return to online learning only.

“Our dream is to have all the kids back in face-to-face. At the moment, we’re in a hybrid system where we’ll be doing 50% of the students in to allow special distance, 50% at home, live streaming, interacting as much as they can at home. The students will have the opportunity to come into the school at least two days a week and interact with their teacher, ask questions face-to-face, so they’re not always going to be a passive observer. […] We’re offering a full curriculum to those students who can’t come into school for any particular reason,” Matthew Wemyss, CBS assistant school director, explains.

Besides securing the online environment the children study in, preparation also went into training the teachers to teach both in front of the classroom “and be able to share via webcam and screen-sharing technology to the students at home, and also communicate to the students at home via chat features and new features that help the teacher to manage the engagement with the students.” In addition, orientation meetings were held, so parents and children would familiarize themselves with the new system.

The meetings also revealed that many students missed being in the classroom and their teachers and friends, the school reps say. And while the period of at-home learning was a challenge no one expected, “in the end, it was very nice to see the entire school community come together and have as positive as an experience as we could have under those circumstances. But I think everybody’s looking forward to coming back.”