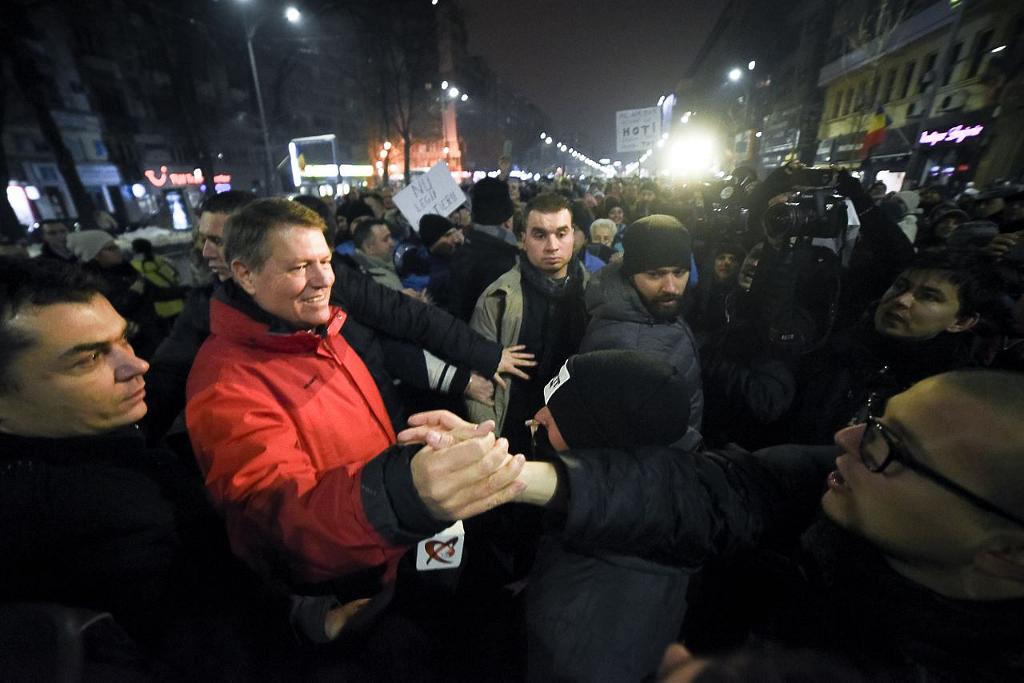 Between 15,000 and 20,000 people protested in Bucharest on Sunday evening against the Government’s initiative to pardon thousands of convicts and to change the criminal laws by weakening the anticorruption rules, according to local News.ro.

The protest started in Universitatii Square, in central Bucharest, where Romania’s President Klaus Iohannis joined the protesters for about 15 minutes. Dressed in a red ski jacket, the President walked through the crowd and shook hands with the protesters.

The number of protesters in the streets continued to grow even after Iohannis left, reaching over 15,000. The protesters left Universitatii Square towards the Victoriei Square, where the Government’s headquarter is located. They shouted against the Government and against the Social Democratic Party (PSD) and the Alliance of Liberals and Democrats (ALDE), the two parties that hold the majority in the Parliament after the December 11 elections.

After an hour in front of the Government’s building, the protesters went to the PSD and ALDE headquarters. On the way, the crowd continued to grow, reaching some 20,000 people. The protest ended in Victoriei Square around 9:30 PM, some four hours after it had started.

PSD leader Liviu Dragnea, who’s also the president of the Chamber of Deputies, called the protest a “new miners’ riot” and a “coup start”. “The President was outside the law today, targeting personal political advantages and asking for constitutional aberrations: the withdrawal of some ordinances, especially ones that had never been approved,” Dragnea wrote on Facebook. He added that he would not allow the President to overturn the constitutional order anymore.

President Klaus Iohannis made a surprising move last Wednesday, when he unexpectedly joined the cabinet meeting, as the Government was preparing to discuss two emergency ordinances of pardoning several thousand inmates and on changing the Penal Code. Iohannis asked Prime Minister Sorin Grindeanu not to approve any ordinances on justice without a transparent public consultation.

The same day, the Justice Ministry published the emergency ordinance drafts, which included several controversial measures, such as redefining conflict of interest and abuse of power as criminal offences. The other ordinance also included some controversial measures, such as pardoning people with suspended sentences. PSD leader Liviu Dragnea himself has a 2-year suspended prison sentence for fraud at the 2012 referendum for dismissing former President Traian Basescu. The conviction prevented Dragnea from becoming Prime Minister after the recent elections.

Top prosecutors and NGOs spoke against the draft bills and thousands of people went to the streets on Wednesday evening to protest. On Friday, President Iohannis asked the Government to withdraw the ordinances.

Dragnea didn’t have any reaction until Sunday evening, as he was in Washington last week, where he attended the events related to Donald Trump’s inauguration as the 45th U.S. President.