Update: Tens of thousands of Romanians march against prison pardons, changes to the criminal law 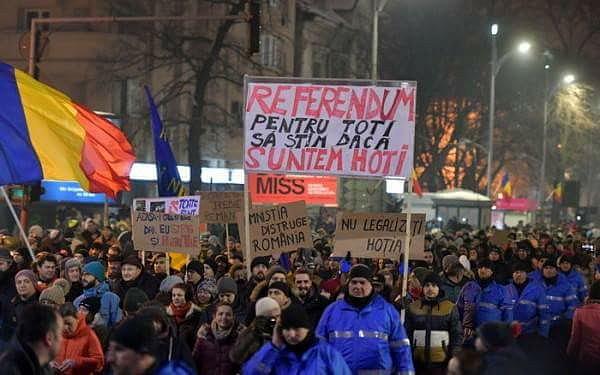 Some 50,000 Romanians went to the streets in Bucharest on Sunday to march against the prison pardons and changes to the criminal law the Government announced some ten days ago. Big protests also took place in Cluj-Napoca, Timisoara, Iasi, and other cities in Romania, according to local Mediafax newswire.

The protesters expressed their opposition to the Government’s bills on justice but also marched against the local televisions that have presented the previous protests in a distorted way and against the audiovisual authority, which hasn’t taken any measures against these television channels.

The protesters started gathering in Bucharest’s University Square around 17:00 and in one hour there were over 15,000 people in the square. They blocked the traffic and started to march towards the Parliament’s Palace and the Justice Ministry, in Bucharest’s Constitution Square. More people joined them on the way, so after 19:00 the rally reached some 25,000 people, according to estimates by Mediafax and Digi 24 news station. By 19:30, the crowd reached over 30,000, according to the same sources.

The protesters then marched towards the Victory Square, where the Romanian Government’s headquarters is located, which was the final stop of their march. After 20:00, the number of protesters in Bucharest went up to some 50,000. They filled up the boulevard that links the Victory Squate to the University Square.

Big protests also took place in Cluj-Napoca, Timisoara, and Sibiu, with some 10,000 people going to the streets in each of these cities. In Iasi, Brasov, Constanta, Ploiesti there were also thousands of protesters.

A few hundred Romanians also protested in front of Romania’s embassies in Paris, Brussels, London, and other European cities.

In total, close to 100,000 Romanians took part in the Sunday protests, believed to be some of the biggest the country has seen after the 1989 Revolution, according to Digi 24.

This is the second consecutive Sunday when Romanians go to the streets to protest against the Government’s announced intention to pardon some categories of convicted criminals and to change the criminal laws. The two bills have been criticized by the top people in the justice system, by the President and the opposition parties.

President Klaus Iohannis joined the rally in Bucharest last week and announced he would call for a referendum to ask Romanians if they agreed with such measures or if they wanted the anticorruption fight to continue.

Despite the protests and the opposition, the Government seems determined to approve these bills either by emergency ordinance or by assuming responsibility in front of the Parliament. The majority in the Parliament, made of the Social Democratic Party (PSD) and the Alliance of Liberals and Democrats (ALDE) supports these measures, which are believed to help many politicians get rid of convictions or ongoing corruption investigations.

PSD leader Liviu Dragnea may also benefit if the two bills are approved in the form presented by the Justice Ministry in mid-January.