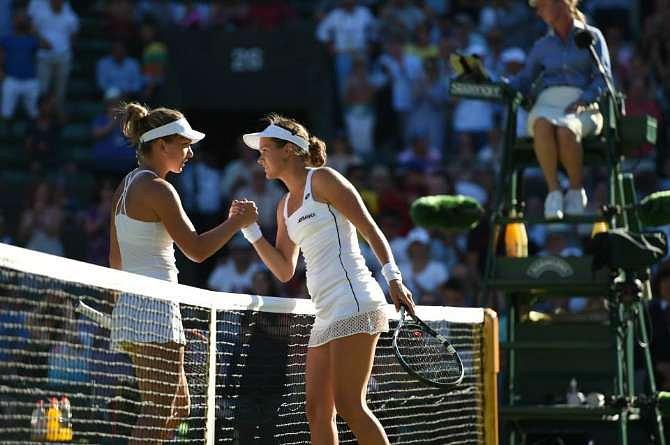 Romanian star Simona Halep will probably want to forget the past two months as she was eliminated in the early stages of the Roland Garros and Wimbledon grand slam tournaments by outsiders. Last year, she played the final at Roland Garros and reached the semifinals at Wimbledon.

Simona Halep (left), who is still number three in the WTA ranking of the best women's tennis players in the world, will not play in the second round of Wimbledon after she was eliminated in the first match of the tournament.

Slovakia’s Jana Cepelova, number 106 in the WTA ranking, beat Halep in three sets 5-7, 6-4, 6-3. The loss came as a shock for Simona Halep, who was a semifinalist at Wimbledon a year ago.

"To be honest, I have no reaction because, like I said at my first press conference last weekend, I had no expectations for this tournament. And now here I am," Halep said, cited by wtatennis.com. "I knew that it would be a difficult tournament for me, but yeah, I didn't expect to lose in the first round.”

Simona added that she had to continue working hard: “Life is not always good, but I have enough power to go ahead and just think about what I have to do better, and just get the good feeling back on court during my matches.”

The match lasted two hours and 14 minutes. Following this defeat, Halep might go down three spots in the WTA ranking, from number 3 to number 6.

Slovakia’s Cepelova will meet another Romanian in Wimbledon second round, Monica Niculescu, who defeated Monica Puig of Puerto Rico in the first round.

Simona Halep didn’t make it very far in this year’s Grand Slam tournaments. She was eliminated in the quarter finals of the Australian Open and the second round of the French Open at Roland Garros.