Famous American actor and environmentalist Leonardo DiCaprio posted a photo on a message on his Instagram account to support the Greenpeace activists’ efforts to preserve Romania’s last remaining virgin forests. 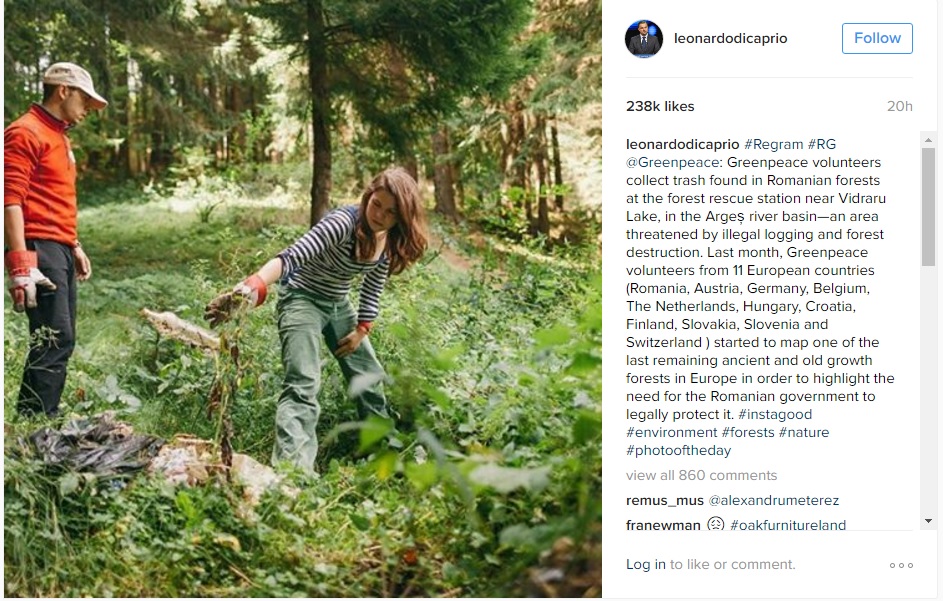 Greenpeace, which is one of the biggest environmental NGOs, has been working on mapping Romania’s last remaining ancient and old-growth forests and getting them protected by the state.

“This valuable and unique ecosystem needs your help. It is rapidly disappearing because it is not properly protected. Until now, laws have been too weak to save these forests from degradation and destruction. Greenpeace estimates that in the last decade, Romania has lost almost half of its ancient and old-growth forests. The remaining forests, an area estimated to be around 120 000 hectares, needs you to help protect them,” is Greenpeace’s call to action in an online petition through which the organization aims to gather signatures to convince the Environment Ministry to take more action in saving the country’s virgin forests. The petition is available here.

The efforts to preserve Romania’s virgin forests and the fight against illegal logging have gained international support in recent years.

Earlier this year, two members of famous American rock band Maroon 5 sent a letter to Romanian President Klaus Iohannis and Prime Minister Dacian Ciolos offering their support for the fight against illegal logging in the country.

His Royal Highness Prince Charles also expressed his concerns related to illegal logging in Romania. Prince Charles, who owns several guesthouses in Transylvania, has been visiting the country almost each summer in recent years and has been supporting the efforts to preserve the wild nature and the old villages in Transylvania.

Worrying statistics in Romania: Number of illegal logging cases goes up to nearly 100 per day