Protests continue for 13th day in a row: 50,000 people create live Romanian flag in front of the Government 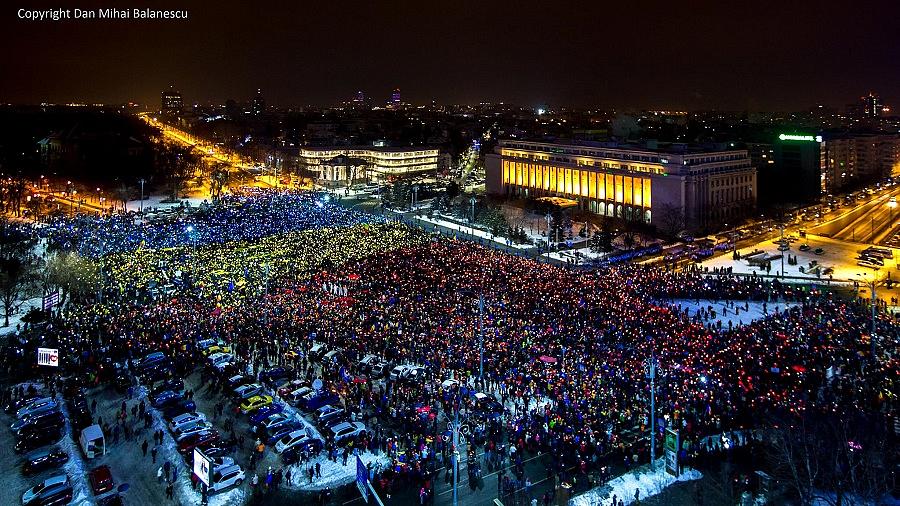 Some 50,000 people gathered in front of the Romanian Government’s building on Sunday evening to protests against the Sorin Grindeanu cabinet for the 13th day in a row. The protesters are asking for the Prime Minister’s resignation, according to local Digi 24.

The highlight of the evening was at 21:00 when the people in the square lit up the flashlights of their phones and created Romania’s flag using papers colored in red, yellow, and blue (opening photo by Dan Mihai Balanescu).

Here's how the moment looked on TV (video by Stirile TVR):

The protests in Bucharest’s Victoriei Square have continued all week, although the numbers of people gathering in front of the Government was lower than in the previous week. The cabinet led by Sorin Grindeanu survived a no-confidence motion on Wednesday and is unlikely to resign as it is supported by a solid majority in the Parliament.

The protests in Bucharest and Romania started some four weeks ago, on January 18, after the Government first announced its intention to modify the Criminal Code and pardon thousands of inmates by emergency ordinance. After almost two weeks of uncertainty, the cabinet passed an emergency ordinance to amend the Criminal Code on Tuesday, January 31, in a late evening session. The ordinance partly decriminalized some corruption offences such as abuse of office.

The decision sparked the biggest protests Romania has seen in the last 25 years, with tens of thousands of people going to the streets in Bucharest and all over Romania asking the Government to revoke the ordinance. The demonstrations were peaceful and the protesters, most of whom were young professionals, families with children, and students, found creative ways of expressing their messages.

Faced with the increasing street pressure, the Government repealed the controversial ordinance on Sunday, February 5. The same day, the biggest protests took place, with some 250,000 people lighting up Victoriei Square with their phones. About 500,000 were in the streets all over Romania on that day.

The protesters continued to ask for the Government’s resignation. However, justice minister Florin Iordache, who had supported the bill amending the Criminal Code, was the only cabinet member to resign.

The protests in Romania have had an impressive echo in the international media, with major newspapers and TV stations worldwide covering the events in Bucharest.