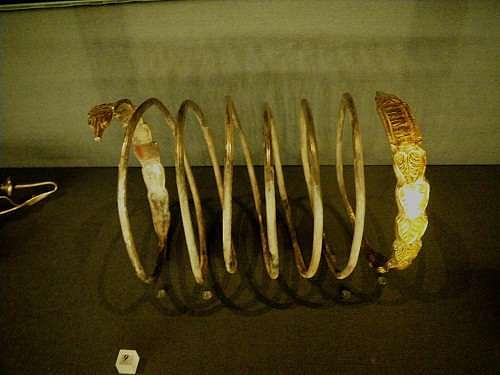 A documentary titled The Hunt for Transylvanian Gold premiers January 25 at the National History Museum of Romania (MNIR) in Bucharest.

The documentary looks at the investigation on the looting of 2000 year-old Dacian bracelets, discovered in the area of Sarmisegetuza. The ten-year investigation took place in Europe and North America, under the coordination of Romania’s current General Prosecutor Augustin Lazăr, who was at that time a prosecutor in Alba Iulia. The investigation revealed that treasure hunters discovered 24 gold spiral bracelets in the area. The fifty-minute film covers the police investigations and indictments of suspects, and the recovery of the artifacts. Of the 24 looted bracelets, 13 have been recovered.

The Dacian bracelets discovered at Sarmisegetuza can be seen as part of the permanent display Tezaur Istoric (Historical Treasure) at the MNIR.

Sarmisegetuza Regia was the capital of the Dacian state before the Roman invasion. The ruins of the fortress are located in Hunedoara county. It is the biggest of the Dacian fortresses in the Orastie mountains and was the core of the Dacian defensive system, which included six fortresses. It hosts the Circular Calendar, one of the most important Dacian circular sanctuaries. The Dacian capital saw its peak years under king Decebal, who was defeated by the Roman Empire led by emperor Traian. The Dacian fortresses in the Orastie mountains are an UNESCO World Heritage site since 1999.

In 2011 Romania announced it brought back the 13th bracelet in a batch recovered starting with 2005. A man from Orastie, who was part of a network that has been trafficking Dacian artifacts and jewelry worth some EUR 2.5 million, was sent to court in 2013.

The documentary is produced by Boston-based Kogainon Films. The event will open with speeches by Dan Dimăncescu, Romania’s honorary consul in Boston, Augustin Lazăr, Romania’s general prosecutor, and Ernest Oberländer-Târnoveanu, the manager of the National History Museum.

The screening starts at 17:00, and entry is free, within the available seating of 100.

The MNIR is opening on January 24, the date Romania celebrates 158 years since the union of the Romanian provinces of Moldova and Tara Românească, a temporary exhibition on the theme. It is titled The Union of the Provinces and the Reign of Alexandru Ioan Cuza and displays patrimony from MNIR's collection related to the event.

THE HUNT FOR TRANSYLVANIAN GOLD - TRAILER from Kogainon Films on Vimeo.