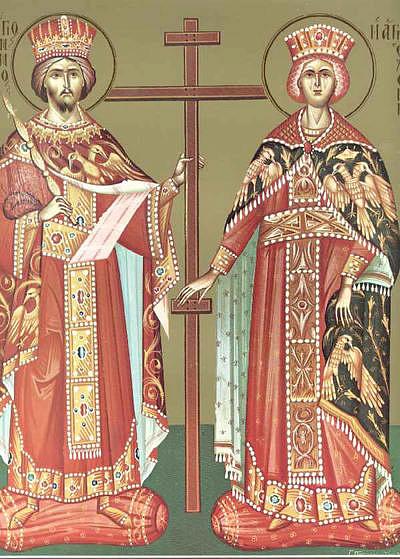 The Romanians celebrate the Saints Constantine and Helen today, May 21, two of the most important saints in the Orthodox calendar.

Also, more than 1.75 million Romanians named after the two saints celebrate their name day today. Most of them, namely some 1.1 million, are men. The most popular names are Constantin, Costel, Costin, Costi and, of course, Elena.

Saint Constantine, who is also known as Constantine the Great, was born in 274. His father was Caesar Constantius Chlorus and his mother was Saint Helen.

He was a Roman Emperor between 306 and 337. His first act as new emperor of Gaul and Britain was to grant the freedom to practice Christianity in the lands subject to him. Then, after becoming the sole ruler of the Western Roman Empire, he issued the Edict of Milan in 313, which guaranteed religious tolerance for Christians, according to Oca.org. Ten years later, when he became the sole ruler of the entire Roman Empire, he extended the provisions of the Edict of Milan to the whole Empire.

The Emperor and his family supported the repair of churches and also helped build others. He also moved the capital to the city of Byzantium, which was renamed Constantinopole, on May 11, 330. Saint Constantine the Great died on the Sunday of Pentecost on May 22, 337.

Saint Helen, the mother of Saint Constantine, was a Christian. She may have influenced many of his decisions taken in support of Christianity. Both Saints Constantine and his mother Saint Helen are called “Equals of the Apostles.”

Similar to other celebrations, the day of Saints Constantine and Helen is also surrounded by superstitions in Romania. For example, on this day, many farmers don’t work to avoid their fields being damaged by birds. However, in some regions, this is the last day one can sow corn, oats and millet.

Meanwhile, the shepherds light a fire today, called the Living Fire. They take their sheep and stay close to the fire, as it is believed that this ritual keeps them safe from damage and illnesses.