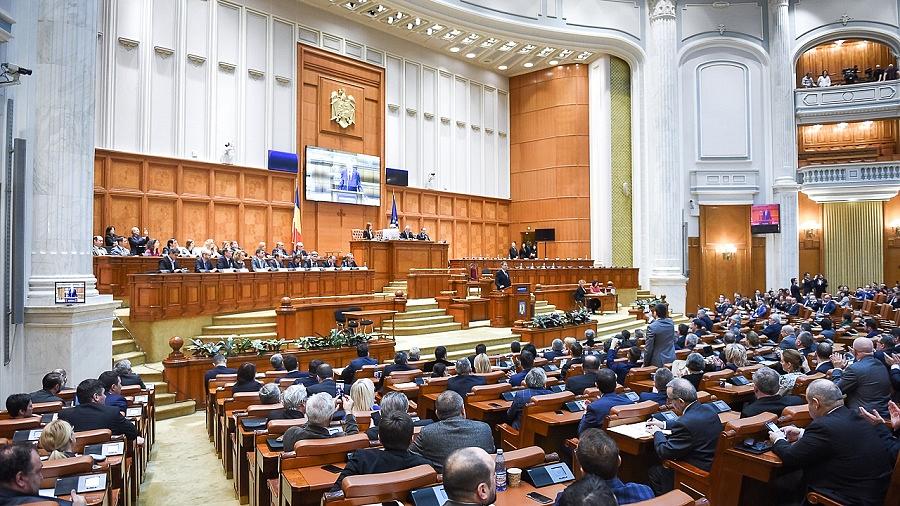 Romania’s Parliament adopted on Wednesday a critical statement against President Klaus Iohannis and the Superior Council of Magistracy (CSM), accusing the President of “abuse of rights” and "usurpation" of the Parliament’s “exclusive right to hold the Government accountable for its actions.”

The statement was proposed under a slightly different version by the Senate president Calin Popescu-Tariceanu three weeks ago, after the President and the Superior Council of Magistracy reacted to the Government’s decision to pass several important changes to the Criminal Code by emergency ordinance. Both the President and CSM notified Romania’s Constitutional Court (CCR) about a possible constitutional conflict resulted from the Government’s decision to change an important law for the justice system without consulting CSM. The CCR dismissed the notifications.

In the statement, the Parliament says that any judgements that the President, CSM or representatives of the Public Ministry make related to the Government’s activity are unconstitutional and inacceptable, and undermine the Parliament’s role and prestige.

“The direct way of electing the President has led to the false impression that he is the nation’s first representative, that he is a President of all Romanians, more legitimate and more representative than the Parliament,” reads the statement. The Parliament however considers itself the only constitutional representative of the Romanian society, and the only institution that can issue a structured and legal opinion in the name of the people. According to the Parliament, once elected, the President becomes “external to society” and has only a mediator role between society and public institutions.

Former President Traian Basescu, who is the leader of the People's Movement Party (PMP), Catalin Predoiu of the National Liberal Party (PNL), and former Culture Minister Vlad Alexandru of the Union to Save Romania (USR) party were among those who criticized the statement.

The Presidency also reacted to the statement saying that the views expressed by the Parliament are worrying and the statement can be interpreted as a form of pressure not only on the President but on other institutions as well.

“Romania’s Constitution clearly establishes that Romania’s President is elected directly by the citizens. He has legitimacy and representativeness equal to those of the Parliament,” the Presidency’s statement reads. The President is not exterior to society. On the contrary, he expresses society’s interests and, according to the Constitution, he must have an active role, not just a symbolical one.

The Presidency also says that the people's lack of trust in the Parliament won't be solved by blaming the President or other institutions for this. "The impression that the Parliament is just a spectator to political decisions could only be changed by holding authentic and transparent debates, by a responsible and predictable law making act, that serves society's general interest, and by an efficient control of the Government as a whole."

Some political commentators say the Parliament’s statement is the first step towards suspending President Klaus Iohannis. The President had his first conflict with the current parliamentary majority made of the Social Democratic Party (PSD) and the Alliance of Liberals and Democrats (ALDE) after the parliamentary elections in December 2016, when he refused to nominate the first candidate PSD proposed for the Prime Minister seat, without motivating his decision.

The President was again criticized by Senate president Calin Popescu Tariceanu in mid-January, when he unexpectedly went to a Government meeting and asked the cabinet led by Sorin Grindeanu not to pass any emergency bill on justice without a proper consultation. His participation in a protest organized in Bucharest against the Government’s intention to change the Criminal Code was also criticized.

After the Government adopted the emergency ordinance on justice, the President issued a harsh statement, saying that the bill was a blow on the rule of law from the enemies of justice. He then went to a CSM meeting and asked it to notify the Constitutional Court about a potential conflict between the executive and the judiciary. He also asked the Ombudsman to challenge the emergency ordinance on justice at the Constitutional Court.

The President’s speech in the Parliament, on February 7, also angered the Senate’s president who said that the Parliament didn’t need to be taught how to do its job.

A survey from April 2016 showed that over 45% of Romanians trusted the Presidency while only 12.6% trusted the Parliament. The population’s trust in the Parliament was negatively impacted in recent years by the high number of senators and deputies who were investigated for corruption, by the decisions not to allow the prosecution of some MPs, and by several initiatives aimed at weakening the fight against corruption in Romania.

Senate president Calin Popescu Tariceanu and his coalition partner Liviu Dragnea, who leads the Chamber of Deputies, vowed to make the Parliament a powerful institution in their new term.

Romanian Senate president: Everybody in Romania is gargling with corruption

Senate president: Romania should pull out from CVM