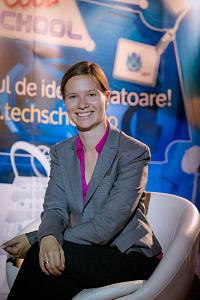 Romanian astrophysicist Aurora Simionescu, 33, has recently been appointed an Associate Professor at the Japanese Institute of Space and Astronautical Science (ISAS), one of the four principal sections of the Japan Aerospace Exploration Agency (JAXA).

She is the only non-Japanese to hold this position. Her responsibilities include conducting independent research, supervising student research projects, and teaching graduate classes with a focus on topics related to the large-scale structure of the Universe.

Her main research focus is “on the physics of the X-ray emitting gas in clusters of galaxies, from the smallest to the largest scales,” according to a presentation on her personal website.

In 2015, Simionescu was included on a list of the innovation leaders in Central and Eastern Europe (CEE), alongside eight other Romanians.

Before being appointed to this new position, she was an International Top Young Fellow at ISAS between 2013 and 2016. Here, she conducted research in the field of in high-energy astrophysics.

She previously held various other academic positions. She was a NASA-funded Visiting Scholar at the Harvard-Smithsonian Center for Astrophysics between 2007 and 2008. She was an Einstein Postdoctoral Research Fellow at Stanford University’s Kavli Institute for Particle Astrophysics and Cosmology (KIPAC) between 2009 and 2013.

Aurora Simionescu was born in 1983, in Braila, a city in Eastern Romania, and a port on the Danube. In her third high-school year, she was selected for a one-year study scholarship at the Massachusetts Deerfield Academy in the US. She earned her undergraduate degree at the Jacobs University Bremen, in Germany, with a thesis on Magnetic Fields in Galaxy Clusters. She went on to finish a PhD at the Ludwig Maximilians University Munich with a thesis titled “AGN-ICM interaction in nearby cool core clusters: energetics and transport processes”

“The exciting thing about astrophysics is that I don’t understand it. I try to expand the limits of my knowledge; every day a little more. That is the challenge,” she says in an article featuring her at www.jacobs-university.de