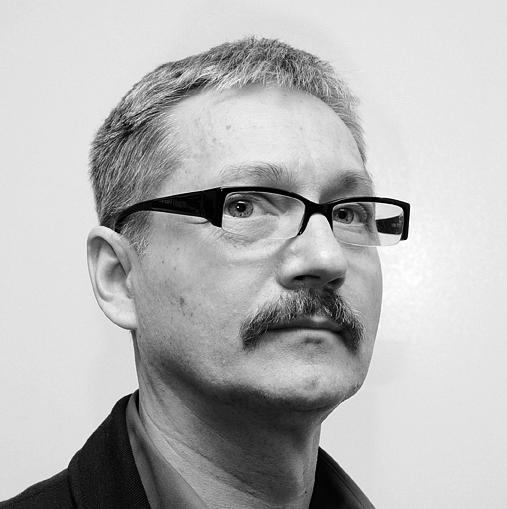 Andrei Grusznicki's films are, without exception, among the most interesting Romanian films of the past years. His 2009 long-feature debut, Cealaltă Irina/The Other Irene, is a gripping story of a couple's disintegration after the wife leaves to work in Egypt for a few months. Set in the mad 1990s with their wild mixture of communism and chaotic capitalism, driving people to work outside the country for some extra money, the film is also a laconic meditation on identity, loneliness, the truth and its illusory nature, and the individual quest for answers.

His second long-feature is similar in tone and theme but more striking in its style and scope. Quod Erat Demonstrandum is a drama/thriller set in the 1980s and centred on the friendship between Elena and Sorin, a mathematician and a computer scientist. While the latter has just published an article in an American scientific journal without the state's permission, Elena is waiting to be allowed to join her husband in France after he had left the country. In the meantime, Sorin asks Elena to carry a mysterious suitcase into France and they are both approached by a driven Securitate agent, testing not only their mutual loyalty but also their principles.

I met Andrei and talk with him about his films, his influences, and his audience.

Andrei, your last film, Quod Erat Demonstrandum, will be released in Romania in October. The luckiest among us caught it at TIFF, where it ran in the international competition; in Rome, where it won the Special Jury Prize, or in Wiesbaden, where it was awarded a special mention for Cristian Niculescu's set design. The film not only looks different but also has a rather original theme. Why a film on mathematicians; what made you write a story about scientists?

It's actually a really long story. Initially, I was inspired by a story I knew personally, about a man who traveled to the West for a training in 1986 and decided to stay there. The next step was to bring his wife and children over from communist Romania. This was an excruciating experience. In order to discourage people from 'escaping' this way, the state's strategy was to postpone the familial 'reunification' as much as possible. Sometimes it took years until it was final, which, obviously, lead to massive problems within the family.

At some point I realised I could not finance a project which included shooting outside of the country, so I decided to stay with the perspective of the family left behind in Romania. This is how I initially wrote the story of the wife and her waiting, hope and despair. Then I 'took off' from the reality of the initial story. I had to introduce the Securitate agent and it was only then when her friend's character was born. He was meant to personify the balance between, let's say, the Good and the Evil. At first he was an engineer.

As I was reading contemporary literature on that particular time I came across a book about mathematician Octav Onicescu, well, actually a collection on notes about him which were extracted from his Securitate file. And what puzzled me most is that the Securitate understood nothing about his work. He was allowed to teach at the university although he had some 'black entries' in his file. Hence, they had to rely on other people, collaborators or scientists, to find out whether what he was doing was valuable or not. It was value that kept Onicescu employed.

This blind search seemed typical of the communist regime and its set of values. It was then that I decided to turn the engineer into a mathematician, which is a domain of precision but also a speculative, dynamic one. I tried to keep this idea present in all areas of my script.

How did the idea to shoot in black and white come about?

Although the persistence of the 'greyness' of the 80s was very much alive in my memory, I didn't think about this option until the producer Velvet Moraru mentioned it. I have to admit I was a bit reluctant at first because I thought it might be truistic. But then again I was thinking of the displayed triumphalism of the “golden age”, in all media and official speeches. It was only facade of course, because Romania was anything but triumphant; it was impoverished and hopeless. It was a country with unemployment although officially there was no unemployment, a country in which factories were closed down although officially they were not closed down but 'marked for 'conservation'. This very idea of a perfectly closed, conserved unit was actually a perfect match to the structure of black and white. A few talks with the film's director of photography, Vivi Drăgan Vasile, were also 'guilty' for my decision.

Did this aesthetic decision bring about more technical or financial efforts than if you had shot in colour?

As far as I know it was more expensive, yes. Although in theory it should have been cheaper. But the fact that black-and-white film is hardly ever used anymore and that our film was damaged and had to be repaired in post-production made the experiment quite costly. But I think in the end it was worth the effort.

How did you research the academic milieu of that time, the mathematical theories and the way the Securitate used to operate?

I was able to use my own academic ties for that. I was a student at polytechnics at that time, I was studying data transmission techniques. The moment my hero 'became' a mathematician, I approached my former mathematics professor, Mr. Octavian Stănăsilă. I showed him the script and asked him to 'tear it apart'. Which he did. The latter part referring to the formalization of the 'theorems' studied by the character was supervised by young mathematicians who were present on set.

Regarding the Securitate: in addition to the books I read, I could also rely on the expertise of a former Securitate agent who told us about the methods used.

QED is your second long-feature, your first being Cealaltă Irina/The Other Irene in 2006. Both films are about social issues typical of a certain historical period (the decision to work abroad or to flee the country) but for me they are more about an internal search.

Yes, that is also what I think. In the case of my first film, the quest for the truth is essential. Obviously, the hero will not find it because the truth is not attainable. In QED, every character searches for something else but what unites them all is the wish for a personal 'achievement'. For Sorin it’s all about his career, for Elena it's a personal, familial one, and for Voican it may bring about a promotion.

What are the audience’s reactions to your films; did you notice any differences between a Romanian and a foreign audience? Do people usually ask about the film’s looks, their historical settings, or also about characters’ individuality?

I will talk about QED since I’ve been with the movie to several festivals I am really fond of. The questions usually all revolve around the origin of the idea, whether I added a lot of fictional details, how we worked on the visual representation of those years, how we obtained all the objects typical of that time… I have to say sometimes it feels like we were talking about a film set 100 years ago and not in the relatively recent past. I remember how difficult it was to re-animate the “Coral” computers used in the era, a brand which was produced in Romania en masse during the 1980s. It was a real effort to find a few old cases and turn them into something more or less functioning. Other questions referred to the human side of the story, to the faithfulness of the emotional state in the era.

I would split the questions into three types: foreign audiences without any communist experiences who just watched the film; the Romanians living abroad for a long time who were familiar with the 1980s in Romania and were impressed and repelled by what they were put through during those years; and the ones who had lived in communism and said “yes, we also had that!”. Basically everyone who has experienced a communist system has their own interpretation. I can remember best an audience member in Karlovy Vary who said one particular moment in the film was fictitious because it differed from what she knew from her own experience of that era. The scene features Sorin having access to Elena’s computer after working hours. Honestly, I don’t know much about Czechoslovakia in communist days but I know that this was actually Romanian’s greatest power back then: friendship. Friendship made the unbearable bearable. A friend could get you in everywhere, get you an appointment with the most famous and hard-to-get doctor, or solve your renting problems.

You studied electronics before you shot films; do you think this education has had an effect on your writing and directing? What impressed most with your film is their emotional understatement. With the highly charged themes they’re dealing, they could have been much more 'explosive' but you chose a restraint which is hard to find in Romanian films. It made me draw an immediate with a scientific approach. Am I taking it too far, or where does your fable for this approach come from?

Yes, of course, there is a certain 'scientific' analysis to my work and maybe it does come from my education. I also have a predilection for a certain type of “documented reality” because I think fiction is the form to transpose immediate reality. During my electronics years I spent years with the student theatre group “Podul” and I learned a certain kind of restrain there, from Mr. Cătălin Naum and the way he was working with actors.

At some point you told me you liked using humour, especially black humour. Irina shows this but QED almost not at all. Have you been also thinking about comedies or dramas with more comedic elements (as Americans like to say, “dramedies”)?

As I was saying, reality is full of contradictions and absurdities, everything is questioned, twisted around, interpreted. It is here that I try to extract what I consider to be the humour in our everyday lives. Comedies are a difficult genre but yes, I admit the interest me. And yes, there is a (hidden) thought of a character evolving in a comedic space.

Since we are talking about the future, can you tell us something about your current projects?

At the moment, the story closest to me, meaning on my desk, is one which kind of takes off where QED ended. The difference is that it takes place in the present in another type of society but it’s still about friendship, values and valorisation. However, value means a completely different thing than 30 years ago, and friendship has lost the meaning it had in the 1980s.

Quod Erat Demonstrandum will be released on 10 October and The Other Irene is available on DVD at Cărturești shops and their online platform.