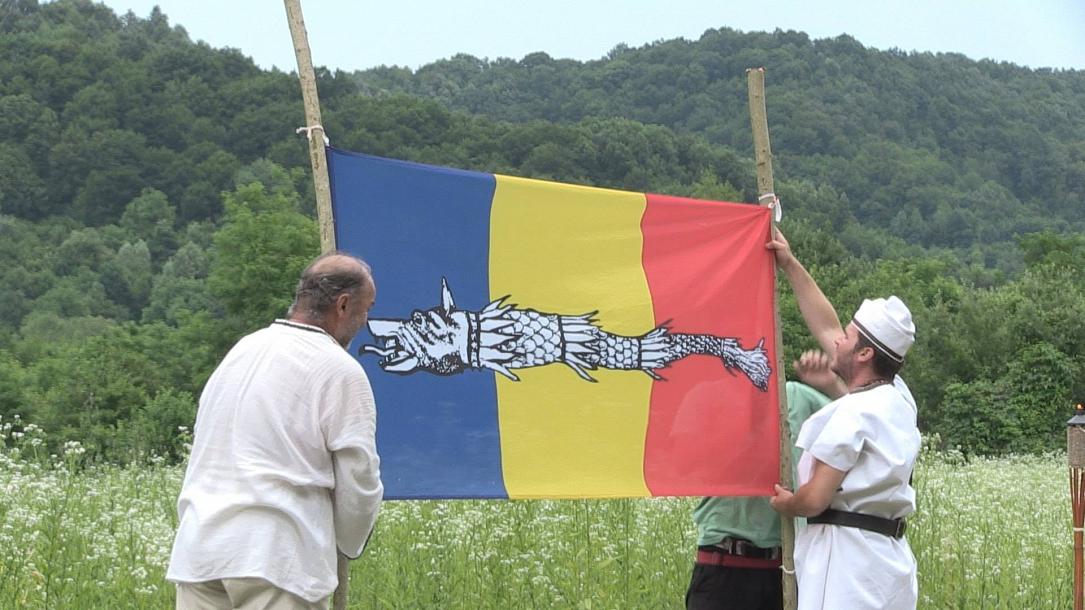 Brand new documentary Dacii liberi/Free Dacians was released on November 30, one day before Romania’s National Day and the celebration of the much-talked-about Centenary (i.e. 100 years since the unification of the Romanian territories in 1918) and its timing couldn't be better.

Having premiered at TIFF in June and touring the country now, the film fits well in a period in which the nationalistic discourse has reached new heights, not just in Romania, but also in neighbouring countries.

Free Dacians focuses on a growing community who believe that the ancient inhabitants of the territories now known as Romania are the ultimate ideal to aspire to. The Dacians inhabited said territories and were conquered by the Romans in 106 AD. As generations of Romanians have been taught growing up, we are the descendants of the Dacians and the Romans, and for some, the former are the stuff of legend, the embodiment of heroism and masculinity, and going back to a Dacian lifestyle is not only a return to the purity of the “ancient roots”, but also to the only way of life suitable for the Romanian people. For decades, the collective memory has considered them as brave, faultless, and ancient Dacia as the paradise lost. The "free Dacians" of the film's title refer to a group of Dacians that left the territories occupied eventually by the Romans and allegedly fought to recover them, giving them an even more heroic connotation.

In the documentary, the most fervent admirers of the myth live in a village that is “Dacian” and participate in Dacology conferences. Others are slightly more moderate, while others are factual and critical in their approach, studying the Dacians from a balanced historical perspective. The most memorable bits though are the plainly absurd statements of some hard-liners, such as the idea that the Dacians built the Egyptian pyramids. The big prize must surely go to Gheorghe Funar, the former mayor of Cluj-Napoca, who says Jesus (surely blond and blue-eyed) must have been born in Dacia since he was born in “Galilee”, which comes from “Gali” (i.e. the Gauls), which actually comes from “Galați”, a town in modern-day Romania (and probably ignorant of its universal relevance). He is also the one to enlighten the audience that Germany (Ger. Deutschland) actually means “the land of the Dacians”.

As amusing, infuriating, and (mostly) forehead-slappingly absurd as these theories are, I wish its directors Monica Lăzurean-Gorgan and Andrei Gorgan had been more active in their approach and made the film less a show and more a study on nationalism, patriotism, traditions, or ethnic, religious, and racial issues. They are content with watching and letting the subjects talk, and even if they do intervene in a technical sense (through editing mostly), they stay away from any open judgement. While this may seem fair to the multitude of opinions expressed, I could not help thinking they were opting for a safe and ultimately impossible-to-challenge position. As it is, the film is a presentation of moments, ideas, and world views, but it does not go deeper than that.

According to its makers , Free Dacians is meant to invite the audience to draw their own conclusions, but again, this sounds more like an excuse to me, because the film does express some bias but does not have the courage to take it further. Sadly, this leaves the subjects with the more extreme opinions being presented as mere laughing stock, which is easy both as a directorial choice and in terms of an immediate effect on the amused audience, but it is also a sloppy choice. I would have liked to know how such (plainly) absurd ideas have gained ground and I am afraid the reasons for it, and the consequences, are less of a laughing matter. A German friend with whom I watched the film at TIFF was not sure until the end whether the film was a parody or an observation of “real” people and ideas, and I guess that would sum up best my problem with the film.

Nevertheless, as long as the audience is willing to go beyond the easy (albeit entertaining, admittedly) laughs and the head-shaking, Free Dacians is a welcome opportunity to give a very serious matter some serious thought.