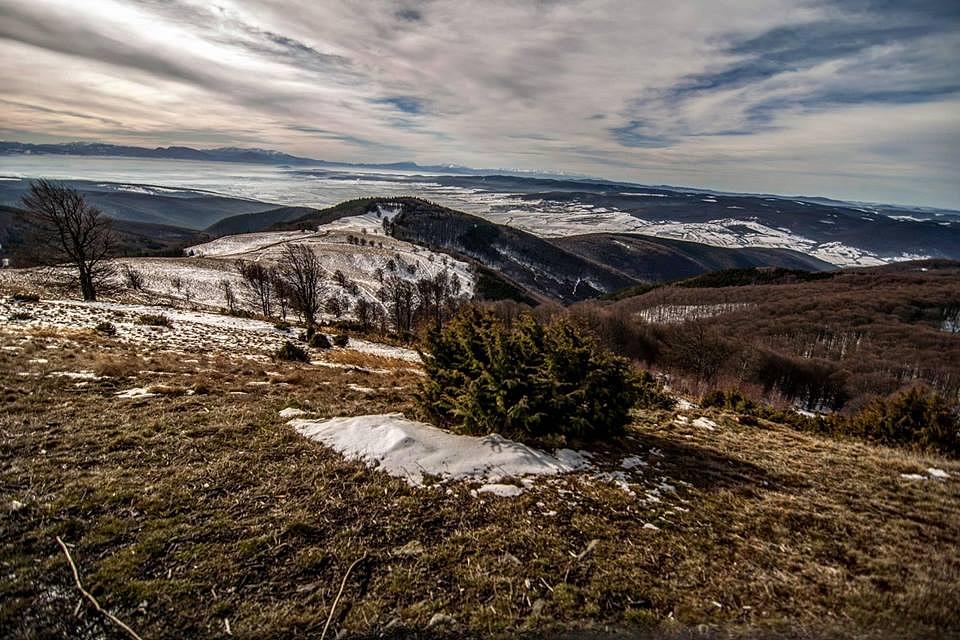 Time to hit the roads, spring is here! A marvelous place awaits to be discovered: Şugaş Băi, a small resort at the foot of Baraolt Mountains, in the valley of Şugas stream, is almost ten kilometers away from Sfântu Gheorghe, in Covasna county.

This region is popular for its mineral water deposits, one of the largest in Europe, with curative properties, and … many bears. Over 1,000 bears have been reported living in Covasna county, according to the latest census of the Covasna Environmental Protection Agency.

The Baraolt Mountains area is a blessing. One can enjoy a relaxing holiday, with many things to visit no matter the season. The entire territory of the massif is included in the network of Natura 2000 sites and abounds in plants and animal species, some endemic or protected by law.

Connect to the source of life

There are thousands of mineral water springs in Covasna county, some of them quite popular, while others are known only by locals. Each of them is unique in its own way, has specific content, taste, and recommendation in regards to treating or alleviating the symptoms of some diseases. The most famous localities for the mineral water properties are Şugaş Băi, Vâlcele Băi, Belin, Malnaş Băi. Micfalau, Biborțeni, Ozunca Băi, and Olteni.

In some places in Covasna county, you can hardly find fresh water fountains, but I'm sure you won't mind quenching your thirst with mineral water. It’s healthy, it’s free, and there’s no better natural remedy for the body & soul. The genesis of mineral waters is related mainly to post-volcanic phenomena in the area.

The Elisabeta mineral water spring in Şugaş Băi is an ancient remedy against liver disease and gastritis. In Vâlcele Băi, there is a spring of mineral water with an extremely high content of magnesium; therefore it is an excellent remedy for ulcer, osteoporosis, and rheumatism.

At Balvanyos, a resort in the north part of the Covasna county, there is an "eye spring" that treats conjunctivitis. The trees around the spring are covered with dozens of handkerchiefs used by those who have washed their eyes with this miraculous water.

The authorities in Covasna and Harghita joined forces a few years ago and rehabilitated some spa potential abandoned resorts. The local media says that EUR 2.5 million were invested for building infrastructure, golf and tennis courts restoration, adventure park layout, SPA development and so on.

What better way to unwind and relax but by having access to a wellness center? Here, you can benefit from sauna, hydromassage, relaxation massage and massage with jade stones, facilities that are now possible in Şugaş Băi because the resort has benefited of local and E.U. investments as part of the "Mineral Waters Road" project.

Şugaş Băi resort is also famous for its baths and mofettas, indicated for cardiac diseases and circulatory system. Here, tourists have to be very careful because the gas is toxic and should be inhaled according to the doctor's recommendation.
Healthy and sporty tourists find here the ideal place for all kinds of outdoor activities. There are two ski slopes, both of medium difficulty, with artificial snow guns, where beginner and intermediate skiers can practice their moves.

The network of tourist routes in the Baraolt Mountains includes about 350 km of marked tourist trails. Besides these, there are numerous paths and forest roads that are suitable for mountain biking. The CovAlpin Association of Tourism and Ecology will soon launch a trilingual travel guide with ten routes from the Baraolt Mountains.

The area offers unforgettable views and makes the entire curve of the Carpathians visible. From the eastern end of Fagaras to Iezer, Piatra Craiului, Bucegi, Piatra Mare, Postavarul, Baiului, Ciucas, Vrancei Mountains – all will all be at your feet if you decide to enjoy the hiking routes. In addition, some picturesque villages can be embedded in your trip, both as a dining place and as a tourist attraction. It is worth mentioning Valea Zălanului, a village lost in the mire of time where Prince Charles bought a traditional house or Miclosoara with the beautiful castle.

Even if the skiing season is over, the fun goes on, as there are many things you can do & see here.

Horse-riding
The horse-riding center of Count Kalnoky in Valea Crişului or Barabas Equestrian Center in Arcuş are both practically at the foot of the massif, regularly organizing riding camps and thematic excursions in the area.

Trail running
Sugas Race is undoubtedly the most prominent event taking place in the resort, every year, in October. Until now, thousands of people have heard and visited Şugaş Băi due to the promotion of this sports competition. The number of participants is growing, but it is difficult to accommodate everybody.