Skip to main content
Daily News
(P) Questfield opens the doors of a bilingual primary school, the first school in Romania with its own uniquely-designed educational concept 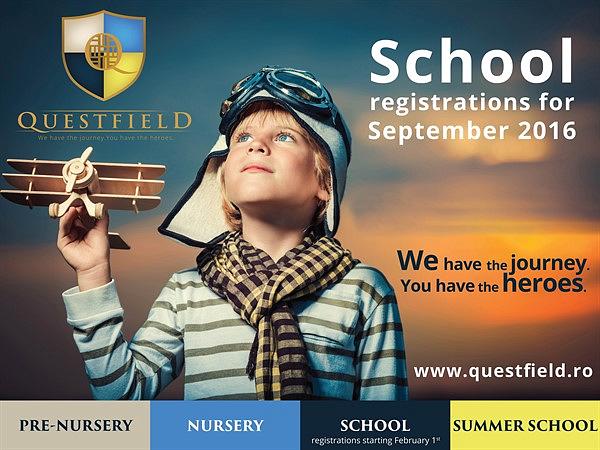 Questfield (former Little London Pipera Nursery School) announces the opening of the bilingual primary school Questfield, already authorized by the Ministry of Education and Scientific Research of Romania. Questfield is one of the top 10 international educational institutions in Bucharest and the first school in Romania with its own educational concept.

Questfield School will absorb an investment of 600.000 euro and will be located near the nursery school with the same name, on Titu Maiorescu Street, no. 28, Voluntari - Pipera, Ilfov. Questfield School will form - together with the nursery school - a school campus with a building area of 3200 square meters (3 buildings) and 4000 square meters of green space. The deadline for finishing its purpose-built building is August 2016, followed by the school’s official opening that will take place in September 2016.

Fabiola Hosu, Head of School, with more than 20 years of experience in the educational field is now proposing the first authentic educational concept in Romania, endorsing the opening of the only school with its uniquely-designed curriculum and the highest number of English classes of the three bilingual schools currently existing in Bucharest and Ilfov.

”Through the opening of Questfield bilingual school and the launch of this new educational concept, we would like to pave the way for Romanian curricular design and innovative schools that are working on their own educational philosophy, paying attention to their organisational culture, building and inventing themselves around the connection child - parent - teacher - educational context - curriculum. Our endeavour represents the first viable alternative to the state curricular products, and we hope the beginning of the change of the Romanian school paradigm.”, Fabiola Hosu, executive and founder of the Little London project now bearing the name of Questfield.

Questfield School’s educational team consists of specialised teachers with expertise in both state or private, international or Romanian systems, themselves learning models for children. Some of them have been working for over one year already to refine the existent curricular design into a brand new concept. The school fees for the 2016-2017 school year start from 455 euro for the preparatory grade / Year 2 and vary depending on the chosen program.

Should you want to meet a part of the educational team and find out more about the curriculum, school program, discounts and how Questfield School will look like, we shall be waiting for you all at the presentation event where you can meet the project initiator and founding member, Fabiola Hosu. The presentation will take place on February 17th, 2016 at Hotel Tecadra, Erou Iancu Nicolae Street, no. 67A, Voluntari, Ilfov, at 17:30 and will be held in Romanian. You can register for the event directly on the Facebook page.

Questfield is an educational institution authorized by the Ministry of Education and Scientific Research of Romania with its own uniquely designed educational concept and a curriculum based on the British model. Questfield consists of a pre-nursery, a nursery school, a primary school and a summer school program. Questfield's short-term plans include the development of the primary school up to high school level.

This is a project that has been developed between 2003-2016 due to the expertise in the field of education of its founder, Fabiola Hosu and the motivation and involvement of its transformational teachers and enthusiastic team, becoming a successful model, a benchmark in the private education field.