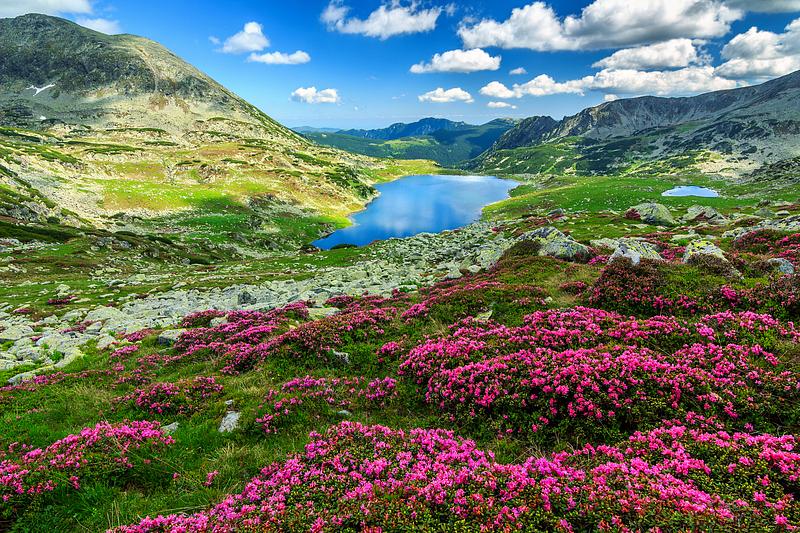 As travel plans need to be put on hold until the authorities issue new guidelines, armchair journeys are taking center stage. We have selected below several videos showcasing some of the most impressive nature sites in the country to serve as distraction for now and inspiration for future travel.

This is the first national park established in Romania, in 1935. It has a high number of mountain peaks of over 2,000 meters and is home to the largest glacial lake in Romania, Bucura. The area shelters an old-growth forest and a flora of over 1000 plant species. Wolves, brown bear, wild boar, Eurasian lynx, European wildcat, chamois, roe deer and red deer, as well as small carnivore species such as Eurasian badger and Eurasian otter can be found in the park.

Pâclele Mari is one of the main mud volcanoes sites in the Land of Buzău (Ținutul Buzăului), in southeastern Romania. The mud volcanoes are volcano-shaped structures created by the eruption of mud and natural gases, from almost 3 km deep. The gases that erupt get mixed with water, salt or clay and end up creating a lunar-like landscape, where vegetation is scarce. This video was produced by Ținutul Buzăului Association, which works to promote the area according to principles such as sustainable development, civic involvement, education, and environment protection.

The picturesque hills of Mânzălești, a commune in the northern part of Buzău county, invite travelers to pause and take in their beauty. This video, also a production of Ținutul Buzăului Association, shows a fall sunset over the vast, unaltered beauty of the landscape.

The Meledic plateau, in the commune of Mânzălești, is a nature reserve, where salt is a predominant element. Right at the very entrance to the commune there is a ten-meter tall white spur of volcanic rock and chalk. Not very far away is the Meledic lake, one of the six found in the reserve, which the locals call a “bottomless” one. About one km away from Meledic, another interesting formation awaits visitors: the S6 Mânzăleşti salt cave. The 1,257-meter long cave was named, in 1980, the longest cave inside a salt formation. However, in 1983, the 3,100-meter Malham cave in Israel, close to the Dead Sea, became the holder of the record. The video, the work of Ținutul Buzăului Association and Digi World, presents the history of the site and how the salt mountains were formed.

This vast park located in the southwestern part of the country is considered an open air museum for its rich geological diversity. The Mediterranean-like climate and varying altitudes foster more than 1,660 plants species and more than 5,200 animal species. The astonishing views of the Danube meandering inside the park have been captured in this video of Natura Vie Foundation, offering a virtual alternative to a trip on site.

Covering the Cerna river basin from the river’s source and continuing to the junction point with the Belareca River, the park is covered with forests, where the trained eye can spot beech, spruce, fir, elm, sycamore, ash, hornbeam, quaking asp, hazel, rowan and European spindle. There's also a very large variety of butterfly species to be seen here, in addition to the spectacular Cerna gorges or the Domogled cliff wall.

The YouTube channel of Natura Vie foundation has a wealth of videos highlighting nature spots across Romania, including Mehedinţi Plateau Geopark, Jiu Corridor, the Olt-Danube confluence, the Dobrogea Gorges, the Razim-Sinoe Complex, Lake Techirgiol or Cap Aurora. They are all available here.

The second-largest delta in Europe, the Danube Delta is a UNESCO World Heritage site hosting over 300 species of birds as well as 45 freshwater fish species in its numerous lakes and marshes. It is a haven for birdwatchers, lovers of wildlife and fishers, and one of the best spots for a quiet vacation. Until that is possible again, the Danube Delta Biosphere Reservation has posted on its YouTube channel numerous videos on the wildlife and nature phenomena that can be found there. An UNESCO video on the site also showcases the lifestyle of the residents of the area.