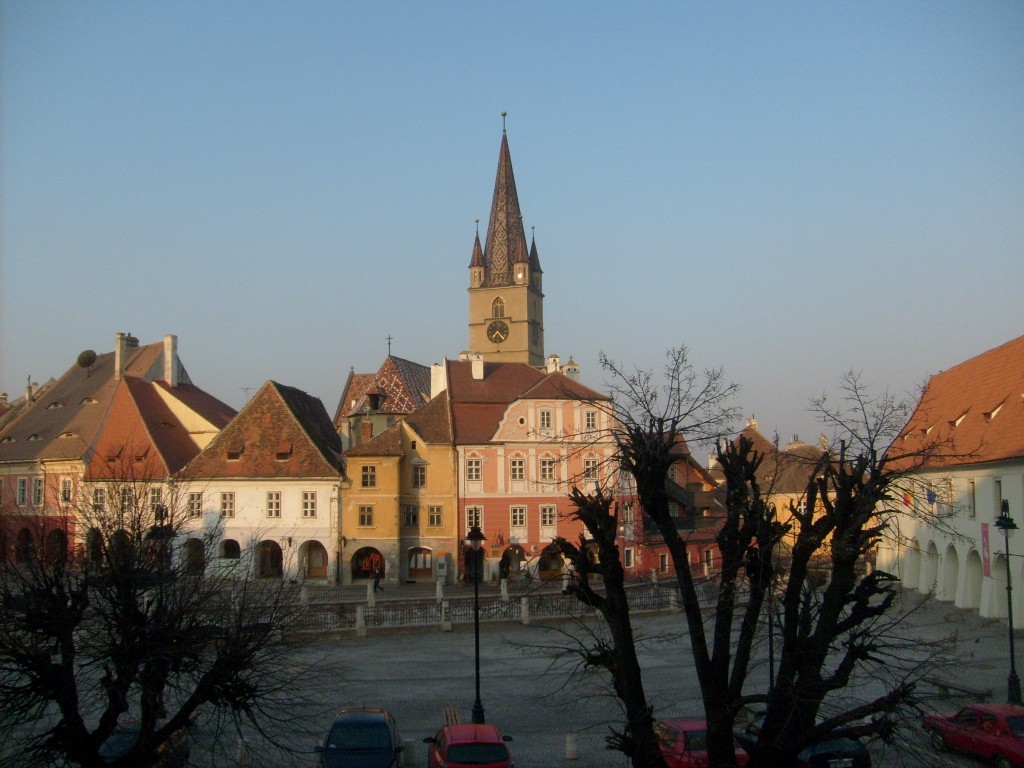 Guest writer Mariana Ganea takes a trip to the central city of Sibiu and discovers its medieval charm.

Sibiu presents itself as a true culture and tourism capital of Romania, appealing to tourists with its medieval charm, the wonderful natural landscapes of its surroundings and its local gastronomy and tradition.

The city of Sibiu is one of the most important cities in Transylvania and is situated at something of a cross roads on the fourth Pan-European Corridor, on European roads :E68 and E 81 and national road DN1.

History. The history of the city of Sibiu starts is connected with the old folk tale of the Pied Piper of Hamelin. The story goes that the children led away by the eponymous Piper emerged from the ‘Almasch’ caves (Varghis) in Transylvania, near the present location of Sibiu. The fortresses and fortified villages in Transylvania were founded in the 12th century by immigrants coming from the Moselle valley area, known as Saxons. The first documentary reference to the Sibiu area dates back to1191, when Pope Celestine III confirmed the existence of the free community of Germans in Transylvania as having its headquarters in Sibiu (Cibinium). The Hungarian kings granted numerous rights and benefits to the Saxons, in exchange for their help in defending the lands against the attacks of the Tatars and Turks. They created ‘the land of the 7 fortresses’, 7 fortified cities, as well as numerous villages in which fortified churches were erected. Sibiu became the most important ethnic German city among the seven cities that gave Transylvania its German name Siebenbürgen ( seven cities). In the 14th century, Sibiu was an important trade center. By 1376, the town's craftsmen were divided into 19 guilds. During the 18th and 19th centuries, the city became the second and later the most important center of ethnic Transylvanian Romanians in the Austro-Hungarian Empire. After World War I, when the Austro-Hungarian Empire was dissolved, Sibiu became part of Romania with the majority of its population still ethnic German (until 1941). There was also a large Romanian community, as well as a small Hungarian population. Starting from the 1950s and until after 1990, most of the city's ethnic Germans emigrated to Germany. The city is first mentioned with the name Cibiunium (see above), its German name is Hermanstadt, while the offical name of the city became Sibiu in 1919

Traditionally the city of Sibiu is famous for its mix of cultures. Although now the great majority of the population is Romanians (94 percent), there are still some Germans, descendants of the Saxon colonists, Hungarians, Roma and a very small Jewish community, all contributing to the city life with their specific cultural influences.

The same diversity also characterizes the religious life. Together with the Orthodox community, Reformed, Roman-Catholics and Greek Catholics live and practice their faith in Sibiu.

Sibiu has always been perceived as a cultural city due to the secular traditions and the artistic and cultural heritage of the city and its surroundings. To demonstrate the cultural role of Sibiu, I’d like to briefly present few facts and events that built the cultural tradition of this Transylvanian city.

1380 - the first documented school in the Kingdom of Hungary

1778 - the first theatre in Transylvania opened

1817 -  the first museum in Transylvania and the second in Europe – Brukental Museum opened,

1853 – the first edition of the 'Romanian Telegraph' published, the oldest newspaper in Romania

2007 - Sibiu was the European Capital of Culture

Religious sites. Sibiu's history has given it a wide variety of religious buildings: Orthodox, Greco-catholic, Romano-Catholic, Evangelic, Reformed(calivinistic) churches, a Franciscan monastery and a Jewish Synagogue.

Villages, resorts : Around the city of Sibiu are very important villages, resorts and locations which are famous from natural, historical or medical perspective. The best known are : Paltinis peak (1440 m altitude), and the oldest resort in Romania, Ocna Sibiului very famous for its naturally therapeutic waters and Marginimea Sibiului, which is a unique ethnographic area.

Drinks: Palinka, wines (Tarnave vineyard, which is located on the Tarnave plateau in north east of the county of Sibiu).

How to arrive there ?

By airplane : Sibiu International Airport is located on national road DN1, at 3 kilometers from the city center.

By train: Numerous train connections, including trains from Bucharest.