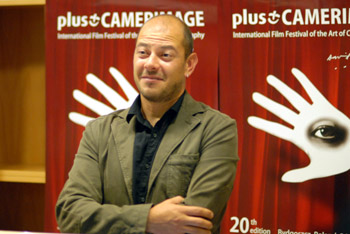 Romanian image director and photographer Mihai Mălaimare Jr. recently received a second prize as Best Cinematographer for his work on the film The Master. After being awarded by the Boston Society of Film Critics at end-2012, the 38-year old Romanian received a similar prize from the National Society of Film Critics. The 47th gala organized by the National Society of Film Critics took place last weekend at the Elinor Bunin Munroe Center in New York. The winner for 2011 was Emmanuel Lubezki for his work in The Tree of Life.  Mihai Mălaimare Jr. was also nominated as Best Cinematographer for the Satellite Awards and Critics' Choice Awards.

With the nominations for the Oscars only a few days away, Mihai Mălaimare Jr could be a potential Romanian winner for his work as director of photography on Paul Thomas Anderson's The Master. The film is falling away in many Academy Awards predictions, but with the recent awards, The Master could still be a contender for Best Cinematography.

The National Society of Film Critics includes 61 members with voting rights, film critics working for major newspapers in LA, Boston, New York and Chicago, as well as for famous magazines such as The New Yorker, Time and Newsweek. The 2012 prize list includes Daniel Day-Lewis  as Best Actor in Lincoln, Emmanuelle Riva  as Best Actress in Amour.

Mihai Mălaimare Jr., the son of theater actor and director Mihai Malaimare, previously worked with other international directors, such as Francis Ford Coppola, for the movies Youth without youth and Tetro.

The Master is a 2012 American drama film written, directed, and co-produced by Paul Thomas Anderson and starring Joaquin Phoenix, Philip Seymour Hoffman and Amy Adams. It was produced by Annapurna Pictures and Ghoulardi Film Company, and filming started June 2011, on a EUR 30 million budget.

Mihai Malaimare started taking photos when he was 15 and later went on to filming. He was introduced to Anderson by Francis Ford Coppola with whom he had previously worked.Malaimare recently shot the MTV Video Music Awards campaign, featuring artists such as Eminem, Drake, Kesha and Nikki Minaj. He is also an avid stills photographer.