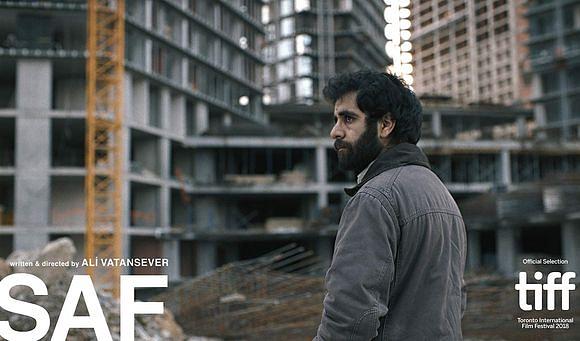 The latest release you can catch in cinemas is in fact a Turkish drama co-produced with Germany and Romania’s 4 Proof Film. Saf is both topical and very moving, and you should make sure not to miss it.

Ali Vatansever’s sophomore feature is set in the Fikirtepe neighbourhood of Istanbul where the locals are driven out of their homes so new luxury apartment blocks can be built. A young couple is struggling to keep their modest home and earn a basic salary, which proves almost impossible in the face of an ever-looming eviction notice and the fact that good-natured husband Kamil cannot find a new job. When a Syrian refugee who operates an excavator at the local construction site breaks his arm, Kamil is offered to replace him during the night shift, but for wages paid to Syrians, meaning below the usual. This not only attracts the hostility of the other workers but also poses Kamil with an even trickier problem: paying for an official permit to operate the machine, otherwise the refugee worker who already blames him for taking his job might return any day. Driven into a corner, Kamil’s actions force his more (seemingly) pragmatic wife Remziye, who struggles herself as a housekeeper for a rich lady, to make her own choices in a dispiriting situation. To say more would give away a major plot twist, but the change of focus from Kamil to Remziye makes the initially subdued film really kick into gear in its second half, when the rhythm becomes more alert and the problems outlined in the first half are tackled full-on.

Saf looks at some of the most urgent contemporary problems: gentrification, displacement, modern slavery, immigration, racism, poverty, and to its great credit avoids pointing fingers or delivering any over-simplified explanations on how these aspects interconnect (although it comes dangerously close to being too on-the-nose at some points). Instead, it looks with perception and empathy at ordinary people faced with less than ordinary circumstances. When two under-privileged groups (the poor local residents and the more desperate refugees who occupy their houses from the moment they are asked to leave them until they are demolished) have to battle each other for survival, there are only bitter gains to be made, but the film does point out the importance of empathy, basic humanity, and following one’s moral principles. And it is this that saves Saf (meaning “innocent” or “pure” in Turkish) from being a completely oppressing experience despite its bleak content.

Interestingly, a third category of the economically dispossessed emerges as both temptation and saving grace for Remziye’s inner struggle, namely people working with no official papers and being more or less imprisoned by their ‘employers’, like the Romanian who takes care of the baby of the woman Remziye works for. The babysitter seems to be available all the time, living in the same flat, with her passport locked away by the lady of the house. She is played by Romanian actress Mihaela Trofimov and here is where the Romanian part of the production is particularly relevant, as this phenomenon has been one of the country’s most pressing problems, i.e, migrant workers abroad, many of them working as caretakers and/or housekeepers in Western countries often without a legal framework.

One other major factor for Saf’s quality is its look, credit to another Romanian addition, director of photography Tudor Vladimir Panduru, whose excellent (international) credits include one of the most beautiful films of the past years, My Happy Family. His fluid camera movement, precise framing and focus, and atmospheric alternation between warm shades of brown and yellow and a cool palette of blue and grey tones elevate the film from a well-written and acted story to a beautiful film with a firm sense of place.

The highest praise, though, goes without a doubt to Ali Vatansever for choosing to tell the stories of those who might not have the chance or resources to tell them themselves, and for doing so with wisdom and warmth.

Saf is currently running in theaters across the country and you can check out the dates and venues here.