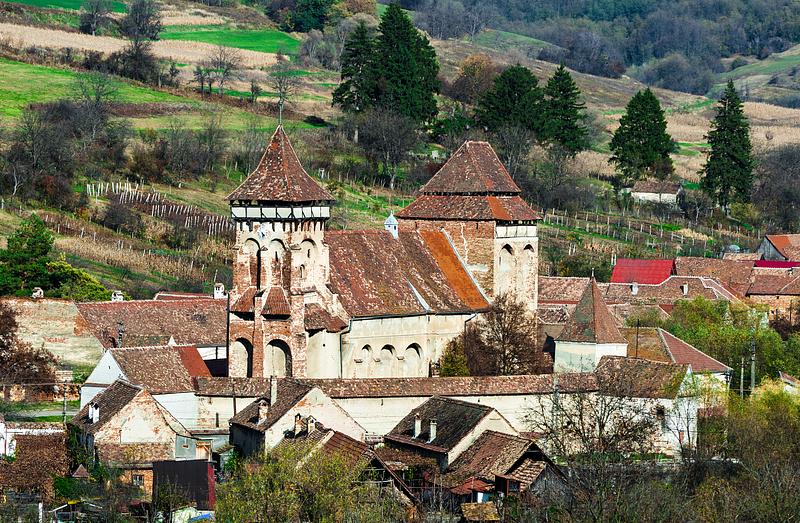 Lesser known than Viscri or Saschiz, the small village of Valea Viilor has a special charm that awaits to be discovered. Founded in the 12th century by German settlers, it is a typical Saxon village, with a main street lined with old houses with massive wooden doors, decorated with local motifs, courtyards shaded by vineyards, and cultivated gardens. An imposing fortified church built more than 700 years ago dominates its landscape, which extends to the hills.

This locality was first mentioned in the 12th century, when the Saxon settlers arrived in the region. In time, Romanians, Saxons, and Székelys lived together in this small village, which was given various names: Wurmloch in German, Baromlaka in Hungarian (beef market), and finally Valea Viilor, the valley of the vineyards, due to the wine-growing importance of the region.

The fortified church stands, imposing, in the center of the settlement. It is the pride of the whole village, with its two big, lateral towers. Originally a small Gothic church dating from the 14th century was found here. Then, around the year 1500, to protect the community against the attacks of the Mongol tribes, the fortification works were started. A fortress was built, surrounding the church with thick walls, 7-meter high, with loopholes, ramparts and spaces to send projectiles against possible attackers.

Today, the 700-year-old church offers shelter to those who are willing to help with repairs and maintenance. Inside, the wooden altar is original, while the Baroque organ was built by a Swiss. A Sunday Mass is held and if you are passing do not hesitate to go there to attend the service.

The village of Valea Viilor is part of the Sibiu Regional Ecomuseum network, which aims to preserve households in their original state. Do not miss the opportunity to visit some of them to see the courtyards and gardens arranged in a traditional way.

Afterwards, you can take a walk on the surrounding hills to see the old vineyards and have a view of the entire place. A network of cart paths and trails linking Valea Viilor to the surrounding villages will give you the freedom to hike, bike or ride.

The original article, in French, is available at lepetitjournal.com.

How to get there: Valea Viilor is located some 50 km north of Sibiu, taking the national road DN14. Buses also connect the town of Mediaş (13 km northeast of the village) to Valea Viilor.