Skip to main content
Politics
Who are the 16 ministers in Romanian PM Ludovic Orban’s team? 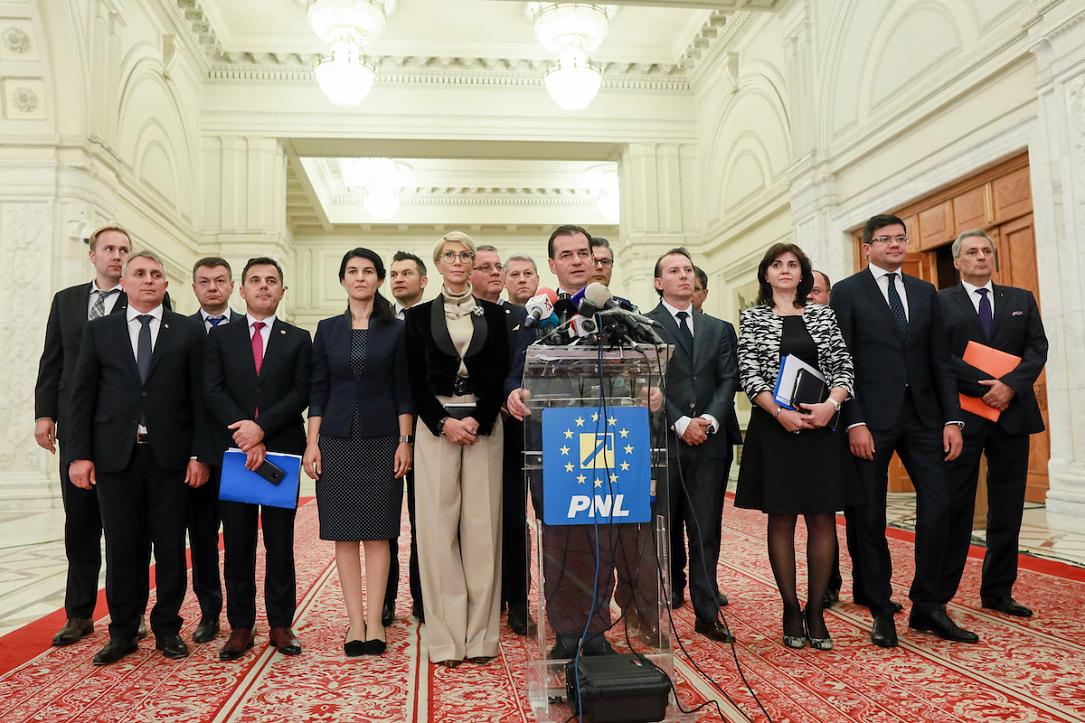 Romania’s prime minister-designate Ludovic Orban has presented to the Parliament a team of 15 ministers and a deputy prime minister without a portfolio. Only three of the 16 members of his team are women. The Orban cabinet includes teachers, economists, engineers, lawyers, and doctors, as well as a career diplomat - Bogdan Aurescu, and a career military man - General Nicolae Ciuca, according to News.ro.

Three of the proposed ministers were endorsed negatively by the Parliament’s specialty committees: Florin Cîţu - Finance, Violeta Alexandru - Labor and Ion Ştefan - Development. However, Ludovic Orban refused to change the nominations for these ministries.

Turcan was born on April 2, 1976, in Botosani. She is married to former presidential advisor Valeriu Turcan and has a child. She studied at the Academy of Economic Studies (ASE), the Faculty of International Economic Relations, and pursued a master's degree in Communication and Public Relations, at SNSPA Bucharest. From 1996 to 1999, Turcan attended the Moscow Pushkin Institute, obtaining a diploma in commercial Russian.

She is an honorary citizen of the State of Nebraska, USA.

Florin Cîţu and has been a member of the Parliament since 2016 and is currently the leader of the liberal senators.

Cîţu was born on April 1, 1972, and earned a bachelor's degree - economics / mathematics, at Grinnell College, Iowa, United States. He pursued a master's degree in applied monetary policy, macroeconomics and econometrics at Iowa State University, USA. He worked as an economist in several banks and was director of Financial Markets at ING Bank Romania, from 2007 to 2011. After that, he worked as a financial consultant.

He has strongly criticized the economic and financial measures taken by the PSD in recent years. Cîţu was negatively endorsed by the parliamentary commissions for the post of finance minister.

Ioan Marcel Boloş was born in Oradea, in 1968. In 1997 he obtained the bachelor's degree, as an economist with a specialization in finance-insurance, at the University of Oradea, as well as an engineer with a specialization in electromechanics. Ioan Marcel Boloş also has a doctorate in accounting, obtained in 2005, at the West University of Timisoara. Since 2015, Boloş has been a doctoral professor at the Department of Accounting Finance at the Faculty of Economic Sciences of the University of Oradea.

According to his resume, he worked as an inspector at Oradea City Hall for four years, until 1997. Until 2012 he held various management positions at Oradea City Hall or Oradea Local Council, and, in 2012, he was appointed State Secretary in the Ministry of Regional Development and Tourism.

In 2013-2017 he worked in the Ministry of Transport, first as general director and then as secretary of state. Since January 2017 he has been the head of the Regional Development Agency North-West (ADR – NV). According to local media, Bolos is not a PNL member, but has close connections to the mayor of Oradea, Ilie Bolojan, a very influential PNL leader.

Virgil Popescu was born in 1968 in Drobeta Turnu Severin. He is currently a member of the Romanian Parliament (since 2016), also holding the position of Vice-Chairman in the Committee on Industries of the Chamber of Deputies.

In the past, he was Secretary of State in the Ministry of Economy, Energy and Business Environment (November 2013 - February 2014). In 2007-2008 he was State Secretary at the Department for Social Dialogue within the Government. Between August 2013 and October 2013, he was vice-president of the National Authority for the Restitution of Properties (ANRP).

Between 1997 and 2001 he was director at Petrom, the PECO Mehedinţi branch.

Ion Stefan is a deputy representing Vrancea, at his first term in the Parliament. Stefan was born on January 22, 1969, he is an electromechanical engineer by profession and owns a retail company.

Ştefan has a house of 910 sqm and was accused by the management of the Focsani City Hall that he did not pay tax for the entire area.

Ion Stefan was endorsed negatively for the position of development minister.

Violeta Alexandru has been a member of the PNL since 2017 and she currently manages the PNL Bucharest branch as interim president.

Violeta Alexandru was born on November 11, 1975. She attended the Faculty of Political Science in Bucharest and has a master's degree in Good Governance. She was a minister for Public Consultation and Civic Dialogue, in the Dacian Cioloş Government and is a founding member of the Institute for Public Policies, which she led as director. In the past, she worked at the Pro Democratia Association, an NGO advocating for civic involvement. She was also a presidential adviser to former president Emil Constantinescu.

Victor Costache is a member of PNL Sibiu. He was born on March 18, 1974 and attended Medicine in Iasi. Later, he specialized in cardiovascular and thoracic surgery. He worked in hospitals in France and Canada and currently runs the Cardiovascular and Thoracic Clinic of the Polisano Hospital in Sibiu.

He was accused of malpractice by the husband of a patient who died, but hasn’t been prosecuted. At parliamentary hearings, Costache said he would resign if he became a suspect. (Read more about the new health minister here).

Costel Alexe was born in 1983 and is currently serving his second term as deputy in Romania’s Parliament. He is also the leader of the PNL Iasi municipal branch.

Alexe attended the courses of the "Alexandru Ioan Cuza" University of Iaşi - Faculty of Geography and Geodesy, the specialty of Physical Geography. According to the resume posted on the Chamber of Deputies website, Costel Alexe is a doctor in climatology and meteorology. Costel Alexe also enrolled in 2012 at the Faculty of Law of the "Petre Andrei" University in Iasi.

Prior to being elected MP, Alexe worked as an interview operator at several public opinion polling institutes. Between October 2007 - June 2012, he was a counselor at the Legal Service and Public Relations within the Cadaster and Real Estate Advertising Office in Iasi.

Monica Anisie is the president of the PNL organization in Bucharest’s District 2. She is 46 years old and is a Romanian language teacher at a college in Bucharest.

Anisie has held several management positions in the Ministry of Education, has been presidential adviser on education issues, has headed the School Inspection Directorate and has been deputy general school inspector of the Bucharest School Inspectorate.

Bogdan Gheorghiu was born in 1975. He attended the courses of the Ecological University of Bucharest - the Faculty of Arts - Acting, and received his bachelor’s degree from the "George Enescu" University of Arts in Iasi at the Acting Faculty. Gheorghiu also laid the foundations of the "Bucovina" Dramatic Theater.

Gheorghiu also worked as a producer of television and radio shows and managed a radio station in the city of Rădăuţi, Northern Romania. In 2002, he opened the local TV station OTV Suceava, and in 2005 he set up the TV station Rădăuţi, where he was later manager. In 2007 he opened the regional television station Bucovina TV, where he was also a producer, and program manager.

In 2016, he was deputy in the Romanian Parliament, on the PNL Suceava lists. He is currently a member of the Committee on Culture, Arts, and Media of the Chamber of Deputies.

Ionut Stroe was born on September 23, 1979. He attended the courses of the Faculty of Automation, Computers and Electronics, at the University of Craiova, becoming an IT engineer, but also the Faculty of Law at the same university. A Master of Finance and Business Administration followed, as well as a Master of Human Rights.

He was director of the Dolj County Youth and Sport Directorate, and director of the Youth Recreation and Entertainment Programs Directorate of the National Youth Authority. Between 2004 and 2008 he was a municipal councilor in Craiova. Stroe is now a deputy in Romania’s Parliament and deputy leader of the PNL group in the Chamber of Deputies.

Ion-Marcel Vela is a senator of Caraş-Severin and secretary of the Senate. Vela has been a PNL member since 1990, and runs the Caraş-Severin branch. He served three mandates asmayor of Caransebeş.

He was born on June 2, 1963, attended the Traian Vuia Polytechnic Institute, Timişoara, the sub-engineer specialization, and the Faculty of Law, at Drăgan European University, Lugoj.

General Nicolae Ciucă is a career military man, born in 1967, in Dolj County. He has participated in numerous missions abroad, in Iraq, Afghanistan and Bosnia. Ciucă led the so-called Red Scorpions in Afghanistan and Iraq.

Nicolae Ciuca has served as the Chief of Staff of the Romanian Army since December 2015, but went into the reserve after agreeing to become a minister. Nicolae Ciuca's mandate at the head of the Army was extended by one year, by decree of president Klaus Iohannis, in December 2018. However, the Defense Ministry attacked the document in court, the magistrates rejecting the complaint.

Bogdan Aurescu (born in 1973) is a career diplomat. He was minister of foreign affairs in the Victor Ponta cabinet, between November 24, 2014 and November 17, 2015. He is now a counselor to president Klaus Iohannis.

Aurescu has been working in Romania’s Ministry of Foreign Affairs since 1996 and is a member of the UN Commission on International Law, the Permanent Court of Arbitration in The Hague, an alternate member of the European Commission for Democracy through Law (Venice Commission) of the Council of Europe.

Bogdan Aurescu is also a university professor in the Department of Public Law of the Faculty of Law, University of Bucharest. He graduated from the Faculties of Law (1996) Merit) and History (1998) at the University of Bucharest, the Franco-Romanian Institute of Business Law and International Cooperation "Nicolae Titulescu - Henri Capitant" (1996) and the National Defense College in Bucharest (2000).