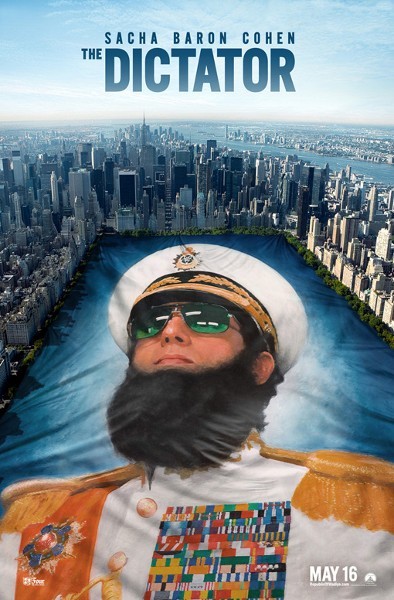 Columnist Eleonore af Schaumburg-Lippe has watched and reviewed the movie 'The Dictator”, which opens in Bucharest cinemas starting this week. The motto of the movie is “Finally suppressed”.

'The Dictator' is a satire that sometimes nails it right on the nose and sometimes goes just too low. However, for anyone who doesn't get easily offended and wants to get a good dose of laughing, it's a must see.

Before watching the movie the Dictator, starring the actor Sacha Baron Cohen, my hopes were high. I must admit I can still burst into laughter just thinking about his first movies 'Ali G' and 'Borat', which I have seen more than once.

I am a fan of Sacha Baron Cohen, I admit that too, and I do like his humor and satire, even though I'm aware that many people don't and do not find either his characters or movies amusing or funny at all.

After watching 'The Dictator' for the first time, I went to the cinema the day after to see the movie again. I wouldn't recommend it. The movie is really funny to watch the first time but the second time it only occasionally raises a smile.

The way the audience responded each time is a good guide to likely responses to the film: either you love it or you hate it. When I saw the movie the first time, the audience seemed to really enjoy it, and everybody was laughing out loud, walking out of the cinema with big smiles on their faces. The second time I saw it, the audience almost all watched the movie in complete silence, and only one person laughed occasionally. He was sitting near me and was obviously getting on his girlfriend’s nerves, who was not laughing at all.

The story itself is not what carries this movie, so I might as well share it. It is sort of a simple story about Sacha Baron Cohen's dictator Aladeen, who runs the fictitious North African state Wadiya. The Dictator Aladeen has it all, a desert palace the size of a Las Vegas hotel, an army of Turquoise Lamborghinis, female bodyguards to see to all his needs, gold covered SUVs. Wadiya's dictator has a penchant for cuddling and pays stars such as Oprah Winfrey and Arnold Schwarzenegger to share his bed. Megan Fox complains that Katy Perry got a better watch and is unwilling to take on her cuddling duties.

The dictator ends up in America, because the UN wants to call for a meeting to find out more about his nuclear weapons plans. In America he is betrayed by his brother Tamir, played by Ben Kingsley, who organizes for Aladeen to be kidnapped, and replaces him with a double.

The real Aladeen survives - without his dictator beard - and has to find a way to get back into power and prevent his brother Tamir turning Wadiya into a democracy. To get access to the meeting, where the papers are to be signed, Aberdeen gets a job in a vegan ecological shop that will cater for the signing, and encounters the shop owner Zoey- played by Anna Faris. He suddenly develops feelings of not wanting to execute her, which, he is told, must mean that he has fallen in love.

Sacha Baron Cohen steps over all political boundaries. Almost everything politically sensitive is joked about. There are jokes about September 11, race jokes, rape jokes, feminist jokes. Sacha Baron Cohen doesn't just step into areas that offend, he positively jumps into them.

During the movie the really heavy satire is in the scene where Aladeen delivers a speech to the UN, where he talks about all the wonderful aspects of a dictatorship by giving examples of US policy.

Not all the punch lines are spot on, but many are, and with a movie like this there will always be comments from both sides, as reactions depend on individual sense of humor. Some will find it hilariously funny and some will hate it.

For me, it is the funniest movie so far this year.