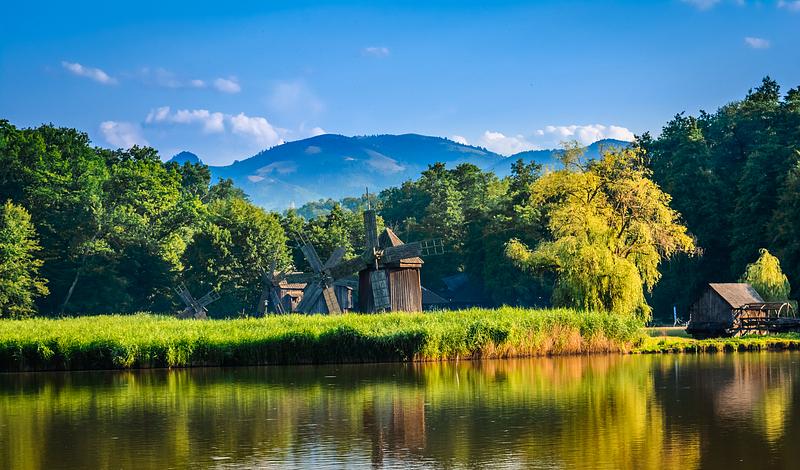 From interesting cities, with a wealth of architecture, history and events to discover, to beautiful nature sites, here are some suggestions for the 2020 travel list.

A city of rich history and many cultural events, Sibiu often finds a spot in local and international travel recommendations and for good reason. Its well preserved Old Town, testimony to its Saxon history, is a joy to discover, with its winding, cobbled streets, eyed rooftops and many museums. The Brukenthal Museum has one of the most impressive art collections in the country, while the History Museum or the Pharmacy Museum, all located within the perimeter of the Old Town, are definitely worth a visit. The Astra Museum Complex, located in the city’s Dumbrava Sibiului Natural Park, is another attraction. The open-air, ethnographic museum received this year’s Luigi Micheletti Award, which recognizes innovative museums in the world of contemporary history, industry and science.

Sibiu is also where many events with an international reach take place. It was a European Capital of Culture in 2007, a European Region of Gastronomy this year, together with the surroundings, and it is getting ready to host in 2021 Eurorando, a pan-European walking event organized every five years by the European Ramblers Association (ERA). The Jazz Festival and the International Theater Festival held in Sibiu are other events that are worth a trip to the city. And if time allows for it, a trip in the area Mărginimea Sibiului offers unspoiled rural charm, quietness and great food. No wonder it has been included among the best destinations for a digital detox.

A city often touted as an example of a successful transformation into a regional IT hub, Cluj has its own share of interesting museums, beautiful parks, Eastern Europe’s coolest café culture and one of the best art bars in Europe. It is also home to some of the country’s largest festivals, such as the Transilvania International Film Festival (TIFF) or the music festival Untold. It is also a destination you can discover and enjoy without having to worry about it being too crowded. Actually, CNN included Cluj Napoca on a list of “20 beautiful European cities with hardly any tourists.” So you will be able to enjoy sites such as the Gothic St. Michael's Church or Fabrica de Pensule at ease. While in town, don’t miss the views of the city from the Cetățuia Hill, and, if you visit at winter, the Christmas Market, selected this year among the most beautiful in Europe.

One of Romania’s oldest cities, Iaşi was the capital of Moldavia for three centuries, from 1564 to 1862. It is a city of beautiful, old parks, impressive buildings and home to the biggest literature festival in the country, FILIT. Among the landmark sites to see in Iaşi is the renovated Palace of Culture, a Neo-Gothic style edifice that hosts four major museums: the Art Museum, Moldavia’s History Museum, the Ethnographic Museum, and Stefan Procopiu Science and Technology Museum. The city’s Botanical Garden is the oldest and largest in the country, spreading on over 80 hectares of land, divided into various sections, including a Rose Garden gathering some 600 varieties of roses. The Copou Park is the city’s oldest public park, dating back to 1834, and is now also a popular destination for literature events, art exhibitions and fairs. It also hosts the Mihai Eminescu Museum, dedicated to Romania’s great Romantic poet, as well as Eminescu's Linden Tree, a centuries-old tree said to have been a favorite of the poet while he lived in Iasi.

The region of the Apuseni Mountains is known for its picturesque landscapes, impressive caves and villages where traditional life goes on largely intact. Some 60 km from Arieseni, in the village of Chiscau (Pietroasa commune), you will find the Bears’ Cave. It has a length of 1.5 km but the part accessible to tourists is only 488 meters. It was 1975 when it was discovered by chance during limestone exploitation works. Traian Curta, one of the village’s miners, was the first one who had the courage to enter and explore the mine, and who got really scared when he discovered the huge bones inside, a real cemetery! Indeed, the name of the cave comes from a species of bear that disappeared 15,000 years ago, the cave bear, Ursus Spelaeus. These gigantic mammals used to retreat to these caves to die.

Another site to see is the Scarisoara cave, home to the second largest underground glacier in Europe, a 4000-year-old natural monument preserved thanks to the air currents and the low temperature which is sometimes close to 0 degrees even in the summer, perfect for cooling off if you took a jacket with you. The entrance is through an impressive chasm from which you have to go down (then back up) 270 steps to enter the cave.

In Romania you can visit the Danube Delta, the second largest river delta in Europe and a place of rich biodiversity or the Văcărești Delta in Bucharest, a part of the city reclaimed by nature. But there is also the Siret Delta, a protected nature area spreading in the counties of Brăila, Galați and Vrancea. Visitors can find here rich vegetation and a variety of birds, mammals and reptiles. Accomomdation options are available at ZagaZaga complex, opened last summer in Doaga village, on the bank of the Siret river. Tourists visiting the resort can rent rowboats or motorboats, go biking through the woods or go fishing. An adventure park and an animal farm are also open.

Sometimes it’s the road that’s important not the destination. The project of Via Transilvanica, a route that will cross Transylvania, is offering hiking enthusiasts the opportunity to experience the beautiful landscapes of the region. The planned 1,000 km trail will link Drobeta-Turnu Severin, a city in Mehedinți, where King Carol I first entered the country, to Putna, in the northeastern part of the country. It is not completed yet but segments of it have been inaugurated, and you can check them here.

Varghis Gorges nature reserve is one of the wildest and most spectacular areas of Transylvania, the ideal place for hiking and caving. Here you can visit the Great Cave from Mereşti, the Horse’s Cave or the Tatars’ Cave (back in old times, in this cave, locals used to find shelter from invaders). These sites abound in stalactites, rock formations, and living creatures who like these dark and cold spaces. The reserve is also home to the largest colonies of bats in the Oriental Carpathians, the yellow peony, a flower protected by law, and a glade full of daffodils. More on this site here.

Şugaş Băi is a small resort at the foot of Baraolt Mountains, in the valley of Şugas stream, in Covasna county.  This region is popular for its mineral water deposits, one of the largest in Europe, with curative properties, its baths and mofettas, and many bears. Over 1,000 bears have been reported living in Covasna county, according to the latest census of the Covasna Environmental Protection Agency.  The entire territory of the Baraolt Mountains is included in the network of Natura 2000 sites and abounds in plants and animal species, some endemic or protected by law. Sporty tourists find here the ideal place for all kinds of outdoor activities. There are two ski slopes, both of medium difficulty, with artificial snow guns, where beginner and intermediate skiers can practice their moves. The network of tourist routes in the Baraolt Mountains includes about 350 km of marked tourist trails. Besides these, there are numerous paths and forest roads that are suitable for mountain biking. More on Sugas Bai here.

The small village of Cund, in Mureș county, is the perfect place to get away from the crowded city, enjoy nature and relax. It is a Saxon village surrounded by beautiful forests, trails, hills and valleys. Valea Verde, a resort set up here by Ulrike and Jonas Schäfer, offers accommodation in houses and apartments spread throughout the village, all in converted Saxon farmhouses. Given the beauty of the surroundings, you might not want to spend that much time indoors though.

The host of the Euro2020, Bucharest has an offer for every tourist: architectural landmarks, laid-back cafes, top museums and a busy arts & culture life. You can visit the famed Palace of Parliament, testimony to the ambition of later dictator Nicolae Ceaușescu, or discover the wealth of Art Deco buildings and neoclassical palaces along the capital’s main boulevards. Among the city’s most interesting museums is the Village Museum, an open-air museum encompassing hundreds of authentic peasant farms and houses from all over Romania. To get up to speed with Romanian art, head to the National Museum of Art of Romania (MNAR), which has collections spanning Old and Modern Romanian art, or to the Museum of Recent Art (MARe). When it is time for a break, you can stop by one of the many cafes, international coffee shop chains but also independent ones, or check some of the city’s beautiful parks.