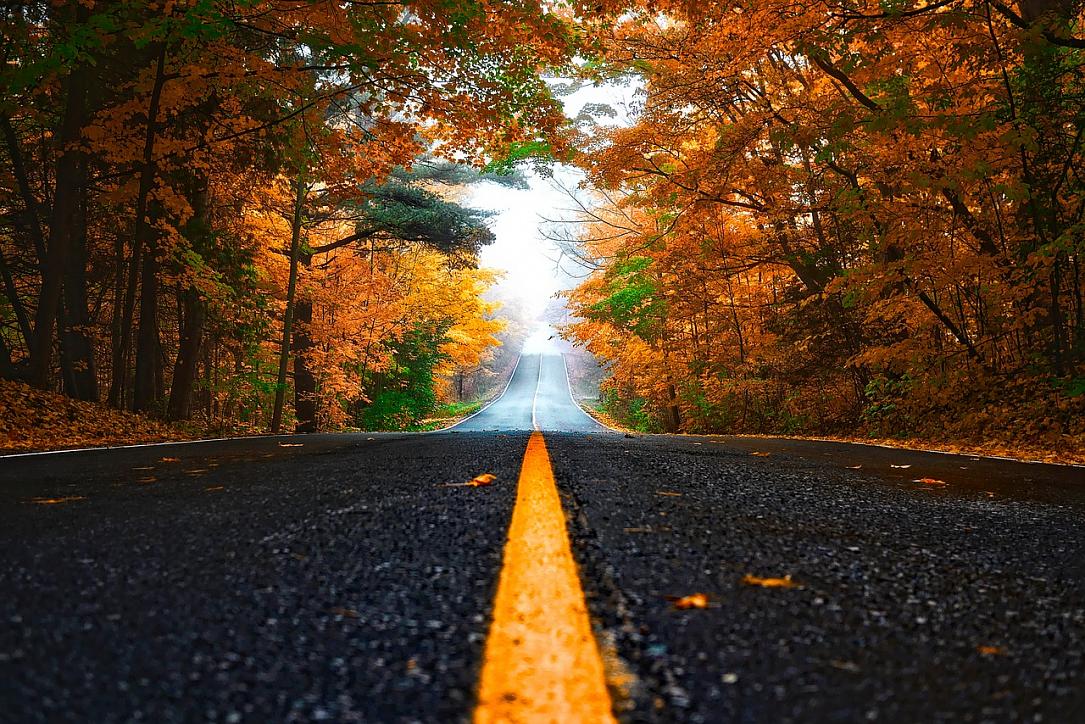 Although autumn is not many people’s favorite season, as its arrival means summer is over, it is the season when nature becomes the most talented artist, using mixes of colors that can turn almost any place into a postcard-worthy destination.

There are many places in Romania worth visiting this season, such as the high-altitude roads that offer spectacular views or the old Dacian capital surrounded by a dense forest dressed in vivid colors in this period.

Admire the landscapes while driving on Romania’s famous mountain roads

The Carpathian Mountains offer some of the most amazing views, especially in autumn when the trees change their colors, offering people the chance to see nature’s amazing mix of colors. In Romania, two high-altitude roads that offer spectacular views and are very popular among both tourists and locals cross the Carptahians, namely the well-known Transfagarasan road and the highest road in Romania – Transalpina. 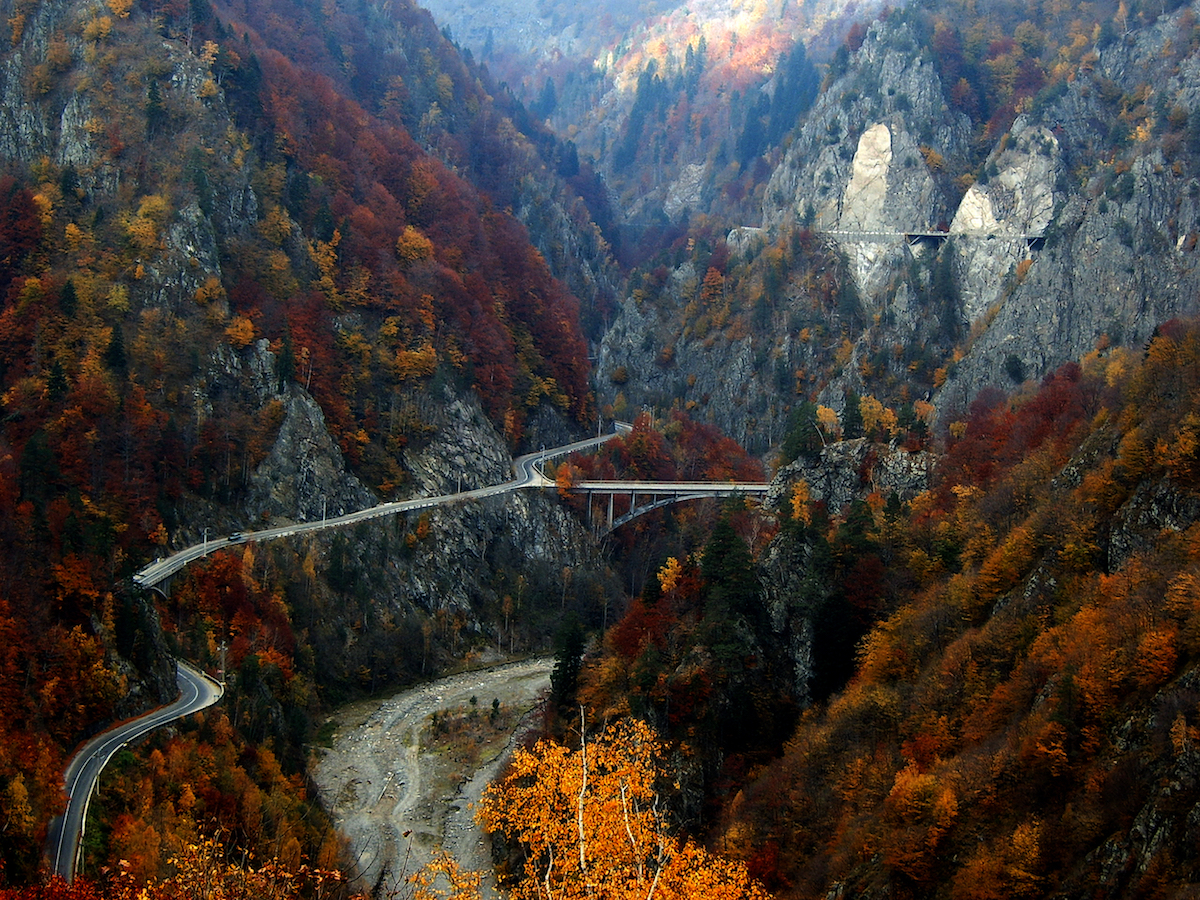 Transfagarasan (DN7C road) is by far the most popular high-altitude road in Romania, but driving on it is always an experience worth trying. And the autumn colors really make it worth the trip! Also, winter arrives faster at the road’s highest point - Balea Lake, giving visitors a chance to see autumn and winter creating fascinating landscapes together.

Transfagarasan is a 90-km long road that connects two of Romania’s historic regions - Transylvania and Wallachia, and was built between 1970 and 1974, during the rule of communist dictator Nicolae Ceausescu. It climbs to an altitude of 2,042 metres, which makes it the second-highest mountain road in Romania, after Transalpina. Back in 2009, the famous British auto show Top Gear shot one of its episodes on Transfagarasan, naming it “the best road in the world”. However, some also call it “The Road to the Sky.”

The road starts near the village of Bascov, in Arges county, and takes drivers between the highest peaks in Romania, Moldoveanu and Negoiu, on a route full of twists and turns that make drivers enjoy every minute of their trip. An important thing to remember is that the road is usually closed from late October until late June because of the snow and bad weather. Another important thing would be to make sure the battery of your smartphone and/or camera is full because you will for sure want to capture every moment of the trip. Also, don’t forget the warm clothes at home.

While in the area, visitors can also make a stop at the Poenari Citadel, a ruined castle known for its connection with Vlad the Impaler, Lake Vidraru, and Capra Waterfall.

Transalpina (DN67C road), the highest mountain road in Romania, reaching an altitude of 2,145 meters, is also worth driving on in autumn. Similar to Transfagarasan, the amazing mix of autumn colors gives this high-altitude road a specific charm. Some even say that Transalpina is more beautiful than Transfagarasan.

It is said that this spectacular road, which some call the King’s Road, was built under King Carol II. It starts from Bengesti-Ciocadia commune in Gorj county and crosses the Parang Mountains from north to south, passing through four counties - Valcea, Gorj, Sibiu and Alba. Ranca, a recently developed mountain resort, is located on this road, and that’s where tourists can also find accommodation.

Due to the high altitudes, Transalpina is also closed during cold months. However, regardless of the season, visitors should always have some warm clothes in their luggage, as it gets windy and cold on the top.

While in the area, tourists can also visit the Polovragi Cave, Oltetului Gorge, or the Icoana and Polovragi monasteries.

From the mountains to the…Danube River 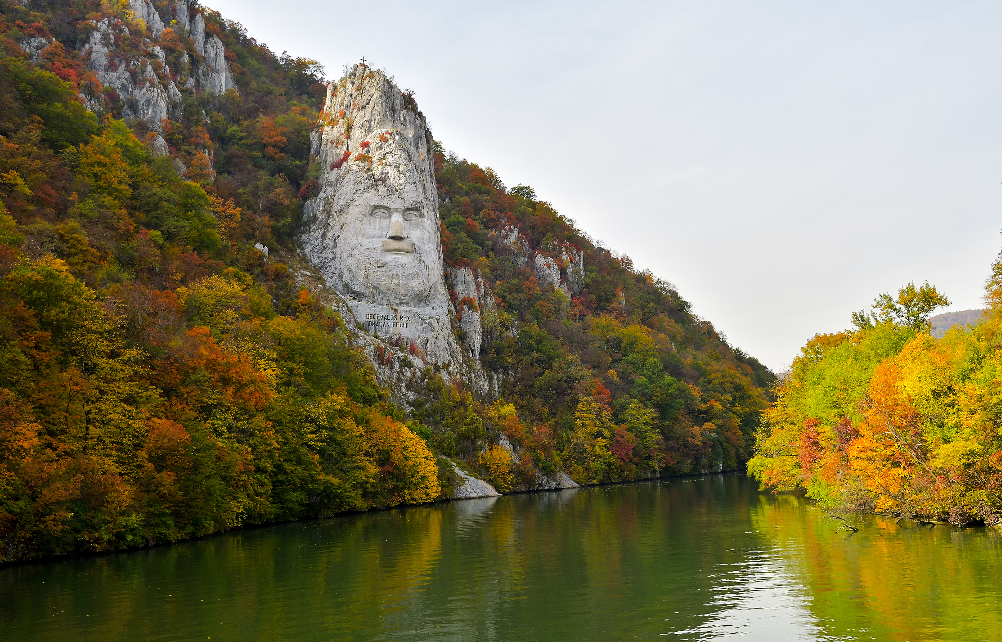 A trip to Cazanele Dunarii is always a great idea. But it’s even more impressive in autumn, when the red, yellow, orange, brown and all the other beautiful colors of the season transform the place into a story-like destination.

Cazanele Dunarii is located in a place where the Danube River crosses the Carpathians, in the Portile de Fier Natural Park. It offers spectacular sights and astonishing views of the river and the Banat black pine forests. Moreover, there are also many tourist objectives that can be reached easily. One of them, which no visitor should miss, is the rock where the portrait of Dacian ruler Decebal is sculpted. Other attractions nearby include the Mraconia Monastery and the Ponicova Cave.

Located at some 16 km from Orsova, in South-Western Romania’s Mehedinti county, Cazanele Dunarii can be reached by car on the DN57 road (a 25-minute trip from Orsova). The closest train station is also the one in the city of Orsova. 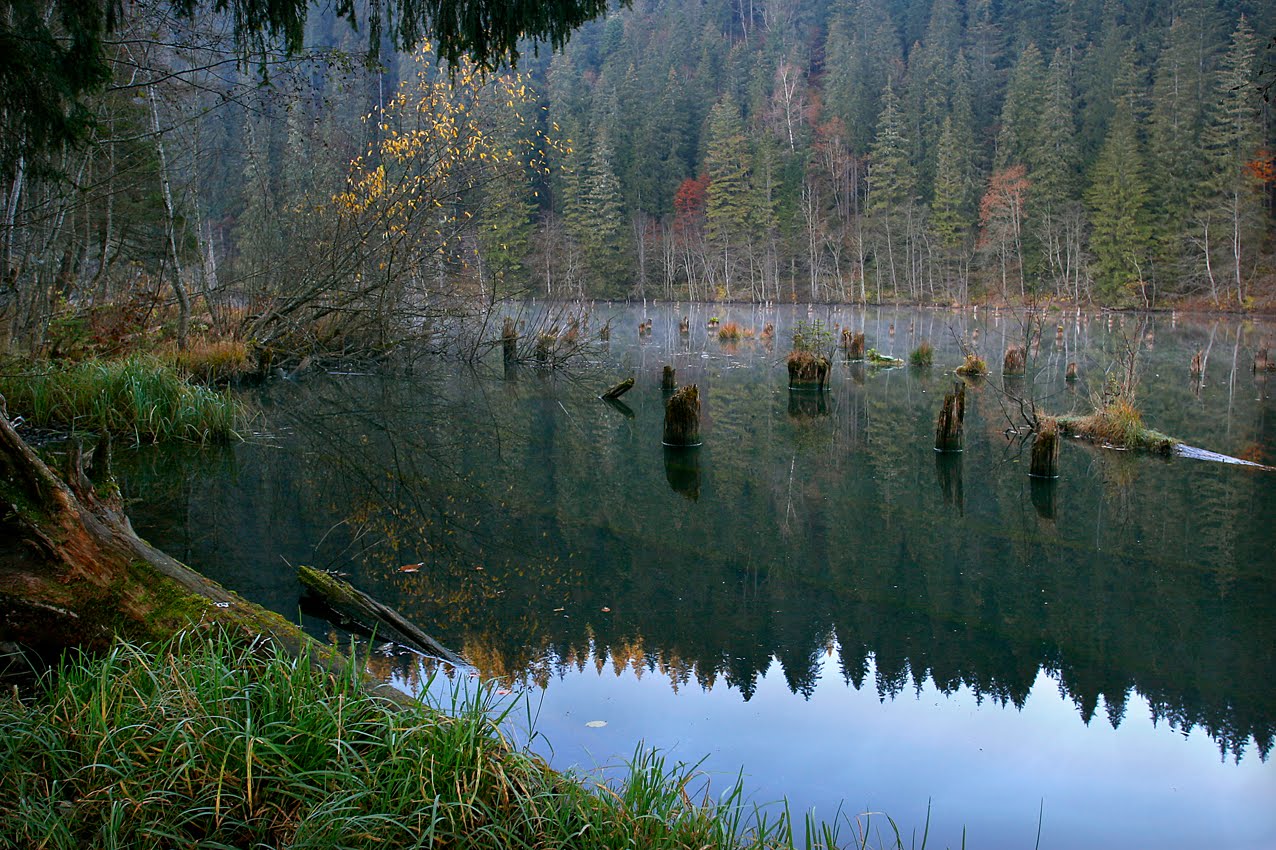 Lacul Rosu (the Red Lake) is a natural lake that was formed in 1837 when a landslide blocked the Bicaz Valley. The trees that were swallowed by the water, which now appear on the lake’s surface, add up to the amazing sights offered by the vivid colors of the season, turning the place into a must-see Romanian destination in the autumn months.

Its name comes from the reddish alluvia deposited in the lake by the Red Creek. It is called Mordersee in German and Gyilkos in Hungarian – which both mean Killer. The legend says the mountain collapse killed shepherds and their flock.

Lacul Rosu is one of the main tourist attractions of Harghita county, covering approximately 12 hectares. The regions of Transylvania and Moldova meet here. It’s located in the Carpathian Mountains, some 27 km from the city of Gheorgheni, on the DN12C road. There is also accommodation available nearby, and a quick search on the Internet can be the best solution to book rooms in advance.

Take a trip back in time at Sarmizegetusa Regia 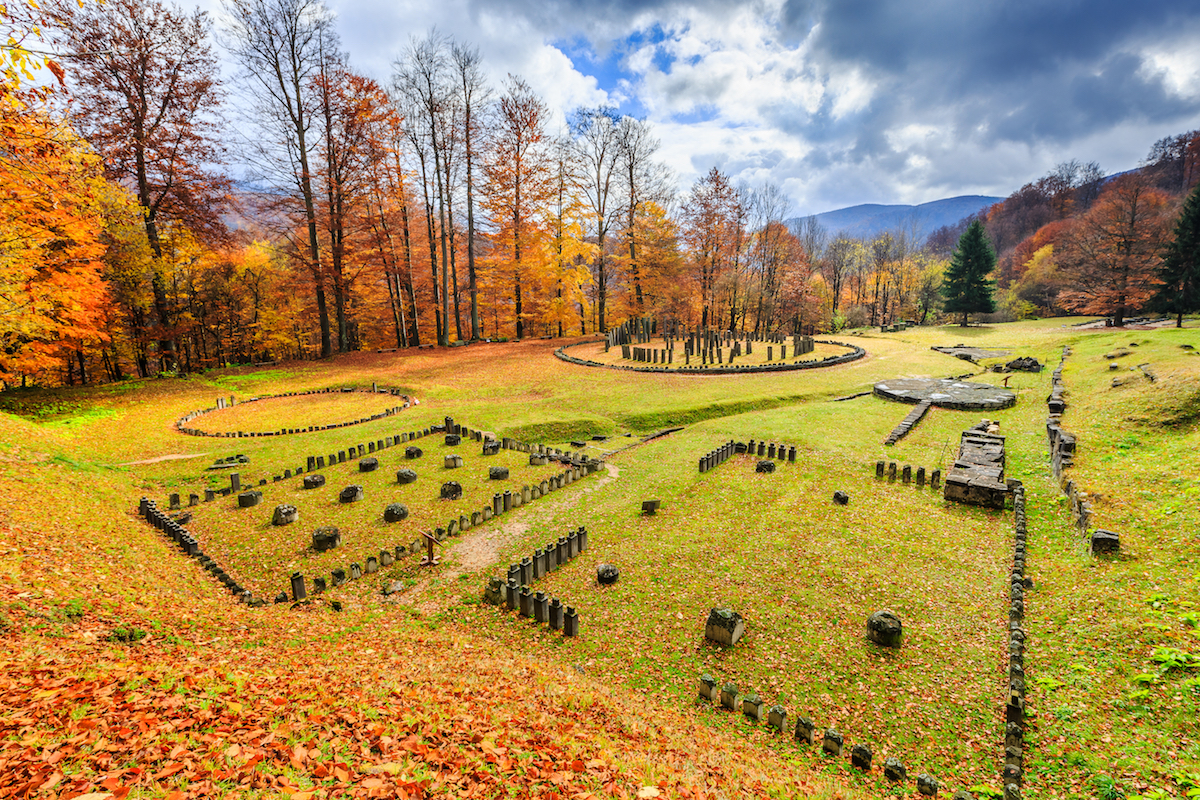 Sarmizegetusa Regia, the former capital of Dacia, is also a great place to add to the list of places to see in autumn. Hidden in the dense forests, the site is filled with history and can be the best choice for a relaxing trip, giving visitors the chance to return home with amazing photos and a great story to tell.

This archeological site was the most important military, religious and political center of the ancient Dacians. The fortress, which was on top of a 1,200-meter high mountain, was the core of the strategic system in the Orastie Mountains (present-day Romania), which comprised six citadels.

Ulpia Traiana Sarmizegetusa, the capital and the largest city of Roman Dacia, is also located nearby and can be added to the list of places to visit. It’s located at about 70 km from Sarmizegetusa Regia.

Letea Forest – the “jungle” of the Danube Delta 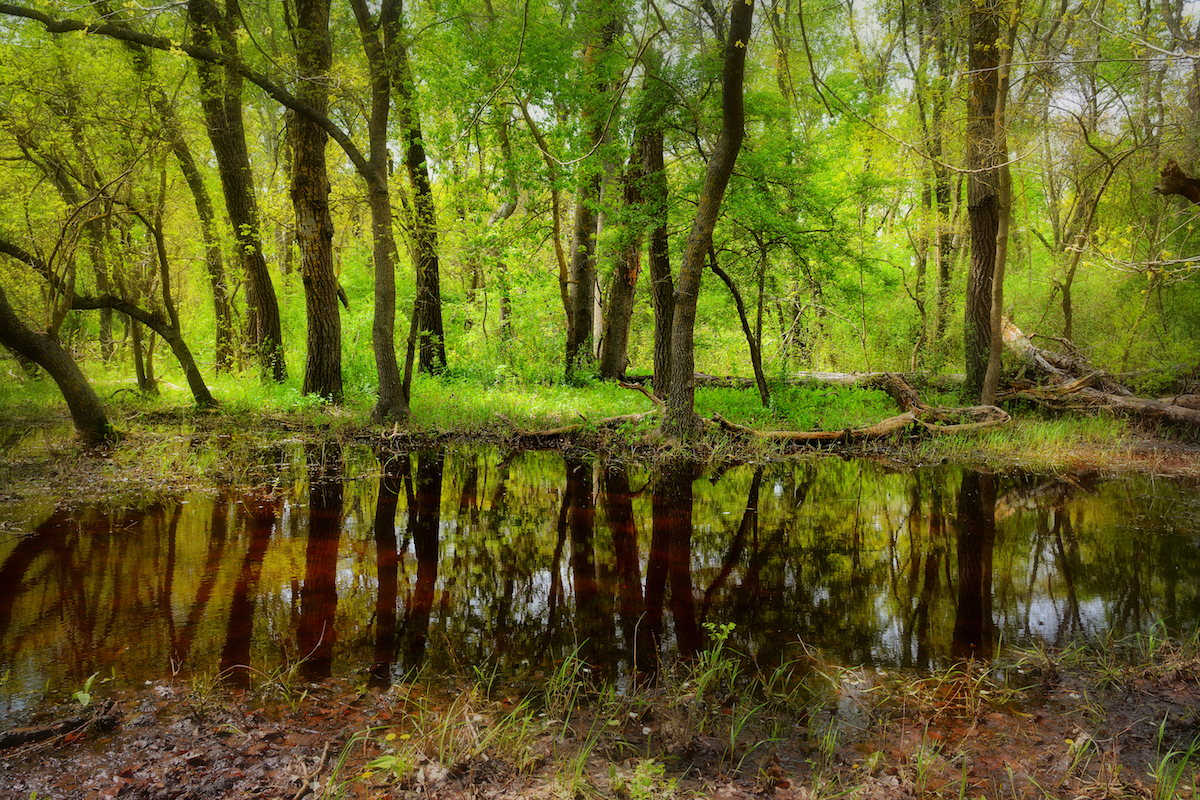 Letea Forest is a spectacular place regardless of season but it turns into a postcard-like place in autumn, when the colors change everything. It is the oldest natural reservation in Romania (since 1938), covering some 2,800 hectares. It’s located between the Sulina and Chilia branches of the Danube River, in the Danube Delta.

Tourists can see a wide range of plants here, such as types of liana, ivy and other climbing plants, and trees such as white and black poplar, elm trees and the English oak. It also has a rich fauna, which includes the white-tailed eagle and the beautiful wild horses. Locals say that thousands of wild horses live in this area.

The forest is located close to the small village of Letea, in Danube Delta, 23 km from Sulina. Tourists can get from Tulcea to Sulina by boat, and then from Sulina to Letea both on water and on land.

Take another day in the Delta to visit the Caraorman Forest 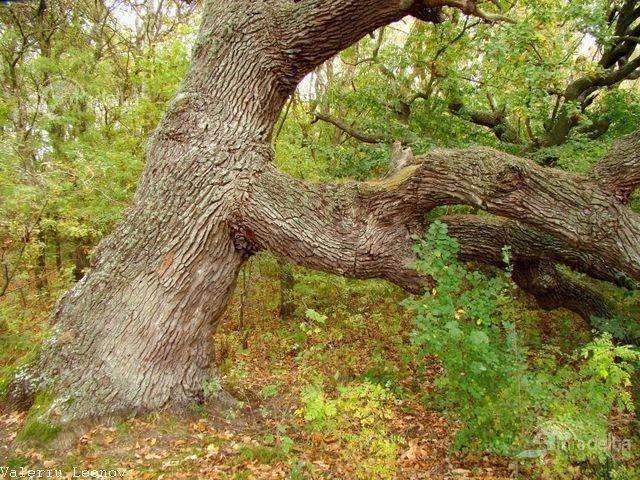 With a landscape similar to the one of the Letea Forest, the Caraorman Forest is home to secular oaks that are over 30 m tall, ash trees, poplars, and various types of climbing plants. The largest oak in the Danube Delta is also located in this forest – a 400-year-old and 4-meter-long oak tree called the "kneeling oak" because its braches touch the ground.

Caraorman is located not far from to the Letea Forest and can be reached by boat.

Discover the autumn charm of the oldest forest in Romania 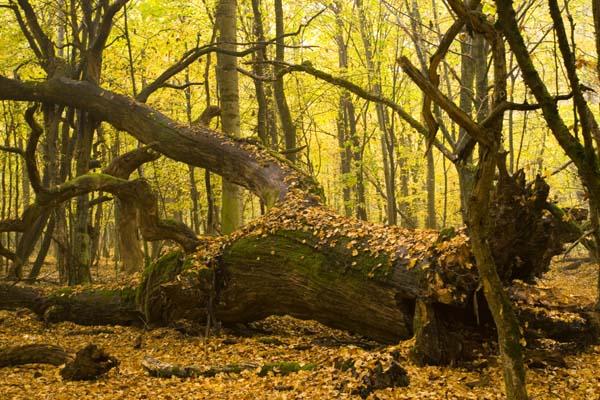 Located in Transylvania, the Mociar Forest is the oldest forest in Romania. Spreading over some 570 hectares, it is home to hundreds of secular trees, which, in addition to looking like they were just taken out of a story, create spectacular images in autumn. The forest was declared forest natural reservation in the year 1932, to safeguard the secular oaks.

The Mociar Forest is situated in Mures county, close to the city of Reghin, at an altitude of 400 m. The spa resort Sovata is also located nearby, at some 37 km from the Mociar Forest. To get to the forest, take the DJ153 road from Reghin or from Sovata.

The Bogatii Forest is a nature reserve located in the Persani Mountains in Brasov county, central Romania. It is one of the most important deciduous forests in the country, being mainly composed of European beech trees, sessile oaks, and alder trees. The trees’ leaves get amazing mixes of colors in autumn, this forest being a perfect choice for a relaxing trip.

The forest is located at some 45 km from Brasov, on the DN13 road.