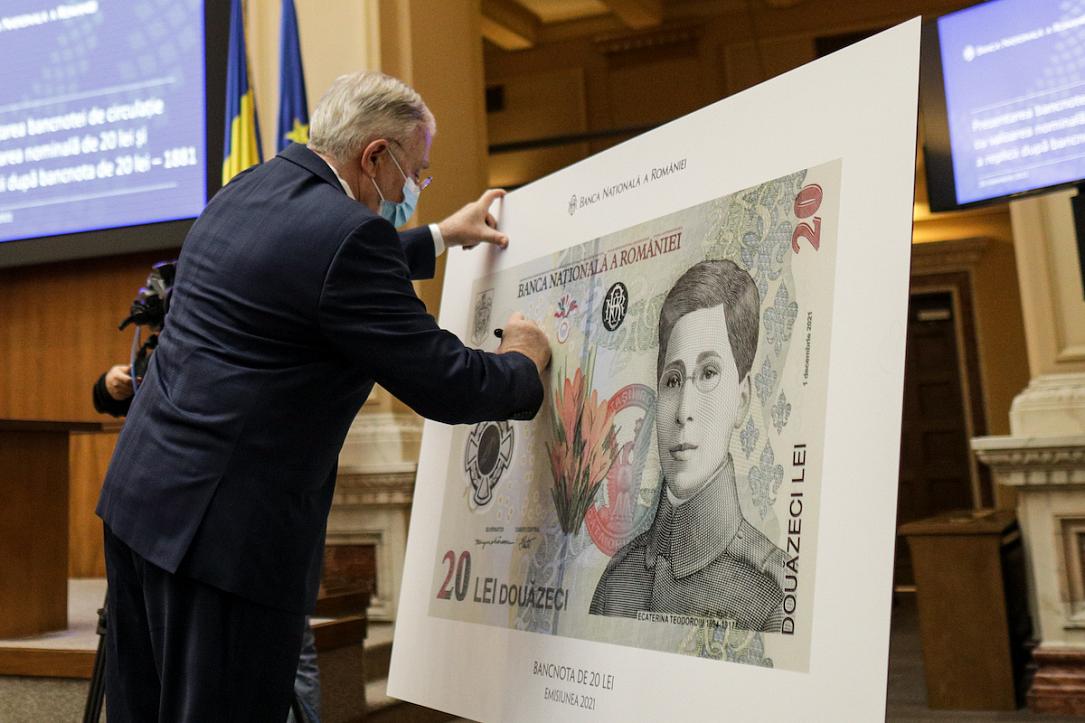 A new RON 20 banknote featuring the portrait of Ecaterina Teodoroiu, a heroine of Romania who fought and died in World War I (WWI), will be put into circulation on December 1, when the country celebrates its national day.

The new banknote, which is the first in Romania to feature a female personality, “helps strengthen gender equality and the major role of female personalities in Romanian history and society,” the National Bank (BNR) said in a press release.

The RON 20 note is made of polymer with a mix of flat and raised printing techniques. It is 136 x 77 mm in size, and its predominant colour is olive green.

The portrait of Ecaterina Teodoroiu, her birth and death years (1894-1917), a floral element depicting a bouquet of crocus flowers (Crocus flavus), appear on one side of the new banknote. In the background, the central area features a badge of the Romanian Scouts. Other elements include the value of the note, “20 LEI DOUĂZECI” printed horizontally, the signatures of the Governor and the Chief Cashier, the coat of arms of Romania, the name of the issuing central bank, a stylised depiction of the infantry insignia, the BNR logo in a medallion, and, on the right, vertically, the face value in letters “DOUĂZECI LEI”, the circulation date “1 decembrie 2021,” and the face value in figures “20.”

The reverse of the banknote features a depiction of the winged figure of Victory on the Victory Medal, an image of the Mărășești Mausoleum and behind the Mausoleum, a lily flower. This side also includes the face value in letters and figures, the name of the issuing central bank, the BNR logo printed at the top right and bottom left in a rectangle, the warning that forgery is punished according to the law, and the serial number.

To protect against forgery, the banknote also includes a series of security features, some for the public, others traceable only when using special equipment, intended for employees in the banking system, BNR explained.

According to the Central Bank, the new RON 20 banknote will be put into circulation through the regional branches of BNR in Bucharest, Cluj-Napoca, Constanța, Craiova, Iași and Timișoara, when making cash payments to credit institutions/the State Treasury.

Born in the village of Vadeni (nowadays a neighbourhood of the city of Targu Jiu) in 1894, Ecaterina Teodoroiu wanted to become a teacher, but the Romanian Kingdom entered World War I on the Allied side, and she started working as a nurse. Later, after the death of her brother Nicolae, who died on the front, she replaced him and became a soldier. It was an unusual decision for a woman at the time, but she proved her worthiness as a soldier. She died fighting during the battles in Marasesti, being hit by a machine gun.