"Destination: Bucharest" - A visit to the Parliament Palace 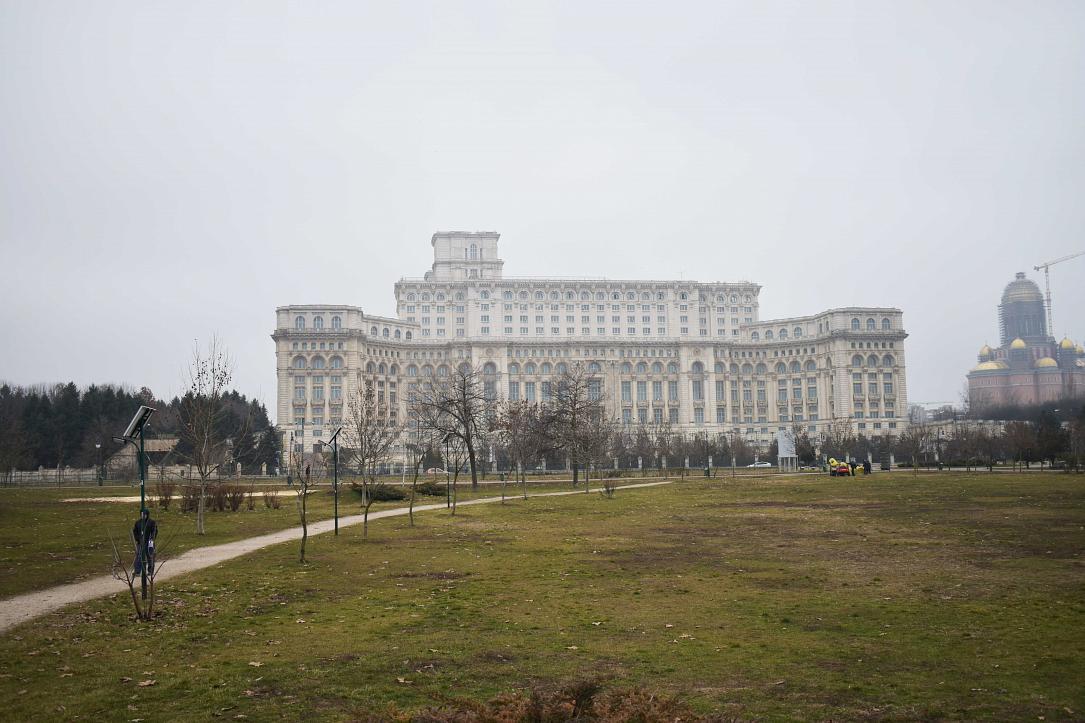 More than 35 years ago, the Capital saw the start of the construction works at the building that would change its look forever. We go on a tour of what is today the Palace of the Parliament and discover part of the history of one of the largest administrative buildings in the world.

Getting out of the Izvor subway station, we encounter the sight of the park that goes by the same name.  The immense Palace of the Parliament stands tall in the background, next to the silhouette of the People’s Redemption Cathedral.

In the past, this is where the Uranus neighborhood, demolished to make way for the construction, would have stood. The neighborhood, a picturesque one, with sloping streets, lined with old Romanian houses, with generous gardens, and preserved the feel of the Bucharest at the beginning of the 20th century, made room in the 80s on the Arsenal Hill for the new Parliament Palace.

We try to imagine what we would have seen instead of today’s massive architectural presence, cross the park and get close to the visitors’ entrance. On the way, we meet two groups taking photos with the building in the background: a family and some high school students. Once inside the hallway from where the guide will meet us, we find around 30 – 40 people sitting at the cafeteria – couples, families with children, youngsters – waiting for their tour to begin. Among bits and pieces of conversation we can hear Italian, French, Spanish, and, of course, English. We are sent to pay for the entrance tickets inside the souvenir store, also in the hallway. Among the many exhibited products, we discover many items (mugs, magnets, t-shirts) inscribed with or in the shape of the Parliament Palace, but also the traditional Romanian blouse ia or drawings, one of them depicting ruler Vlad Țepeș.

We go through the security filter and start the tour with a brief reminder of the human effort of those who worked on building the People’s House, today named the Parliament Palace: over 100,000 people, with almost 20,000 working in three shifts, 24 hours a day, at the height of the works. At the same time, soldiers also took part in erecting the building: some 12,000 between 1984 and 1990.

The tour unveils many numbers, dimensions and proportions meant to reveal the resources and effort that went into erecting the building: the height of the rooms, the size of the curtains, the weight of the lighting fixtures or the surface of the rugs, many of them made by the stitching together of several parts as they were impossible to weave in one piece.

We enter a hallway with a cold light, where we find the busts of several Romanian rulers, and get a first sense of the building’s size. We stop at the C. A. Rosetti Hall, designed to be a performance hall. As it does not have a backstage area, it wasn’t used for concerts or performances but as a conference hall. It has a capacity of 600 seats and is designed with elements of the Cubist and Art-Deco styles. The huge chandelier, made of Mediaș crystals and the largest in the building, immediately catches our eye.

We walk through a long hall and find the Press Gallery, where the cabins of several media institutions can be found, closed. Also here, several traditional folk costumes are exhibited on mannequins, in individual cases. The guide points out the paintings on the walls and we discover several works by Sabin Bălașa, the favorite painter of Nicolae Ceaușescu.

We then stop at the Nicolae Iorga Hall, arranged as if it was about to receive the participants to an event. The guide asks us if the décor seems at all familiar. Hard to say, given the size of the room, but we are invited to pay attention to the presence of the wood in the design of the hall, which was inspired by the style of the Peleș Castle. We also find out that this is where a NATO meeting was held in 1995 and that today the hall is used for various conferences.

Afterward, we walk through the Honorary Gallery and the official entrance hallway. The corridor is 150 meters long, and is equipped with sliding oak doors, that separate it into several sections. There are 14 windows and window-gates allowing natural light to pass through and over 50 lighting fixtures. The gallery is supported by 35 white marble columns and pink marble was also used in the decoration. The monumental stairs are also impressive, and a few young couples visiting turn them into the perfect décor for several photos.

We stop by the Ion I.C. Brătianu Hall, also used for conferences. Initially, the counties of the country should have been reflected in the decoration of the hall, hence its first name of Provinces Hall. It did not happen and the hall is named today after the former Liberal prime minister.

We reach the Take Ionescu Hall, endowed with 12 chandeliers and several lamps made of Mediaș crystal. The doors are ornately sculpted and the ceiling was designed in such a way as to allow the air to circulate naturally. On one side, we see the rolled carpet – the hall is also used for various events and fairs and the carpet isn’t always laid out.

From here, we reach the largest room from those we visit – Unirii Hall, which has a surface of 2,226 meters. It was designed as a room for celebrations, something reflected in the sumptuous design, with Rușchița marble floors and columns and a richly decorated skylight. The hall opens to the park through several window-gates that are 8 meters tall.

The guide allows us to take our time for photos and to admire the hall. The size is impressive and the logistics of its maintenance as well. Cleaning machines similar to those used in supermarkets are used and changing the lightbulbs is a laborious operation.

One of the tour participants recalls that, during his youth, he came very close to being recruited to work on the construction of the building. An intervention to a superior helped him not to be detached at the construction site. He is from Alba Iulia and is in Bucharest for a short visit, at the edifice where he did not wish to work. Another tour participant gives the example of his uncle, who was sent to work on the construction of the subway galleries while he was doing his military service. The memory of the period of Ceaușescu’s dictatorship, not that far away, returns as a warning that today’s tourist experience meant many human sacrifices and personal dramas.

The last hall we visit is A.I. Cuza, finished before 1989. It is also of an impressive size, of over 1,800 sqm. The décor is also sumptuous, and the ceiling is elaborately designed, with seven skylights and many decorative elements. In 1995, this hall hosted the opening concert of the George Enescu International Festival, conducted by Yehudi Menuhin. The hall has a balcony facing Constituției Square and Unirii Boulevard, which was meant to be an answer to the more famous Champs Elysees. The terrace is not accessible for visiting but the guide reminds us that it was the place from where Michael Jackson greeted his Bucharest fans.

Before we part, the guide draws our attention to a decorative motif on the floor, frequently encountered inside the building. It is a stylized reproduction of the shape of the Parliament Palace. We are shown what side we are on, what was the route we undertook, plus several numbers that give us an idea of the giant building we have been walking around for an hour: we walked 1.5 km, climbed some 200 steps and covered only 4% of the building’s surface.

A virtual tour of the Parliament is also available at Google Arts & Culture.

In order to visit the building, the visit needs to be scheduled by phone, one day before. It is important to have an ID with you – it will be scanned at the security filter. Driving licenses or other types of identification are not accepted. More details about available tours here: http://cic.cdep.ro/ro/vizitare/programe-si-tarife-de-vizitare. Tickets can be paid both in cash and with the card.

The entrance for visitors is 2-4 Izvor St. 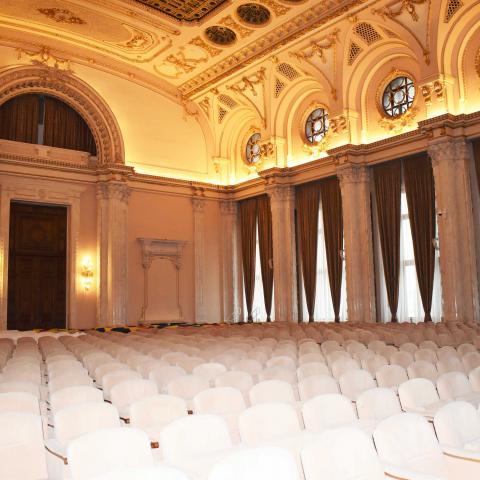 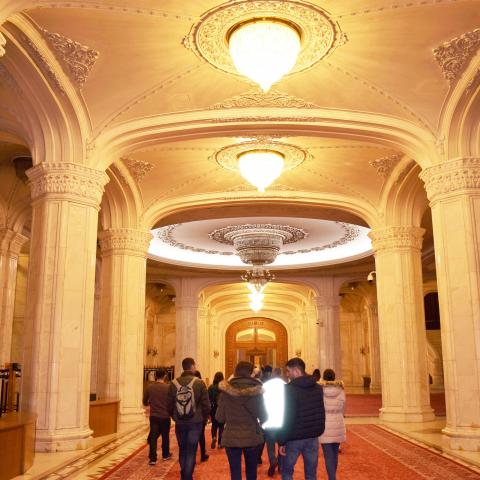 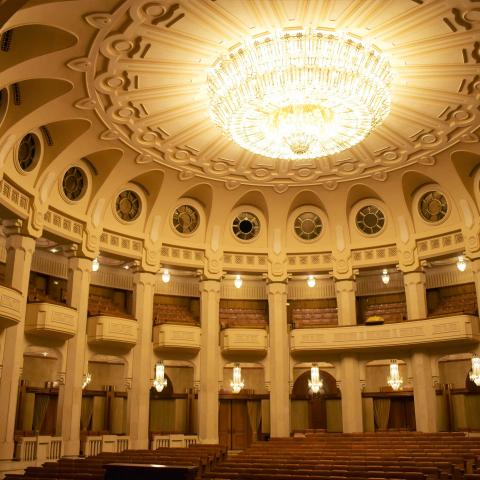 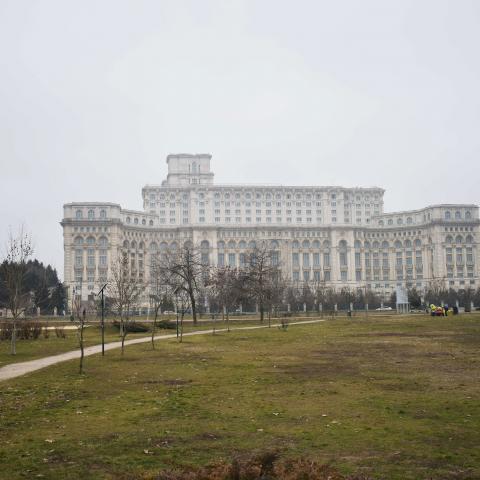 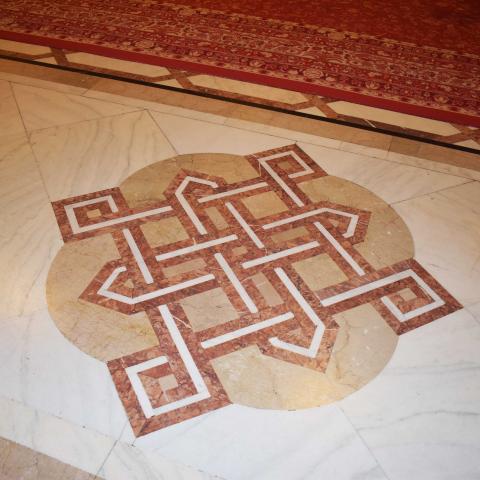 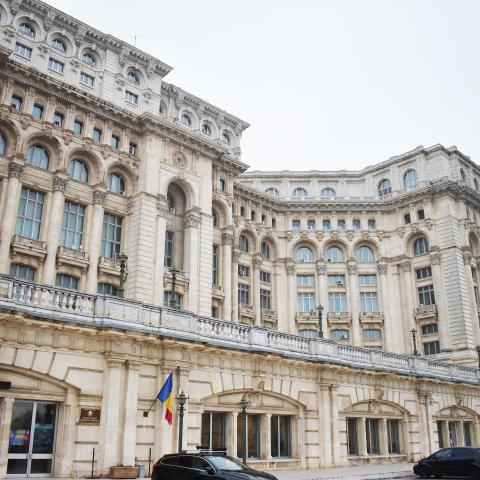 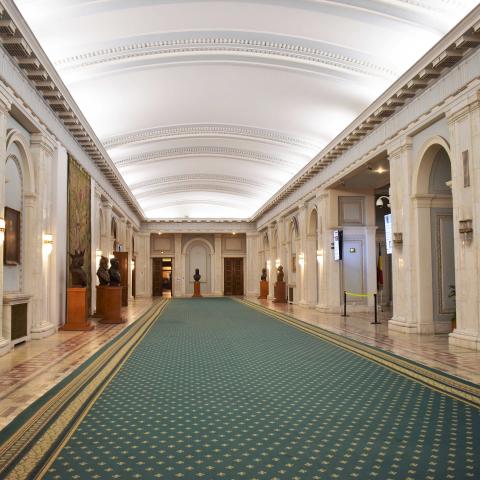 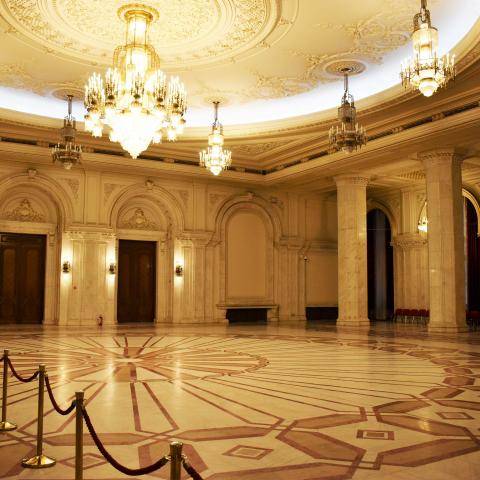