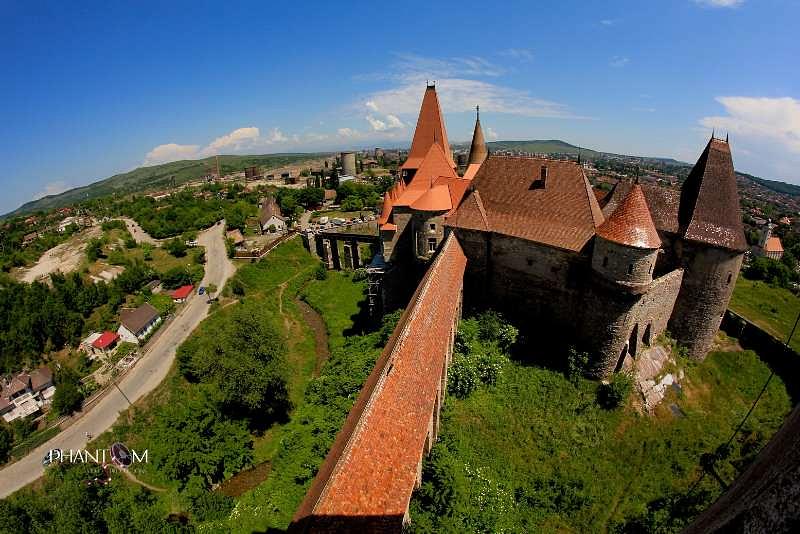 I have always wanted to visit Hunedoara to see Corvin Castle after seeing photos posted by my friends on various social media from time to time. I finally got the opportunity recently and, as is often the case when you anticipate something so enthusiastically, it wasn’t quite what I expected.

Looking at my friends photos and the obvious joy they displayed while standing on the wooden bridge that spans the wide moat, leading up to the very gothic towers and of the main entrance, I assumed a unified building, a castle from a clearly defined period. Furthermore, I gave no thought whatsoever to the town of Hunedoara itself. I was only interested in the castle, I like castles.

As it turns out I made a mistake on both counts.

The castle is what could be described as a potage, a strange mixture of styles created by different people at different times all of them interesting and quite spectacular in their own right but here combined into an unusual and barely-fitting confusion.

The castle was first built by Transylvanian prince John Hunyadi (Iancu Corvin de Hunedoara) in the 15th century, intended as a castle to contribute to the defence of Christian Europe against Ottoman expansion. Here is where the early medieval gothic headlines come from, the large high towers, the imposing walls and battlements and, inside, the stone vaulted ceilings similar to the ones to be found across Europe in Notre Dame and Roslyn Chapel for example. This is what I wanted and expected.

Then I was forced to accept that bits and pieces had been added on by other, later owners in the 17th and 19th centuries who brought builders and artists from renaissance and then kitsch Europe to dilute the intimidating facades of the original castle. They wanted a baronial home with softer fairyland towers, balconies and decorated windows. Instead of high vaulted ceilings they installed wood beams and other unexciting finery and changed the general character of the building, adding a little touch of Neuschwanstein to the project.

However, the later Hunyadi’s could do nothing to ruin perhaps the castle’s most interesting legend. John Hunyadi made a deal with two Ottoman prisoners captured in battle. He agreed to free them in return for their digging the castle well. So they worked for 15 years digging deep down into the base of the castle, eventually finding water. However, during the period of their labour John Hunyadi died and when they went to the lady, John’s wife, to receive their freedom, she refused them as she had not made the original deal. Thus, modern corporate culture was born.

There is an inscription on the stone work of the tower next to the well, in Arabic, saying something like, ‘You have water but no soul’.

Standing on the castle ramparts you are faced with a number of derelict and rusting factories and your immediate thoughts inevitably are, ‘what a shame that this beautiful site is ruined by these rotting hulks from the communist past’. However, in fact, thinking about the various periods of the area’s history set out before you, you realize and accept that rotting factories are just as entitled to their place in history as the seemingly glorious castle.

We should be just as impressed by the unemployed cranes and assembly sheds, whether communist or post Austro-Hungarian, and the people who worked in them as we are by the vaulted medieval ceilings and the lords and ladies in the castle itself. In fact when we discover that the steel for the construction of the Eiffel Tower was forged in the nearby town of Resita our understanding of the area’s history and of history itself changes and we realize that we must respect and be equally impressed by the many layers on which it is built.

History is not all about castles and in fact we should be prepared to consider its many layers, just as we look at the layers of a fabulous lasagna.

Castles in Romania that take visitors back in time

Travel planner: Hunedoara’s “fairy tale” castle is worth the trek or detour