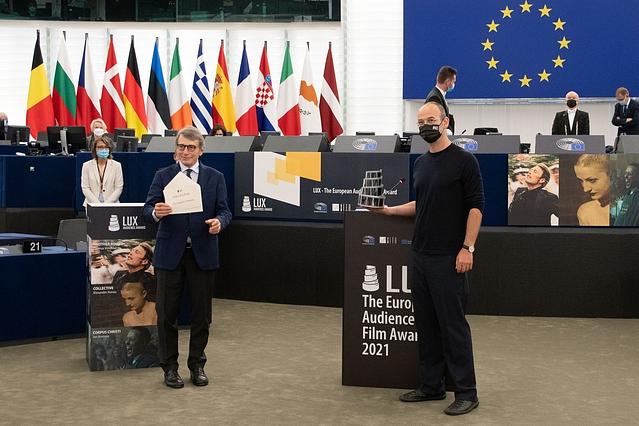 Alexander Nanau'sNanau's documentary Collective, about the journalistic investigation that followed the fire at Colectiv club in Bucharest in October 2015, won the 2021 LUX Audience Award.

It competed with Thomas Vinterberg's Another Round and Jan Komasa's Corpus Christi for the title.

The documentary has won a host of accolades since it premiered at the Venice Film Festival in 2019, including the European Documentary prize at the 2020 European Film Awards. It was also the first Romanian film to be nominated for the Oscars.

After the three nominated titles were announced in December of last year, European audiences and the members of the European Parliament had the chance to vote for their favorite films. Collective emerged as the title with the highest average rating from the public and the MEPs, with each group weighing 50 percent.

"I think this is an award for the victims and their families, for whom justice has still not been served in Romania. This is also an award for the resilience and the courage of normal citizens that came out, told the truth and changed Romanian society. Europe is watching now. Societies do not evolve if we do not have culture, education and a free press," Nanau said upon receiving the prize.

Another of Nanau's documentaries, Toto and His Sisters, was part of the LUX Prize Official Selection in 2015.

"Collective shows how important investigative journalism is for freedom. The tragedy of the nightclub in Bucharest in 2015 shocked the whole of Europe, and the team of journalists who investigated the case showed a commitment to freedom of information," David Maria Sassoli, the president of the European Parliament, said.

The LUX Audience Award is built on the LUX Prize, the film prize of the European Parliament established in 2007, and on the EFA's People's Choice Award, introduced in 1997. The selected films "raise awareness about current social and political issues, and they reflect the beauty and diversity of European cinema."