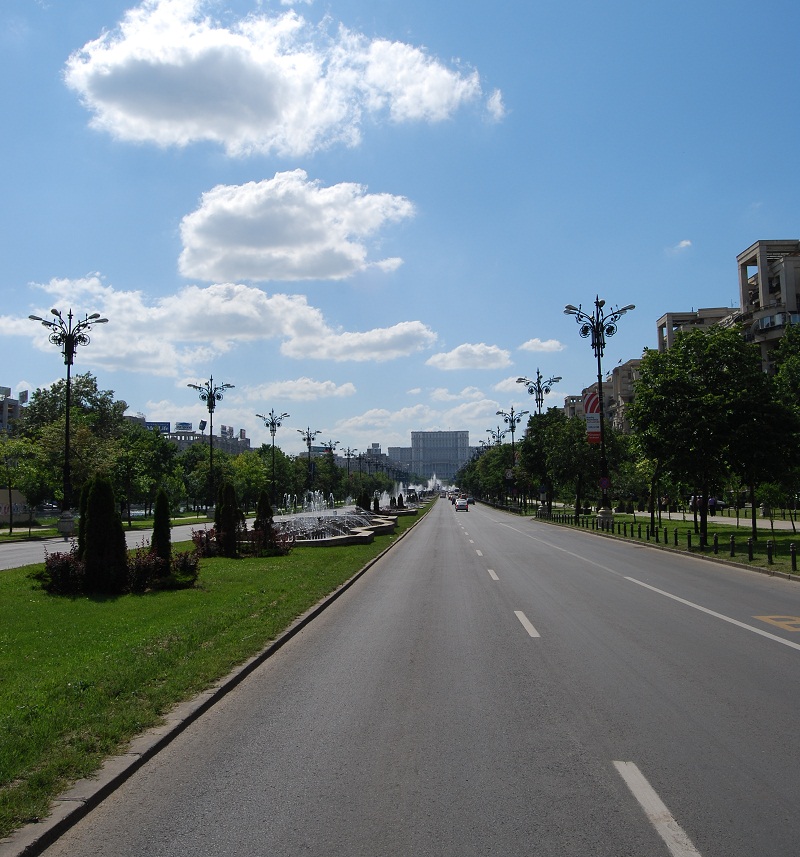 New to Bucharest? Bit lost? As per the front cover of the Hitch-hiker's Guide to the Galaxy, don't panic. There are far more difficult places for the expatriate to adjust to than Bucharest. It's been a good six years since I was in Romania and I have to admit it's good to be back. I like Bucharest. When I say this to locals, I'm usually met with dumbfounded looks of disbelief. But it's true, although I do understand the reaction. I can be fairly negative about the north of England, where I grew up.

So, how to survive in Bucharest? The first piece of advice I'd offer anyone arriving at Baneasa airport is never, ever take one of the taxis outside the terminal building. Although there's nothing here like the South American 'seguestro express' (express kidnapping by taxi), seemingly all the taxis at Baneasa airport charge at least ten times the going rate. Otopeni has some rip-off taxis, but not exclusively so. The easiest thing is to walk a hundred meters down the road and flag a taxi down. Or get the bus. There's no metro line (yet) from the airport to downtown Bucharest, but they are working on it.

There's plenty to do in Bucharest, the Lipscani old town area has gone from being a crumbling district of derelict buildings to the thriving heart of Bucharest nightlife in the space of a few years. Although some, myself included, miss Lipscani's former dilapidated charm, there is undeniably a wider choice of places to eat or go out and much of the nightlife is now conveniently concentrated in one place. Nowadays there are plenty expatriates living in Bucharest, some of the bars and nightclubs are popular haunts for foreign nationals and locals alike. English is very widely spoken in Bucharest, particularly downtown, which is obviously very helpful, but at the same time it does create a disincentive to learning Romanian. This is a shame, it's quite possible to survive here without learning the lingo, but it does limit a visitor's experience of the country.

It's definitely worth finding out about what's going on in Bucharest. From big concerts at Sala Palatului to gigs by local bands in bars there's plenty of live music here. Expat haunts Mojo and Coyote Ugly have live music and more 'local' venues include Green Hours and the Art Jazz Club. Loads of theaters, ballet, opera and symphonies in grand old buildings, it's all here. Various monthly/weekly guides can be picked up in bars, cafes and hotels.

Beyond Bucharest Romania is rather different. Transylvania is one of heir to the British throne Prince Charles' favorite holiday spots and Romania's largely untapped potential for eco-tourism is bemoaned by politicians and the tourism industry alike. The Danube Delta and the extensive virgin forest are two of Europe's few surviving wilderness areas.

The Black Sea beaches may not impress veterans of the Med and the Caribbean but it's always an option in summer. Much better for now are Romania's ski slopes. The nearest pistes are less than two hours by train, in Sinaia, and the same train continues past other skiing spots Azuga, Predeal and eventually Brasov. Romania's slopes are not particularly high- under two thousand meters, and as a result conditions can be unreliable. However, anyone living in Bucharest can keep an eye on the weather and go when conditions are good.

Vineyard visits in Dealu Mare are within an hour of Bucharest, and so are eminently day tripable. Romanian wine can be very, very good. Cheaper Romanian wine is often semi-sweet (demi dulce) so fans of dry wine need to keep an eye out for 'sec' when buying cheap.

Public transport is, depending on who's commenting, either very good or absolutely terrible. The reality is that it's possible to get pretty much anywhere in Bucharest by public transport. The metro is cheap and easy to use; RON 10 for ten journeys or RON 50 for a month's unlimited travel. And it's fast. During the rush hour a trip from the north of the city to the center will be much faster by metro. The only drawback is the limited number of routes possible. Buses, trams and trolley buses cover the rest of the city. They can get crowded, they can be slow, but they get there, and more and more have on-board information on transport connections. Bucharest's taxi service is reasonably priced in general, around RON 1.39 per kilometer during the day, this makes a typical journey in central Bucharest cost around RON 10, or slightly over EUR 2. Traveling into town from the Baneasa area should cost about RON 30. Some companies now offer online booking, it can however be very difficult to find a taxi at rush hour in bad weather.

Later edit: As in life, so in this article, I've completely forgotten shopping. Although no authority on the subject, even I can see there are more shops. Bucharest now boasts Zara and H&M, so Romanians can look like everyone else in Europe. Ikea's also here, so homes can look like everyone else's too. There are, I believe, malls in Bucharest. Lots of them, they've been breeding like vermin since I was last here. They contain, I suppose, shops, where people can buy... things. Malls are also the number one leisure time destination - whatever melts your butter.

No introduction to Bucharest would be complete without a mention of the stray dog population. Originally caused by pet dogs being turfed out when housing was collectivized during the communist era, this problem has- yes, I can't resist it- dogged Bucharest for decades. Although there are some attacks, most strays aren't aggressive. It's worth remembering that dogs are territorial and can react aggressively if they feel threatened. Also a pack of dogs is definitely something to be wary of.

Otherwise Bucharest is a fairly safe city to be in. There are always stories of scams and corruption but violent incidents are almost certainly far lower than in big western European cities. There's a lot here to see and do and, in my opinion, Bucharest is a very likeable city and great place to live.