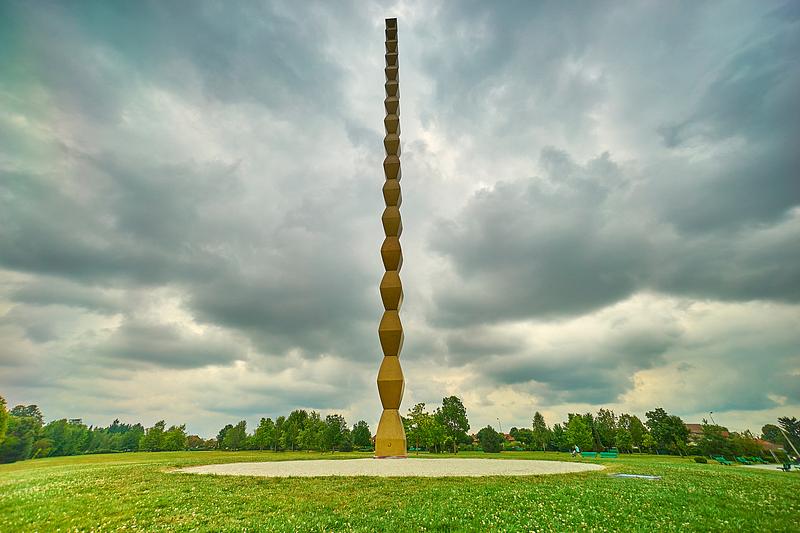 Sometimes a visit to the museum or a gallery is not required to get a dose of art. From sculpture parks to constantly updated work, we outline some of the outdoor options below.

Târgu Jiu is probably the best-known place in Romania to see the works of Constantin Brâncuși. The Calea Eroilor (Heroes' Path) ensemble, inaugurated in 1938, includes the iconic Endless Column, the Gate of the Kiss, the Table of Silence, and the Alley of the Chairs. The celebrated Romanian-born sculptor was asked in 1934 to design a monument to honor the memory of the Romanians who died near the Jiu river during World War I. Aretia Tătărăscu, president of the National Women's League of Gorj and the wife of the prime minister Gheorghe Tătărescu, led the effort to ask the sculptor to create the ensemble.

The site was not very well maintained before 1989. In 1996 the Endless Column was placed on the World Monuments Watch List of 100 Most Endangered Sites to point to the poor conservation state of the ensemble. Restorations of the Endless Column and the stone sculptures on site were carried out between 2000 and 2004.

In the 1970s and 1980s, a series of sculpture camps were held in various locations in the country. The camps were meant mostly for recent sculpture graduates, but artists of other generations also attended. Most local sculptors who created reference works in the 1970s and 80s attended one of these events, which resulted in several 'sculpture parks.'

In Căsoaia, where more than 70 works were created some 40 years ago, the overgrown vegetation was cleared in 2019, and the local authorities announced at the time plans to promote the site more. The National Museum of Contemporary Art (MNAC) in Bucharest keeps an archive of various materials concerning the phenomenon of the sculpture camps here.

Romanian artist Dan Perjovschi, whose drawings have been disseminated on the walls of museums all over the, created Ziarul orizontal (The Horizontal Newspaper) in Sibiu in 2010. Also referred to as "Perjovschi's Wall", it covers a 30-meter long public wall, close to the Radu Stanca Theater, and includes the artist's take on various local and global news and topics. The artist permanently updates it, and this happened during the lockdown as well. More recently, Perjovschi drew on the walls of the vaccination center in Fierbinţi, bringing the spotlight to the vaccination effort.

The village of Vlaha, in Cluj county, is the place where visitors can see the works of sculptor Ernő Bartha, displayed in the Arkhai Sculpture Park. The artist transformed a plot of land previously used for agriculture into the site that welcomes visitors today. Bartha is known for his hay sculptures enforced with steel frames. During the 2021 Cultural Olympics held in London, three of his works went on display in the UK capital. Bird and Skyscraper were set up on West Lake, Victoria Park, while Time Spiral, a monumental sculpture weighing more than a tonne, was placed in London Pleasure Gardens. In 2019, his work Skyscraper was displayed in Paris's Jardin du Luxembourg park. More details about visiting are available here.

Several museums in the country also hold outdoor exhibitions on various topics, not all art-related. In the capital, the Bucharest Municipality Museum regularly displays on the fence of the Suțu Palace either photography, drawings or reproductions of artworks. In Sibiu's Huet Square, the Polish Institute and the city's International Culture Center organized an outdoor exhibition outlining "The Treasures of Cracow" – art and architecture works, monuments, and examples of immaterial patrimony associated with the city that was once the capital of Poland. The exhibition can be seen until June 22.