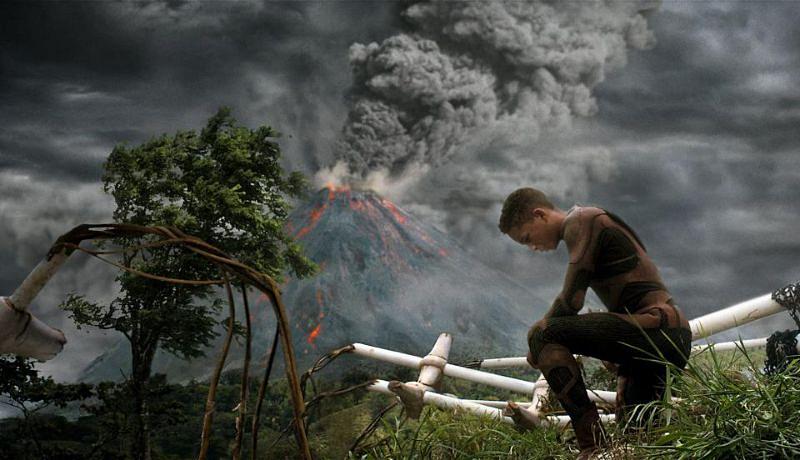 This week, American actor and writer James Longshore reviews the new science fiction film After Earth, directed by M Night Shyamalan and starring Will Smith and his son Jaden Smith. Will Smith also wrote the story on which the film is based.

On their journey to After Earth, the Smith family have brought a lot of baggage with them. Before I discuss how this affects the viewing of the movie, I’ll review the movie on its merits, as that is my primary responsibility.

It is an adventure movie. Lush settings, exotic locales. Reliable hero’s journey storyline. Though a little scary and violent, it is essentially a kids adventure movie. Predictable. Very, very predictable. Nothing much happens that wasn’t preordained from the start. Even the twists, usually a Shyamalan specialty, are easily detected, like the smell of fear to an Ursa. The dialogue is all exposition, meaning it tells us everything, or is obviously setting up later plot points, which can be easily spotted with basic screen writing training or just watching a lot of movies. This starts with an opening voice-over that serves the set up but doesn’t provide any particular insight and is never paid off, and the exposition never ends.

What the movie made me feel most, was an appreciation for Earth. The beauty and grandeur. The film makes Earth and its species look majestic. It’s gorgeous. See it on IMAX, like I did. I like the theme, of fear being an illusion, a choice, but the execution is bad. There are no challenges in which to invest. We’ve learned the lesson before the battle begins. It defeats the theme because what’s to fear when you can see everything coming? The ambitious Moby Dick theme doesn’t connect and seems forced. There are some glaring technical errors, like a bad cut that made my wife and I look at each other to say “What was that!?” And sometimes during running scenes, the dialogue wasn’t mixed right and seemed out of sync with the characters surroundings.

The movie is directed by M. Night Shyamalan, a fact which hasn’t been very heavily publicized like it used to be. This is because his previous film, The Last Airbender was considered a disaster, and his last couple, The Happening and Lady In The Water were disappointments at the box office. Smith personally chose Shyamalan to write and direct this film, maybe because, like Smith's idea for After Earth, Lady In The Water was based on a story Shyamalan wrote for his kids. Plus they are both hometown boys from Philly, the city of brotherly love.

The story takes place in the distant future and is about Kitai, played by Will’s son Jaden, a young cadet whose heroic father discovered the secret which could defeat the monstrous Ursa and preserve the human race. Kitai accompanies his father, played by Will, on a mission, during which they crash land on Earth, which has been uninhabitable for 1,000 years. Will is injured in the crash, and so Kitai must venture alone to find the wreckage of the ship, and along the way, conquer his own fear, the “true enemy”. The story is all fabricated obstacles, of which there are not many, all very obvious, and they do not raise the stakes. It is Kitai’s character flaws that are the true obstacles, and he comes off as pretty lame. There are some standard, jolting M. Night signature touches, but mostly it seems the sci-fi genre is not serving him well, and he should stick to the more personal, character driven supernatural thrillers.

Growing up, I idolized Will Smith, or The Fresh Prince, I should say. Not so fresh anymore. But Will Smith is Will Smith. We all love Will Smith. We wish he was our father. So we could be in a movie with him. Speaking of famous kids, there are others in the movie. Kitai’s ill-fated sister is played by Zoe Kravitz, daughter of rock star Lenny Kravitz. She is charming enough, probably because she comes with less baggage then the guys. The Ursa, the terrifying monsters that have evolved to hunt humans, are effectively frightening, thanks to some dazzling computer generated imagery.

And Jaden’s performance? Time to unpack the baggage. I will probably go over my word count again, but it’s worth it for the treat at the end. This movie has a lot of bad buzz. It’s the casting. Too many echoes and similarities. Son living in shadow of great father. Father teaching son to be a man. But Jaden is not a born performer like his father. So the movie has to be better. Jaden has to be better. He whines and yells a lot, and any well-paid, decent acting coach can get the emotions he displays from an amateur. And there was an acting coach, and teacher, even a dialogue coach for some silly accent, that Will doesn’t have, that is supposed to I think give a sense of evolution, but just sounds like a Brit stuck in Brooklyn for a thousand years. It feels like a gift from father to son, made for him, not for us, the audience. It takes us out of the world of the movie, and we resent it, and we mock it. Some fathers buy their kids sports cars for their birthday, Will Smith gets his kid a movie. Jaden sulks and complains and makes stupid choices and rebels against his father, who just doesn’t understand him and his pain! A typical modern spoiled American rich kid. You know what Will Smith did when he was a teenager whose parents just didn’t understand him? He wrote a song about it, all by himself, a classic that catapulted him to stardom. So, to remind us of the good old days and why we love Will Smith, why he is a born entertainer who is so popular he can get his kids movie roles and record contracts, and to illustrate the difference, I have included this link to the Fresh Prince’s classic hit song “Parents Just Don’t Understand”. Enjoy!

After Earth, featuring Will and Jaden Smith, Directed By M. Night Shyamalan, opening on screens across Romania on June 7.