Comment: Why the crowds mass in the square in front of Romania’s Government each night 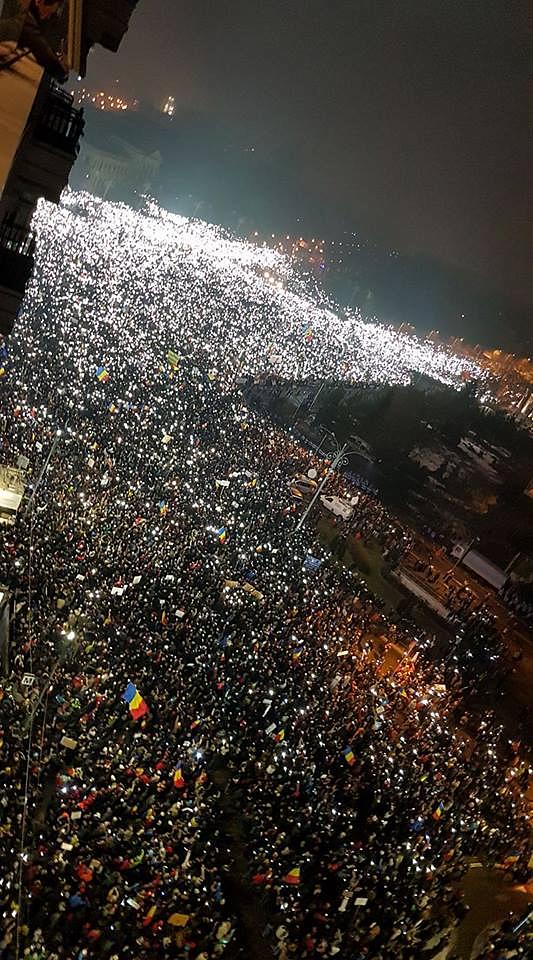 As night falls I hear the sound of vuvuzelas from the window of my office in Piata Victoriei. The crowd stayed in the square for hours last night and will do so tonight too. No speeches. They simply chant and will the government to resign.

The crowd last night (on Sunday – e.n.) was said to be 300,000. Though throughout history the size of crowds tends to be exaggerated rather than underestimated. The whole population of Bucharest is only 1,900,000 including children and oldsters and people in prison.

There are quite a lot of people in prison, of course. The prisons are very overcrowded. They include a lot of people who used to be in politics or running businesses and they are the reason why the Romanian government made its sudden decision, late Tuesday evening, without a word of warning, to grant an amnesty for large numbers of prisoners and to decriminalize bribe taking where the bribes are less than 44,000.

The government withdrew the measure at the weekend after four days of massive protests around the country, saying not to do so was to divide the country. But the political crisis continues.

This is Romania’s Maidan.

It’s a tradition that began when the crowds turned nasty as Ceausescu spoke to them on December 21, 1989. These protests involve the population in the way that democracy involved everyone in ancient Athens.

Why are they doing this? To make their country a better place for their children than it is for them. To give young people a reason not to emigrate and give emigrants a reason to return. They are providing a wonderful example for all Europeans.

The real leader of the government is a man called Liviu Dragnea, the leader of the Social Democratic (post- Communist) party, who is not allowed by law to take public office because he has been convicted of a technical offence against electoral law.

He is not an attractive or charismatic man. He is, in fact, scary. Not a man to fall out with, you’d decide on meeting him.

An old-fashioned figure, reminiscent of the Romanian past. He has blamed the multinational companies and foreign governments for the protests.  This is the thinking of Vladimir Putin who blames the CIA for the Ukrainian revolution.

Though the Americans did try their best to encourage democracy in Ukraine under Yanukovych and have doubtless put heavy pressure on the Romanian government to withdraw the executive orders.

Mr. Dragnea also accused employees of multinationals and NGOs of being the ones taking part in the protests. In fact, people of all types have done so but the people who work in foreign companies, often considered a bit dull by their peers, are a very important force that is changing the country for the better.

There is a universe of difference between local and multinational companies and Romanian politicians have the weaknesses you find in Romanian companies. Leaving aside the question of whether they are corrupt (which they usually are) they tend, with a few (usually female) exceptions, just not to be very good at politics.

To use a rugby expression, appropriate for a country where rugby is very popular, they fumble the ball. They get things wrong.

Liviu Dragnea is an example of a typical Romanian boss who micromanages his employees in every detail.

Power is something to be hoarded in Romania, where no one trusts other people much. Waiting for Dragnea to decide how to respond to the early protests cost time and gave his enemy President Iohannis the chance to take the initiative.

Before the corruption amnesty ordinance was approved by the Prime Minister, the Minister of Justice had assured the Prime Minister that all the necessary consultations with the Council of Magistrates had taken place. This was not the case.

Most important this was the behavior of a bunch of people who felt that their recent election victory allowed them to do as they pleased without regard to public opinion.

It was a grave blunder and the party will pay for it, starting with Liviu Dragnea.

He was, a week ago, the powerful architect of a handsome victory and is now the architect of a self-inflicted and unnecessary defeat. His enemies in the party, who smell weakness like a shark smells blood, will prepare to devour him.

And the amnesty? Expect some measure to be brought to parliament where most of the opposition will be as grateful for an amnesty as the PSD – the opposition parties are pretty much as corrupt as the PSD, with the notable exception of one - the newly formed Save Romania Union.

This is why the crowds stay in the square before the government headquarters.