Bucharest Centennial: The Palace of Justice – a landmark in the development of public power in Romania 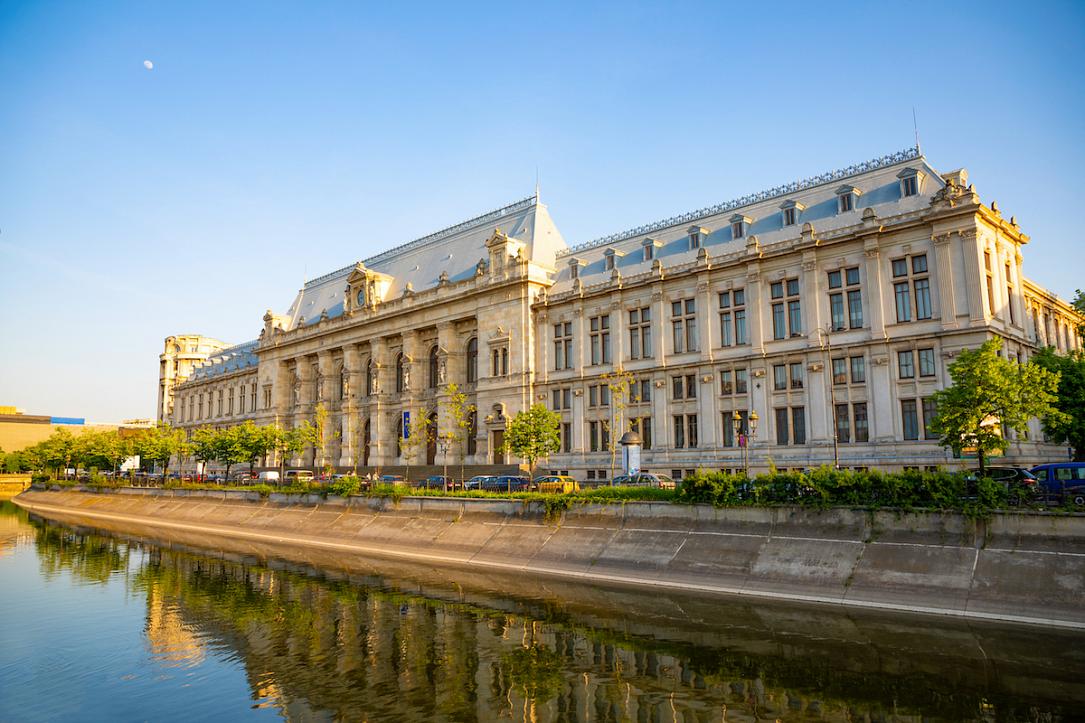 In 1866 Romania adopted a new Constitution, the first one without the approval of foreign powers and a first juridical manifestation of the Romanian state, prior to the declaration of independence of 1877. It turned out to be the longest-lasting one so far, providing the framework for the development of the Romanian state towards modernity and democracy. Later, in 1890, the law of the judicial organization was introduced, stipulating the principle of the Irremovability of Judges to ensure the independence of justice.

In the context of these transformations that targeted the judicial area, the decision to build a palace dedicated to justice – The Palace of Justice – was taken. The new edifice was meant to solve the space issues of the old Judicial Court and better serve the capital of a new kingdom that was focused on development.

The construction works started in 1890, when King Carol I laid the foundation stone himself. It was inaugurated five years later. At that time, Romania had declared its independence, a step forward in the process of affirming the national unity that would culminate with the Great Union of 1918.

The same year of 1890, the construction of the bridge over the Danube also started. The bridge was initially called the Carol I bridge, and was renamed the Anghel Saligny Bridge beginning with the communist period. King Carol I saw the bridge as a project of European importance, while about the Palace of Justice he explained it was “proof of our wish to give justice a place worthy of its high mission.” In his turn, the justice minister at the time, Eugeniu Stătescu, spoke of the mission of the magistrates and of the Bar to turn the palace “into a veritable temple of fairness.”

The palace is part of a wider series of public edifices that were made possible through a dedicated law which stipulated “special prescriptions” for carrying out and paying for the works. The Justice Ministry received 3 million lei to build the Palace of Justice and by the time it was finalized, the costs reached 6.5 million lei.

At the inauguration of the building, an official document was drafted on parchment. It stipulated that the King left the palace to “the judicial corps in the capital.” The document was drafted in three copies: one was built into the palace, while the others were deposited at the State Archives and at the Justice Ministry.

The edifice was built after the plans of French architect Albert Ballu, who also worked on the Palace of Justice in Charleroi, Belgium, and on numerous projects in Algeria, France and Corsica.

As it was the case with the Charleroi palace, the architecture follows the style of the French neo-Renaissance. Later, Romanian architect Ion Mincu worked on the finishes and on the interior design. The Hall of the Lost Steps is also attributed to him. The hall takes up a quarter of the 13,000 sqm of the surface of the building on ground.

The main facade sits towards the Dâmbovița river, with six allegorical statues placed above the main entrance of the palace. These represent Attention, Vigor, Law, Justice, Eloquence and Truth. The palace is also fitted with an exterior clock, framed by two other statues, representing Force and Prudence. The statues were created by G. Vasilescu and by Carol and Frederic Storck, the son and the brother of sculptor Karl Storck. The latter has in Bucharest works such as the statue of Carol Davila, in front of the palace of the Medical School, or the statue of politician Mihail Cantacuzino, in the yard of the Colțea Hospital. Other important exterior decorative elements of the palace are the law tablets.

The access to the Hall of the Lost Steps is made through one of the three main doors or the two secondary, double doors. The hall was also named the Hall of the Horologe, after the clock set here to show the time of the cases.

The palace was repaired and expanded between 1932 and 1937, and four building blocks were added, as well as an additional access through the main façade. With the financial support of the Union of Lawyers in Romania, the building blocks facing towards the Domnița Bălașa Church and the Gheorghe Danielopol street were built. The library and the chancellery of the Bucharest Bar were housed here at first.

The palace underwent another interior remake in 1946 to accommodate the increase in staff, and major repairing in between 1954 and 1956 in order to have it turned into a Palace of Culture.

The 1977 earthquake affected the building seriously, and partial consolidation works followed. Not the same thing happened after the 1986 earthquake. The edifice entered a process of major repairing works, consolidation and restauration only beginning with 2003. The works, finished in 2006, entailed a remake of the interior yards and of the facades. For the latter, special stone brought from Buzău county was used. The stone, concrete, marble and wooden elements were cleaned, restored or replaced. The massive oak doors, the paneling in the 14 court rooms and the decorative elements made of oak wood were also restored.

Once the works ended, the Bucharest Court of Appeal, the District 5 Court, the Association of

Romanian Magistrates, the National Union of Bars in Romania, and the Bucharest Bar reestablished their presence in the Palace of Justice.

The palace also hosts a permanent exhibition which includes, among others, a presentation of the history of justice in Romania and of the building, and a small-size replica of a court room.

Nicolae Noica. Lucrări publice în vremea lui Carol I (Public Works during the Time of Carol I) at historia.ro