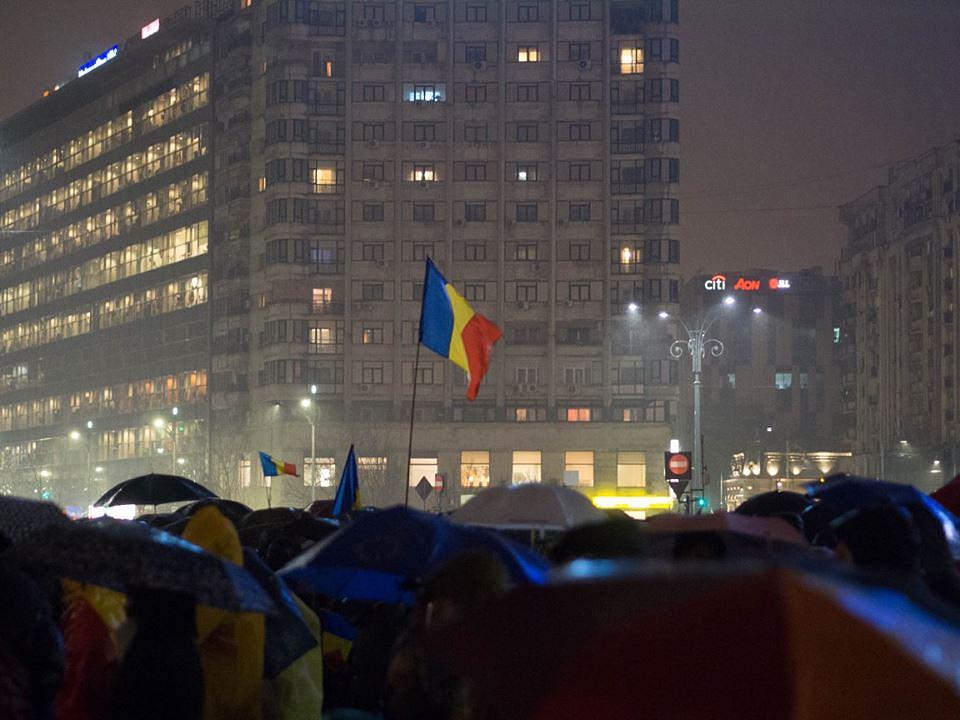 The anti-Government protests continued last weekend in Romania, despite the bad weather, as people still want the cabinet led by Sorin Grindeanu to resign.

On Saturday, some parents took their children in Victoriei Square in Bucharest, to a so-called “children’s protest.” The demonstrations lasted about four hours. In this period, the children played with each other, made drawings on the asphalt with colored chalk, or wrote messages such as “I don’t lie,” “I don’t steal,” “I don’t quit.”

The “children’s protest” was organized despite the fact that the Child Protection authority has received dozens of complaints about the fact that people take their children to protests.

A few thousands Romanians also took to the streets on Sunday evening, for the 20th consecutive day, despite the bad weather and low temperatures.

Some 2,500 people protested against the Government in Bucharest’s Victoriei Square on Sunday, February 19, although it was raining and the temperature was low, at around 2 degrees Celsius. The same happened in other major cities in Romania. For example, more than 3,000 people protested in Cluj-Napoca, and some 1,000 took to the streets in Timisoara. Around 500 people also protested in Sibiu, central Romania, despite the cold weather and the sleet.

A few hundred people also attended anti-Government protests in Brasov, Sibiu, and Galati, while a few others protested in cities outside Romania, such as London, Berlin, Copenhagen, Milan, and Paris.

However, the pro-Government and anti-President protests also continued in Romania. Nearly 100 people gathered on Sunday in front of the Cotroceni Palace in Bucharest, the official residence of President Klaus Iohannis, to demand the President’s resignation and show their support for the Government led by Sorin Grindeanu. It was the 15th consecutive day when people protested at the Cotroceni Palace.

On Saturday, some members of the Social Democratic Party (PSD) Arges also organized a demonstration in Pitesti, attended by some 4,000 people. PSD is the ruling party is Romania, which formed and supports the current Government. During the protest, the people chanted slogans against President Iohannis, and expressed their support for the Government. The organizers said that the protest was just an exercise, and that they could organize an even bigger protest in Bucharest, reports local Adevarul.

The anti-corruption protests in Romania also inspired other similar protests in Europe. Some 2,000 French citizens gathered in Paris on Sunday, to protest against corruption, reports France Info. The event was organized on Facebook and, according to its presentation, it was inspired by the demonstrations in Romania. Meanwhile, Le Monde reports that similar protests also took place in several other French cities, such as Rennes, Lyon, Strasbourg, Toulouse, and Saint-Omer.

The protests started in Romania almost three weeks ago, when the Government adopted in a late meeting an emergency ordinance that would have changed the Criminal Law. The protests have continued every day day since then, although the Government repealed the ordinance, and the justice minister resigned.