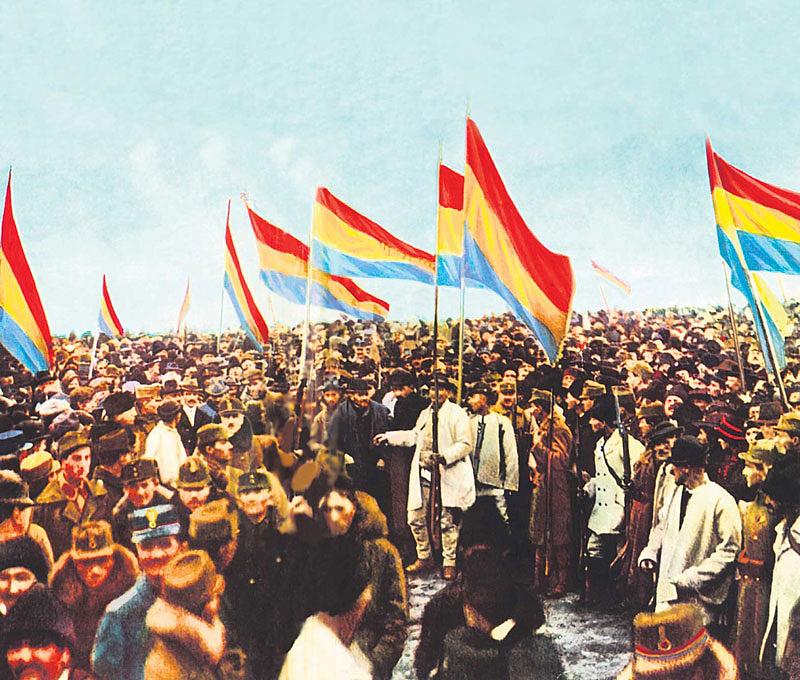 On December 1 this year, Romania not only celebrates its National Day but also marks 100 years since the 1918 Great Union - the major historical event that changed the country’s course in history.

100 years ago, one of the Romanian nation’s biggest and most important political goals – the Great Union – finally happened. The Union marked the country’s history forever, but Romania had to pass through many other changes and challenges since then, including World War II, the Communist regime and the 1989 Revolution.

The end of World War I, one of the bloodiest events in the world’s history, was soon followed by one of the most important historical events in Romania’s history – the Great Union of 1918, which brought hope to all Romanians. The Great Union represented the unification of all provinces where the Romanians were in the majority, namely Transylvania, Banat, Crisana, Maramures, Bessarabia, and Bukovina, with the Kingdom of Romania, to form one national state. On December 1, 1918, the National Assembly in Alba Iulia was held, where the 1,228 elected delegates unanimously adopted the union resolution. The unification declaration was read during a public event attended by over 100,000 Romanians.

In 1940, the territorial gains Romania made after World War I, when the country had greatly expanded its territory, were mostly undone. In July of that year, Romania lost Bessarabia, northern Bukovina and the city of Herts to the Soviet Union. Shortly after, in August, Hungary received the region referred to as northern Transylvania. Following these events, Romania entered World War II, in June 1941, on the Germans’ side and against the Soviet Union, wanting to reunify its territory. The liberation of Bessarabia and northern Bucovina was done in July 1941, while in October the Romanian Fourth Army conquered Odessa.

Romania-Soviet talks were resumed in Stockholm in April 1944, when the Soviet government presented the minimum terms for a truce, which included going back to the 1940 border, war damages, and the return of most of Transylvania back to Romania. However, Romania rejected the conditions of the truce in mid-May. By August 1944, the Soviet troops broke the German-Romanian front in Moldova, proving that Romania couldn’t hold on for much longer.

On August 23, Marshal Ion Atonescu announced King Michael I that he was willing to sign the truce after the front was stabilized and Hitler gave his approval. The King ordered the dismissal and arrest of Antonescu. In a radio broadcast to the Romanian nation and army later the same day, King Michael issued a cease-fire, proclaimed Romania's loyalty to the Allies, announced the acceptance of an armistice (signed later on September 12) offered by Great Britain, the United States, and the USSR, and declared war on Germany.

Under the 1947 Treaty of Paris, Romania had to accept tough political, economic and military conditions, but northern Transylvania was, once again, recognized as an integral part of Romania.

The abdication of King Michael I

His following years were complicated as well, given that the World War II was ongoing. On August 23, 1944, at the age of 22, King Michael took the most important decision of his reign. He ordered the arrest of Marshal Ion Antonescu, who had led Romania to fight alongside Nazi Germany in World War II, and decided that the Romanian Army should fight alongside the Allies. His decision reportedly shortened World War II by some six months, helping save hundreds of thousands of lives.

He was 26 years old when he was forced to abdicate, on December 30, 1947, at a time when the country was led by Petru Groza’s Communist-controlled government. The king had tried to oppose Groza’s government from August 1945 to January 1946, by refusing to sign and endorse its decrees.

Soviet Union occupation following World War II facilitated the rise of the Communist Party in Romania. This led to the forced abdication of King Michael I and the establishment of a single-party people's republic in 1947, which made Romania move towards a centralized economy while the private enterprises were nationalized. The early years of Communism in Romania were marked by repeated changes of course and by numerous arrests and imprisonments as factions contended for dominance. Once the Communist government became more entrenched, the number of arrests increased, mainly targeting intellectuals, clerics, teachers, and former politicians. The existing prisons were filled with political prisoners, and a new system of forced labor camps and prisons was created. The prisoners were subjected to forced labor, starved and tortured.

Also, several human rights restrictions came into force, such as the policy that outlawed abortion and contraception, or the invasion of privacy by the secret police. Dictator Nicolae Ceausescu’s desire to repay all foreign loans made things even worse, as this enacted a harsh austerity policy, including rationing food, gas, heating and electricity.

The ruling of Nicolae Ceausescu

Nicolae Ceausescu, the last leader of Communist Romania, came to power following the death of Gheorghe Gheorghiu-Dej in 1965. He was elected general secretary on March 22, 1965, three days after Gheorghiu-Dej's death. One of his first moves was to change the name of the party from the Romanian Workers' Party back to the Communist Party of Romania and to declare the country a socialist republic. Although his ultimate goal was to turn Romania into one of the world's great powers, the oppression and bad life of Romanians led to the Revolution of 1989, which ended the Communist era in Romania and led to the execution of Ceausescu and his wife.

A series of protests and street demonstrations erupted in Romania in December 1989, the local civil unrest being part of the Revolutions of the same year that occurred in several countries. The Revolution in Romania began in Timisoara, spreading fast across the country, and culminating with the short trial and execution of dictator Nicolae Ceausescu and his wife on the Christmas day of 1989. The two were the last people condemned to death and executed in Romania.

More than 1,100 people were killed during the Romanian Revolution, with most deaths happening after the protests that led to the overthrow of Nicolae Ceaușescu (December 16–22, 1989). Although many years have passed since then, the prosecutors are still investigating the 1989 Revolution events.

After the 1989 Revolution, which ended the Communist era in Romania, the Romanians were ready and hoping for a new start. The political vacuum was filled by the National Salvation Front (FSN), formed by second-rank Communist party members opposed to the policies of Ceausescu and participants in the revolt. Ion Iliescu was acknowledged as leader of the organization, and FSN ran as a party in the 1990 general elections - the first free, multi-party elections held in the country after World War II. FSN won the elections and its leader Ion Iliescu also won the separate presidential elections, becoming Romania's first democratically elected head of state. Iliescu was the president of Romania between 1990 and 1996, and between 2000 and 2004. His political career after the Revolution was marked by multiple controversies, however, such as the miners' riots of 1990 and 1991 and the fact the that King Michael I was not allowed in the country for five years, between 1992 and 1997.

The new Constitution of Romania was adopted in November 1991. It was approved on December 8 of the same year, in a national referendum, and promulgated on the same day. Its text was amended only once so far, in October 2003, also by referendum. The idea of a second revision surfaced in 2010 and has been discussed in the years to follow, but nothing concrete has happened so far.

Romania joined the North Atlantic Treaty Organization (NATO) in late March 2004. It was a big step for Romania, as this decision had a major influence on the foreign and domestic policy of the country. In early April 2008, Romania hosted the NATO Summit in Bucharest, which is one of the biggest foreign policy events organized by Romania. As a NATO member, Romania takes part in all Alliance missions and operations, including those out of the Euro-Atlantic area.

Romania is one of the most recent members of the European Union (EU), joining in 2007, the same as neighboring Bulgaria. The country signed its Europe Agreement in 1993 and submitted its official application for membership in the EU on June 22, 1995. Both Romania and Bulgaria implemented several reforms to prepare for EU accession, which targeted the democratic system, the rule of law, human rights, and a free-market economy. However, as the concerns about corruption in the two countries were still high, both Romania and Bulgaria have been monitored by the European Commission through the Mechanism for Cooperation and Verification (CVM).

(Photo source: Romaniancenteenary.org; This was one of the few photos of the Great Union assembly in Alba Iulia on December 1, 1918, that were taken by Romanian war photographer Samoila Marza)